Edward Cornwallis, Nova Scotia's first governor, has his name memorialized on a Halifax park and a street 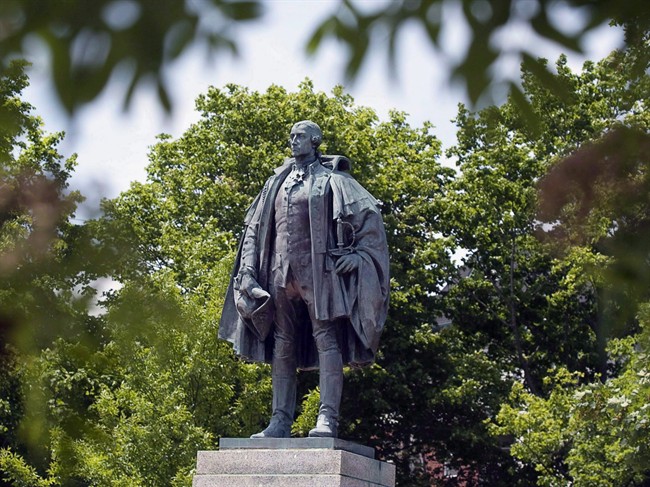 A statue of Edward Cornwallis stands in a Halifax park on Thursday, June 23, 2011. (Andrew Vaughan/CP)

HALIFAX – Halifax council will consider a proposal to scrub the city of the name of its controversial founder, Edward Cornwallis.

Councillor Waye Mason plans to bring forward a motion on municipal “commemorations” of Nova Scotia’s first governor, including a park and a street bearing Cornwallis’s name.

A spokesperson for Mayor Mike Savage said Thursday he supports the motion’s introduction, which will likely come next week.

The proposal comes in response to campaigns throughout the province to remove Cornwallis’s name from public places in light of his treatment of indigenous people.

Cornwallis founded Halifax in 1749. Later that year, he issued a bounty on the scalps of Mi’kmaq men, women and children.

“Why would I want to idolize the man?” Mi’kmaq elder Dan Paul, who has led the charge to rename these sites, said in an interview this week. “You don’t see a Jew idolizing Hitler, do you?”

The Mi’kmaq Native Friendship Centre, which borders Cornwallis Street, sent a letter to council in April asking the street be renamed.

“Since we opened … we have suffered the humiliation,” the letter reads. “The argument that what Cornwallis did to the Mi’kmaq was the result of different times and values does not wash.”

The Cornwallis Street Baptist Church, a mostly black congregation, sent its own letter to council in support of the centre, calling the name an affront to the Mi’kmaq.

Halifax is also contemplating the future of a statue of Cornwallis opposite the city’s train station.

The Cornwallis controversy extends throughout Nova Scotia. The military leader is also the namesake of Cornwallis River and Cornwallis Park in the Annapolis Valley.

A group calling for the Cornwallis River to be renamed is presenting a plan to regional councils next month.

Not everyone agrees these sites should be renamed.

When Paul succeeded in renaming a public junior high school in 2001, then-mayor Peter Kelly likened it to sanitizing history.

“You look at the statue (of Cornwallis in Halifax), and that is sanitized history,” Tattrie said in an interview Thursday.

The biographer said Cornwallis plundered the Scottish Highlands, organized the expulsion of the Acadians, and ordered the scalping proclamation. “All of that of that is scrubbed from history, and it leaves us ignorant.”

Tattrie suggested tributes to Cornwallis be evaluated on a case-by-case basis, saying some communities have attachments to sites unrelated to their namesake.

“I think a lot of people feel like it’s someone telling them they can no longer have their own last name,” Tattrie said, “Once they move past that immediate reaction, there’s a conversation to be had.”

“He felt it was inappropriate that there would be a sign there that recognized Cornwallis very close to that Mi’kmaq community,” McNeil told the provincial legislature.

Mason said in an email Thursday he’s still working on the wording of his motion, which would cover all “municipal assets.”

“I have been engaged in this dialogue, asking the question, ‘What do we do as a society with commemorative landscapes that are unrepresentative of present values?'” Mason said in a statement last year.