From antennas to swipe screens, cellphones will mark 30 years in Canada in July 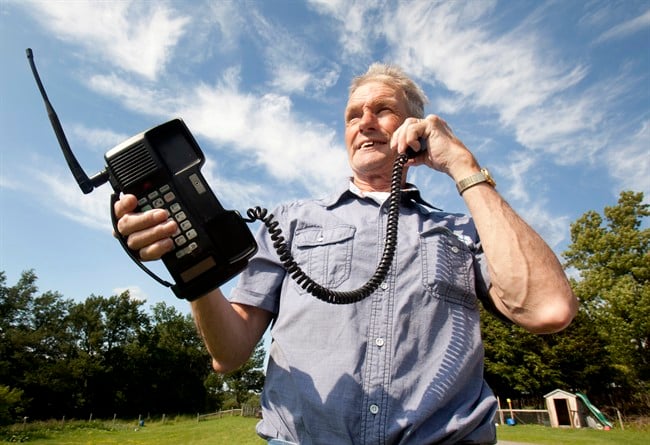 Victor Surerus poses for a photo at his farm in Roseneath, Ontario, on Wednesday, June 24, 2015 with the first cell phone in Canada. (Fred Thornhill/CP)

TORONTO – Victor Surerus says the $2,700 he paid for his first cellphone 30 years ago was worth every penny.

It was July 1985 and Surerus says he needed the phone to help run his business as a travelling funeral director out of Peterborough, Ont. The phone attached to an aerial in his car and came with its own carrying bag.

He says his contract with Bell made him the first cellphone customer in Canada, though the company doesn’t have records that can confirm that. Bruce Cole of Richmond Hill, Ont., says he was also one of the earliest adopters of the nascent technology.

“This way you had the freedom of doing things and you weren’t tied down,” he says now from his home in Roseneath, Ont.

“The price was high to pay for it, but it was worth it.”

Cellphones debuted in Canada with a call between Art Eggleton and Jean Drapeau, then the mayors of Toronto and Montreal respectively, on July 1, 1985.

The regional monopolies that dominated the telephone industry in the early 1980s were concerned that mobile phones would disrupt their grip on nearly every aspect of the market.

Francis Fox, then the federal minister of communication, says the phone companies would defend their turf by saying their industry was heavily regulated and the CRTC was there to protect the consumer.

Shrugging off pressure from the Reagan administration to choose a bid from an American company, Fox and his team awarded the rights to the first private cellphone network to an upstart company that later became one of the three dominant players in Canada’s wireless sector: Rogers.

Fox says the recent quarrels between the federal government and Rogers, Telus, and Bell over competition are echoes of the arguments he heard 30 years ago involving the landline monopolies.

“What goes around comes around,” he said.

Rogers Wireless executive vice-president Raj Doshi joined the company in 1989, when it was still Cantel AT&T and mobile telephones were still a luxury item.

Doshi has the original Cantel ad from January 1985 announcing “the end of the line for the telephone” framed in his office as a reminder that back then, competition was less important than explaining why people needed to spend thousands of dollars on a cellphone.

Wade Oosterman, now president of Bell Mobility, remembers it differently. In the mid-1980s he worked with George Cope, now Bell’s CEO, getting Clearnet Communications Inc. off the ground, which was later bought by Telus.

“It was competitive right from the get-go,” he said. “The cost of building out Canada is extraordinarily high: big land mass, relatively few people. When you’re spending that kind of money on deploying your network, every single subscriber really, really counts.”

The high price of cellphones eventually fell as technology advanced, networks matured, and new competitors such as Wind Mobile and Videotron entered the market, while others such as Public Mobile and Mobilicity were snapped up by the big three incumbents. Regional players Sasktel and MTS carved out a niche in the Prairies, becoming dominant in their regions.

“Canada and everybody who played a role in it should be quite proud of the state of the wireless industry in Canada today and the benefit it confers on consumers and businesses alike,” Oosterman said.