How you feel about John Paul II will tell you how you'll feel on April 2. 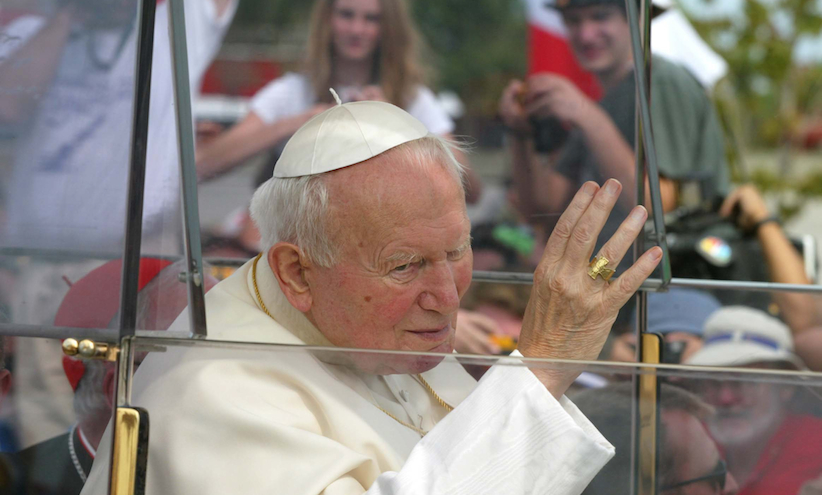 From the website of Conservative MP Wladyslaw Lizon (Missisauga East-Cooksville) comes word that his private member’s bill, C-266, An Act to Establish Pope John Paul II Day, has received royal assent and is now law. The new law designates April 2 as “Pope John Paul II Day.” This won’t be a legal holiday, just a chance for people to pause once a year, if they like, and say, “Hey, John Paul II.”

Last night on Twitter, Employment Minister Jason Kenney congratulated Lizon, a former head of the Canadian Polish Congress, on his success. I retweeted Kenney’s message, and a lot of my Twitter followers got very angry very quickly. The notion that a Roman Catholic pope should get any official recognition is one that a lot of people find upsetting.

I’m mostly one of the other kind of people, the kind who understood immediately why John Paul II should be commemorated: for his intimate role in rallying his native Poland and the rest of the Warsaw Pact against European communism. This sort of thing occasions a lot of eye-rolling among Canadian sophisticates: “Oh, well, communism . . . Are we going to have a day to thank Noam Chomsky for resisting capitalism?” But for millions of Canadians with direct personal experience, or family tales, of what it was like to live behind the Iron Curtain, the memory of John Paul II’s contribution is real.

And of course, there’s an electoral calculation, too: Canadians from formerly communist countries, and Poles, especially, will take note of this move and remember it in elections to come.

There are also, of course, plenty of people who take a far dimmer view of John Paul II’s legacy. They’re likelier to mention sexual abuse in the Church, and the AIDS epidemic in Africa, as reasons why no pope should get such an honour in Canada. There were duelling petitions on the bill, and the Commons debate reflected a lot of tension. NDP Leader Thomas Mulcair voted against the bill, as did much of his caucus. (The splits there are fascinating. Peggy Nash and Andrew Cash voted yes; Niki Ashton and Megan Leslie voted no.) The Liberals voted for it unanimously, including Leader Justin Trudeau. Well they might: Two weeks earlier, the Liberal-dominated Ontario legislature passed a near-identical bill designating April 2 (the day of John Paul II’s death) as Pope John Paul II Day in Ontario.

That bill’s sponsor was Dipika Damerla, the Liberal provincial member from the same Mississauga East-Cooksville riding Lizon represents in Ottawa.