Harper and Quebec announce plans for Gulf of St. Lawrence

Ottawa and Quebec set to put forward legislation to allow for the joint management of the petroleum resources in the Gulf of St. Lawrence 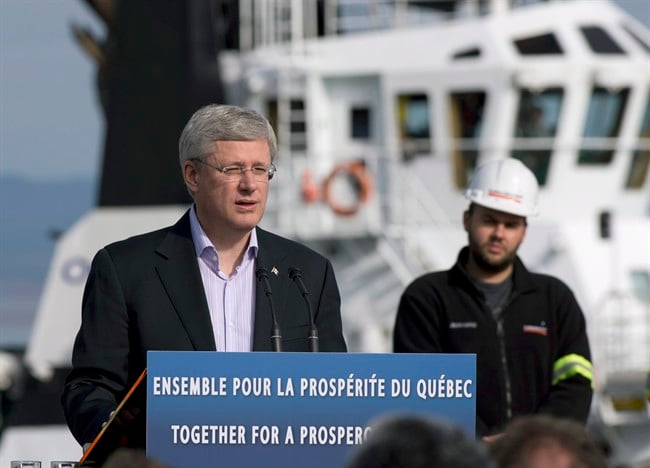 SEPT-ILES, Que. – Prime Minister Stephen Harper says Ottawa and Quebec are both expected to table legislation by the end of the year to jointly manage the petroleum resources in the Gulf of St. Lawrence.

Harper made the announcement in Sept-Iles on Tuesday along with Denis Lebel, the federal cabinet minister responsible for Quebec’s economic development.

“The accord will enable the safe and environmentally responsible development of petroleum resources in the region, help create hundreds of jobs and generate revenues and economic growth for Quebec and Canada,” Harper said.

Harper said Ottawa and Quebec are well-positioned to table the legislative framework to implement an accord that was signed in 2011.

Ottawa estimates that the Gulf of St. Lawrence and surrounding areas have the potential for 39 trillion cubic feet of gas and 1.5 billion barrels of oil.

Not everyone was as enthusiastic about the project as Harper.

The unseen legislation promised by both the federal and provincial governments drew an immediate backlash from groups opposed to oil and gas exploration in the area.

In July, First Nations leaders from Atlantic Canada called for a 12-year moratorium on all oil exploration in the Gulf of St. Lawrence.

“It is high time that governments started supporting First Nations and coastal communities over corporate oil interests,” Mary Gorman of Save Seas and Shores said in a release Tuesday.

The group includes fishing, environmental, tourism and First Nations organizations with a common goal of stopping energy exploration in the Gulf. Their immediate target is Corridor Resources Ltd., which plans to drill at a site known as Old Harry off Newfoundland in the Gulf.

“We want Corridor, unelected petroleum boards and federal and provincial governments to know that oil drilling cannot co-exist in sensitive spawning, nursery and migratory waters in one of the most fragile ecosystems on earth,” Gorman said.

A Montreal-based group called Coalition Saint-Laurent also issued a release demanding a pause while the issue goes to a full public review.

“The Gulf of St. Lawrence is a unique ecosystem, very fragile, shared by five coastal provinces,” spokesman Sylvain Archambault said in a statement.

“Instead of paving the way for oil exploration, Quebec should take a leadership role in the Gulf and work with other coastal provinces in the establishment of a general moratorium on oil activities for the entire Gulf, as well as holding an extensive public review on the matter.”

The federal government reached similar deals with Newfoundland and Labrador in 1985 and Nova Scotia in 1986.

Offshore petroleum production in Canada accounts for 25 per cent of light crude output and one per cent of the country’s annual average natural gas output.

Newfoundland and Labrador received $8.4 billion in royalties from the region covered by the 1985 accord and Nova Scotia has benefited from $2 billion in the area cited in their deal.