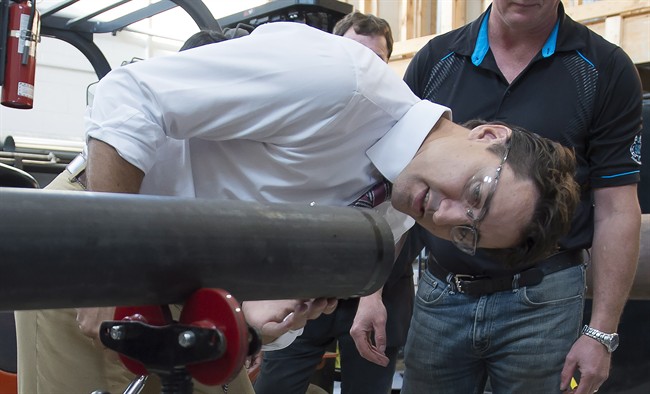 OTTAWA – Stephen Harper was hanging 10 on the crest of a surprise budget surplus Tuesday, showing off his fiscal bona fides as the federal election campaign prepared to convene in Calgary to debate the state of the Canadian economy.

In British Columbia, the Conservative leader boasted about the latest Finance Department numbers, which show a $1.9-billion surplus for 2014-15 instead of a predicted $2-billion shortfall.

At an event in North Vancouver, Harper wasted no time using the opportunity to mock the money-management skills of both Rachel Notley, Alberta’s new NDP premier, and Liberal Leader Justin Trudeau.

“We know why there’s a recession (in Alberta) — it’s not because the government ran a $2-billion surplus,” Harper said.

“There’s a recession because oil prices have fallen by half, and the recession has been made worse because the NDP government came in and followed up by raising taxes on everybody.”

Trudeau — who has linked the economic slowdown to the government’s relentless pursuit of a pre-election balanced budget — seems to think that $2-billion surplus provoked a worldwide fall in oil prices, Harper continued.

“I mean, seriously,” an animated Conservative leader said to laughter from the partisan crowd.

“They think that somehow under these conditions, plunging the country back into deficit for years to come would be a good thing. Canadians get that, given the turmoil in the world, the fact that we have a budget balanced — and we’re going to keep that balanced — is a good thing for this country.”

Trudeau has criticized the surplus as a product of underspending on vulnerable Canadians — an accusation the Conservatives deny. A Liberal government would stick with its plan to run deficits for the first three years in office, making investments in infrastructure and seniors despite the surplus, Trudeau has said.

Monday’s surplus news couldn’t have come at a better time for Harper, who will join his NDP and Liberal counterparts Thursday in Calgary for a debate on economic issues, sponsored by the Globe and Mail and Google Canada.

Before Monday, Trudeau and NDP Leader Tom Mulcair had been battering Harper for running what they called eight consecutive budget deficits; it now appears the actual number is six.

Looking forward, the Conservatives have predicted a $1.4-billion surplus for the current 2015-16 fiscal year, though opponents insist the government is unlikely to hit that projection.

The three main leaders are expected to keep a low profile Wednesday as they prepare for the debate — the second since the writ was dropped in August, but the first since the Labour Day long weekend, the unofficial start of the campaign’s second phase.

All three are now also confirmed for the Munk debate on foreign policy, which is scheduled to take place later this month.

Mulcair and Trudeau had raised concerns about how bilingual the debate would be, but after reviewing the final format they agreed Tuesday to take part.

Trudeau was in a contested southwestern Ontario riding Tuesday to promise $750 million for skilled trades funding, part of a previous $2 billion employment announcement Trudeau made a week ago in New Brunswick.

A Liberal government would give $500 million to the provinces and spend $200 million on training for workers who can’t get federal training, plus $50 million to help aboriginal people improve their skills and job prospects.

“You’ve seen your personal debt rising as your job prospects sink. You want to seek out better opportunities but you can’t access the training you need,” Trudeau told supporters and apprentices at a local plumber and pipefitter’s union.

“Stephen Harper doesn’t know what that’s like. When he was first elected, Windows 95 was still two years away … (and) the cutting-edge way to apply for a job was to send in your resume by fax.”

Mulcair, meanwhile, promised to establish a $100-million mental health innovation fund for children and youth — just the latest in a series of big-ticket health-care spending promises this week.

They include a $40-million commitment for a national strategy on Alzheimer’s disease and dementia, $500 million to build medical clinics and hire more health care professionals and $1.8 billion to expand home care and palliative services.

The NDP leader has faced pressure to explain how he plans to pay for his costly promises while maintaining his commitment to balance the books.

Mulcair says the NDP will put forward a financial breakdown ahead of Thursday’s debate in Calgary and is calling on Harper and Trudeau to do the same.