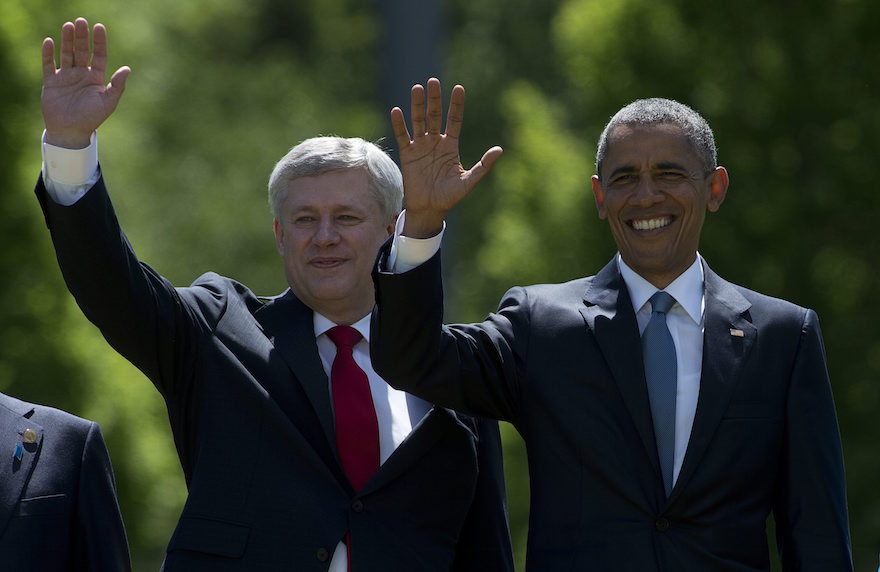 SCHLOSS ELMAU, Germany – Prime Minister Stephen Harper arrived at the G7 summit Sunday where he will face discussions on a topic he has been repeatedly criticized for not doing enough about — climate change.

Germany, with the firm backing of neighbour France, is linking climate change to global security following a report prepared for G7 foreign ministers in April that urged all countries to place climate change at the heart of their foreign policy.

“Climate change is the ultimate threat multiplier: it will aggravate already fragile situations and may contribute to social upheaval and even violent conflict,” said the report by the European Union Institute for Security Studies.

That characterization has some observers wondering whether it might make climate change more appealing to Harper because it aligns with his robust foreign policy outlook, which sees Canada taking a leading role in helping the world fight security threats.

Climate security has been on the international radar for several years, with the U.S. Pentagon and the British military issuing major studies about the security risks posed by extreme climate events.

The assessments say drought, flooding, massive storms and famines could cause widespread displacement of populations and food shortages, sparking wars and conflict.

“Obviously it is a threat,” said one G7 government official, speaking on condition of anonymity because they weren’t authorized to discuss the matter publicly.

“In the worst-case scenario, we will have all kinds of conflict because of climate change.”

A senior French foreign ministry official said Foreign Minister Laurent Fabius is seized with the issue of climate security, and is pushing it hard in the run-up to the G7 and the major UN climate change meeting in Paris in December.

“Whether in the G7 or other fora, Minister Fabius … is strongly convinced that security issues — as a matter of consequence, peace — are closely linked to this question of climate change,” said the official, who also spoke on condition they not be named.

Foreign Affairs Minister Rob Nicholson, who was at the table with his G7 counterparts in April, acknowledged the report, saying Canada takes climate change seriously and pointing to the government’s recent greenhouse gas reduction targets.

“It can have an effect on just about every level,” Nicholson said in a recent interview.

“We see changes taking place in the Arctic, for instance, and so we know first-hand the effects of climate change in this country, and so we take that understanding with us every time we sit down with our colleagues.”

Germany and France want the G7 leaders’ summit to provide some momentum for the Paris conference in December.

“Canada supports efforts to conclude a fair and effective global agreement on climate change,” Harper’s office said in a statement.

But German Chancellor Angela Merkel was more emphatic in a Globe and Mail column aimed at Canadian readers this past week: “The G7 ought to be a model for the necessary transition to a low-carbon economy.”

Merkel wants countries to commit to the Green Climate Fund, which is aiming for $100 billion by 2020. Germany recently doubled its contribution to $8 billion while Merkel has personally called on all industrial countries contribute.

Merkel and Harper are to meet later Sunday in at the picturesque mountain summit site after an afternoon of formal meetings.

Tad Homer-Dixon, the author and climate specialist at the Balsillie School of International Affairs in Waterloo, Ont., said climate change will make the world a more violent place by 2030 to 2040, so the Conservative government’s indifference has dire implications.

“I expect, given the trajectory we’re on, that the world is going to be an extraordinarily violent place in the middle of this century,” he said, citing droughts as a contributing factor to the carnage in Syria and parts of Africa.

The Conservatives may wish the climate discussion “would just go away,” but the new security dimension could draw them towards it, said Homer-Dixon.

“Once people on the right recognize the national security implications of environmental stress, then maybe they’ll start to take these issues seriously.”