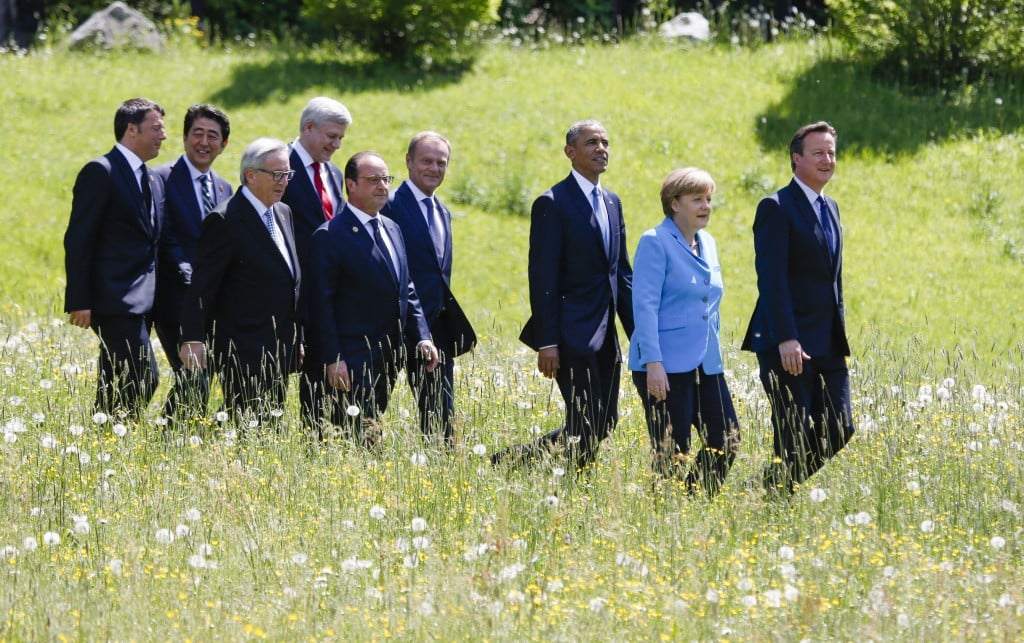 Harper’s office said he talked up the trade pact at the G7’s first working session of the day on the fragile global economy.

“Prime Minister Harper encouraged European members of the G7 to swiftly implement the job-creating Canada-EU trade agreement,” his office said in a statement.

Harper met European Council President Donald Tusk, and the European Commission President Jean-Claude Juncker, where he was expected to push the deal.

Harper said nothing about the trade deal going into the meeting, and did not meet with the travelling Canadian media on the first day of the summit, holding two photo-ops that lasted barely a minute in total.

Canada and the EU have an agreement in principle on a sweeping pact in goods and services but the legal text still must be finished so it can be ratified by Canada and the EU’s 28-member countries.

Ratifying the pact, known as CETA, would be a major political win for Harper with the planned Oct. 19 federal election looming.

“The two leaders discussed the importance of growing the still fragile global economy, including through the timely ratification of the job creating Canada-European Union Trade Agreement,” said Harper’s office.

Harper also met with British Prime Minister David Cameron, and they discussed the need to grow the fragile global economy as well as addressing two of the world’s leading security issues: the crisis between Russia and Ukraine and the fight against the Islamic militants in Iraq and Syria, said his office.

They emphasized the need for Russian President Vladimir Putin to honour the Minsk peace agreement that was seriously undermined by a renewed outbreak of violence in eastern Ukraine this week.

“The two leaders reiterated the importance of maintaining a firm and united stance on Russia’s aggression in Ukraine, and urged Putin to respect and implement the Minsk Agreement,” said Harper’s office.

Harper arrived in Germany’s scenic and mountainous Bavarian region for the G7 after stopping in Kyiv and assuring Ukrainian leaders that he would push for solutions to their ongoing conflict with Russia.

“The duration of sanctions should be clearly linked to Russia’s full implementation of the Minsk agreements and respect for Ukraine’s sovereignty,” the White House said in a statement after their meeting.