Harper saved us from a Mad Max wasteland, and other hyperbole

No man in the history of time has ever done more crucial work than Scott Feschuk, who measured the Conservatives months before the election 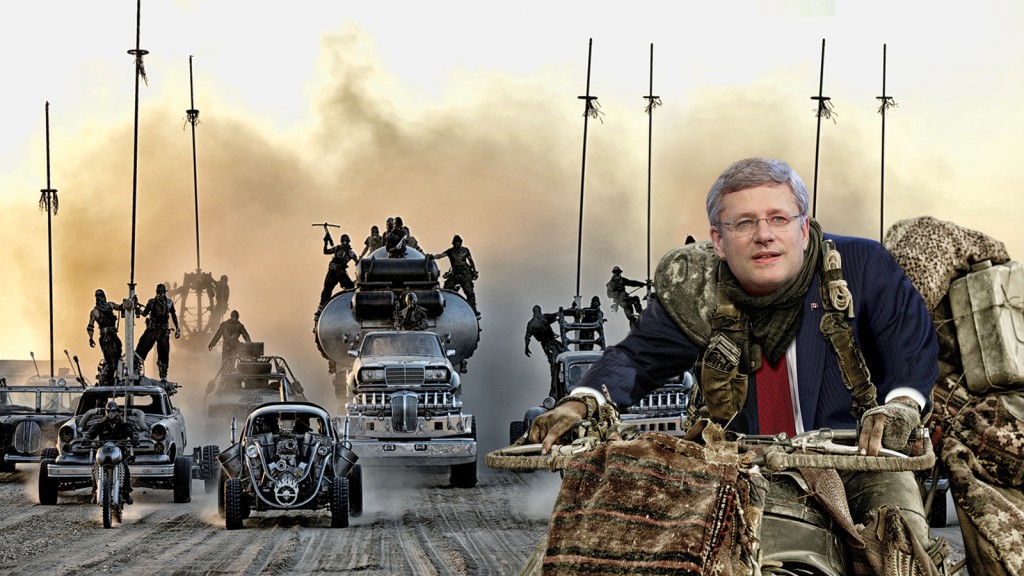 In sports, the pre-season allows athletes to ease into the rigours of competition. Our federal politicians follow a similar regimen. Right now they’re limbering up their noise holes for the October election—putting in the rhetorical reps to ensure they’ll be ready to stretch the truth at an elite level.

But something strange is happening. With still months to go, the governing Conservatives appear to be in mid-campaign form. Let’s take a closer look at some recent comments—and gauge how they rank on the Scale of Hyperbole.

Claim: “Jihadi terrorism is one of the most dangerous enemies our world has ever faced.”—PM Stephen Harper (6/10 on the Scale of Hyperbole)

Analysis: The foundation of political hyperbole is the ability to “forget to remember” certain things, such as some of the facts or all of our history.

For instance, the Harper government has a fondness for referring to the 2008 economic crisis as “unprecedented” in scope and effect. Forget about the 1980s, which gave us out-of-control inflation, interest rates at 20 per cent and a Tarzan movie starring Bo Derek for some reason. Forget about the Great Depression, even though it was in all the papers. UNPRECEDENTED.

In the same vein, Harper is portraying modern-day terrorists as our Worst. Evil. Ever. Every past menace—from Nazism to disco—pales in comparison to what he’s facing. Why? Because he’s facing it.

So why isn’t this a 10 on the scale? Points must be deducted for Harper’s use of “one of the”—otherwise known as the Coward’s Clause, used to provide wiggle room. For example, it is safer to say that a Starbucks breakfast sandwich is “one of the worst-tasting things in the world.” That way, you’re covered if someone within earshot just ate a breakfast sandwich made from gravel and used Kleenex.

Claim: “We are the only government in our nation’s history to reduce Canada’s greenhouse-gas emissions.”—Joe Oliver, finance minister (7/10)

Analysis: To be clear, the government had little, if anything, to do with these reductions. And Canada continues to be viewed around the world as an environmental villain. But Joe says you owe us a solid, polar bears.

Claim: “In the almost 150 years since Confederation, no other federal government has taken more legislative and other action to address the safety of Canadians in our community, none has cared as much about the protection of our children or about victims of crime.”—PM Harper (9/10)

Analysis: Under Harper, it’s never enough to say government is doing something. It has to be doing the most something ever because previous governments did the least something ever. Harper is basically saying: “Until I came along, our country was a Mad Max-style wasteland in which murderers roamed free, kidnappers earned Air Miles on a per-abduction basis and the justice minister habitually kicked the victims of crime in the shins, often while pointing and laughing. By way of conclusion, I shall now list alphabetically the previous Prime Ministers and the percentage by which they cared less about protecting children than I do. Abbott: 76 per cent. Bennett: 84 per cent…”

Claim: “No federal budget has ever done more for the environment.”—Leona Aglukkaq, environment minister (11/10)

Analysis: This game-changing statement opens new frontiers in the realm of exaggeration.

Politicians have always believed that outlandish embellishment can be applied only in areas where at least some minimal progress has been made. The Conservatives are changing that. In his budget speech, Joe Oliver bragged that the Harper government paid down $37 billion in debt—when in fact it has presided over a debt increase of more than $150 billion. Later, the environment minister affixed a ‘greenest budget ever’ label to a document that utterly ignores climate change. Turns out you can use hyperbole to exaggerate something you didn’t even do.

Aglukkaq instantly becomes the Conservative to watch during the coming campaign. What new feats of hyperbole will she attempt? Given a few more months to hone her skill, she may very well become the first politician to take credit for progress being made in parallel universes. Mr. Speaker, I am happy to report that in 68 per cent of alternative timelines, Canada still has a functioning ecosystem, including the one where Riker is captain!

The safe bet is that she and her colleagues will say just about anything to get re-elected. And that’s no exaggeration.