While working the frontlines as a med student, Wickenheiser saw COVID's impact with her own eyes. She volunteered to secure badly needed PPE, and then advocated for fellow athletes. 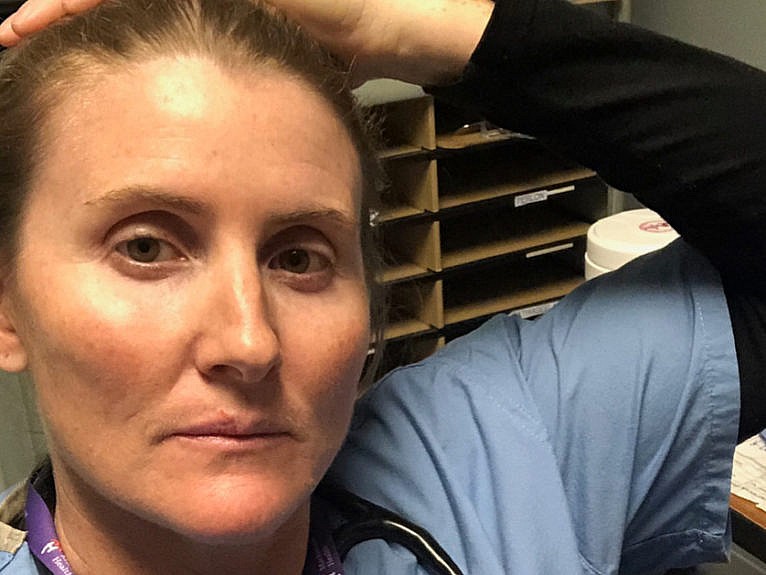 For the last three years, hockey legend Hayley Wickenheiser has traded in her skates for a stethoscope. As a medical student at the University of Calgary, she isn’t permitted to treat COVID-19 patients. “That’s in theory,” she says. Just a few days ago, during her family medicine rotation, she gave a head, neck and throat exam to an elderly man who she later learned had been positive for the virus at the time. “It’s absolutely unavoidable in this pandemic.”

After the incident, she joked with her attending physician: “Good thing we took our PPE super seriously—because that’s what’s saving us.” It also reinforces why she and other volunteers did a drive for personal protective equipment in April 2020. Wickenheiser posted a tweet to her tens of thousands of followers asking for masks, gloves and chemo gowns, which ultimately led to the donation drive after being amplified by fellow high-profile Canadian Ryan Reynolds. She joined forces with Conquer COVID-19, a volunteer-led organization that collected three million pieces of PPE for vulnerable frontline workers before ending its operations in September 2020.

Wickenheiser was thrown into the deep end late last February when she was doing her clerkship, as part of her medical training, at an emergency department in a Greater Toronto Area (GTA) hospital. She saw a young man get diagnosed with COVID. “Seeing this young, otherwise healthy patient tank before my eyes,” she says, “it hit home pretty well.”

A week after that, she was pulled out of the rotation because of PPE shortage worries. She asked a friend who had run a major GTA hospital during SARS if this crisis was going to be as bad; they said it was going to be much worse. “I could sense from their tone that this is unlike anything we’ve ever experienced in our lifetime,” she says, which prompted her to send the tweet that started it all.

Skating between the realms of professional sports and health care, even before her PPE drive, Wickenheiser managed to use her profile to make changes. In March 2020, she spoke out about the International Olympics Committee’s decision to continue the Olympics. “This crisis is bigger than even the Olympics,” she said via Twitter, adding that moving ahead would be “insensitive and irresponsible given the state of humanity.” It snowballed into Team Canada withdrawing from the Games, eventually triggering their postponement entirely.

“It’s a very tenuous situation,” she says a year later of the 2021 Tokyo Games. The return of the NHL, she says, was almost “a necessity for health, for hope and for people’s enjoyment.” The Olympics could serve a similar purpose. “It can show the good in humanity in spite of a terrible time, but it can’t be at the expense of health.”

Athletes are one of the most resilient populations that exist, she says. If anyone can be a model on how to overcome challenges—like a global pandemic—it’s them. Her hope is that, if the Games go forward, the stories that emerge will lift people up when they really need it. “I’m still a bit of an idealist,” she adds. “That’s what keeps me believing in the Olympics.”