“He felt it was the humane thing to do” 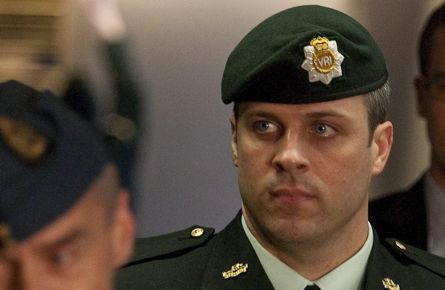 Capt. Robert Semrau fired two bullets into the chest of a severely wounded Taliban fighter because he “couldn’t live with himself” if he left another human being “to suffer like that,” a fellow soldier testified today. “He said it was a mercy kill,” said Cpl. Steven Fournier, the only Canadian who was with Semrau at the time of the alleged shooting. “He said he felt it was necessary. He felt it was the humane thing to do.”

A key witness for the prosecution, Fournier provided a damning account of what he claims unfolded on the morning of Oct. 19, 2008, when he and Semrau stumbled upon an injured insurgent who, moments earlier, had been shot out of a tree by a U.S. Apache helicopter.

Both soldiers were part of a small Canadian team assigned to mentor a company of Afghan National Army (ANA) troops, who were conducting a “sweep and clear” patrol in a dangerous district of Helmand Province. When ANA members first discovered the maimed fighter—who had a gaping hole in his stomach and a mangled left leg—their commander, Capt. Shafiqullah, ordered them not to provide medical treatment. As Fournier quoted him saying: “If Allah wants him, he will die. If not, he will live.”

When a second casualty was discovered nearby (this one already dead) Fournier suggested that both men be photographed for intelligence purposes. Semrau agreed, and after snapping two pictures of the corpse and two pictures of the wounded man, Fournier turned off his camera and began to walk away. Seconds later, two shots rang out, and he swung around to see Capt. Semrau standing over the wounded insurgent, his C-8 rifle still aimed at the man’s heart.

“He told me: ‘It’s OK, it was me,’” said Fournier, who assumed the gunfire was hostile. Semrau was calm, he said, and expressed surprise that his bullets had pierced all the way through the man’s body and ricocheted off the ground. “He said he did not expect his two rounds to go through him like that,” Fournier said.

On the witness stand Wednesday for the third straight day, Fournier described how his mind raced in the minutes after the shooting. “What just happened? None of it made sense to me. I was still just shocked at this point.” As both men left the scene, accompanied by an Afghan interpreter nicknamed “Max,” Fournier said Semrau offered an explanation for his actions. “He couldn’t live with himself if he left a wounded insurgent, a wounded human, to suffer like that,” he testified. “He said he was willing to accept whatever fallout there was on it, and that it was a mercy kill.”
Both the Geneva Conventions and the Canadian Forces Code of Conduct compel our troops to provide First Aid to all casualties, friend or foe. As in the civilian world, mercy killing on the battlefield is strictly forbidden, regardless of the circumstances.

After returning to the ANA position, Fournier said Semrau was confronted by Capt. Shafiqullah, who heard the rifle and was upset that his Canadian counterpart ignored his command. “He said he didn’t want anything done with this person,” Fournier said. “He turned around and walked away from Capt. Semrau. He was angry with us.” Fournier said he and Semrau also had a brief meeting with the other members of their four-man team, Warrant Officer Merlin Longaphie and Cpl. Tony Haraszta. “He told us that he fired the shots, that it was necessary, that he couldn’t live with himself if he left someone in that condition,” Fournier testified. “He said he hoped that anyone else would do the same thing, even to himself.”

Semrau, 36, faces four charges, including second-degree murder, for the alleged battlefield execution. A Moose Jaw native with two young daughters, he is the first Canadian soldier ever accused of homicide on the front lines of a war, and if convicted, the mandatory sentence is life behind bars with no chance of parole for ten years. He has pleaded not guilty.

The unprecedented court-martial has triggered a fierce debate—both in the ranks and out—about whether the reality of combat sometimes trumps the law of combat. However, Semrau himself has never admitted to shooting the man, and not once have his lawyers suggested that he killed out of compassion. “The prosecution’s theory may turn out to be wishful thinking at the end of the day,” said Maj. Steve Turner, Semrau’s lead lawyer. “We are confident in our case and it’s going to play out the way it plays out.”

A member of the 1st Battalion of the Royal Canadian Regiment, Fournier said he was rattled by what happened and considered it a “significant” event, but did not report it to his superiors. Still a private at the time, Fournier said he held out hope that a more senior soldier—Warrant Longaphie, perhaps, or Cpl. Haraszta—would come forward with the allegations. “I didn’t know what to really do,” he said. “I wanted to focus on my work and hope that it came out somehow.”

It eventually did come out two months later, when an Afghan soldier approached Semrau’s commanding officer, Maj. Steven Nolan, with a cryptic allegation: “Captain Rob no good,” he said. “Captain Rob boom boom Taliban.” Suspicious, Nolan ordered his sergeant-major, David Fisher, to question Fournier about what he saw that morning. “He told me to tell him, with no lies, exactly what happened on the 19th of October,” Fournier said. “I was quite relieved. It didn’t force me to be the snitch. People would not see me as the guy who came forward to ‘rat out’ a captain.”
Hours later, Fournier received a telephone call from Chief Warrant Officer Bernard Caron, a member of the Canadian Forces National Investigation Service. He told Caron what he saw, what Semrau said, and agreed to accompany a unit of military police officers back to the scene of the alleged crime. The man’s body was never found, but investigators did recover two 5.56 mm shell casings and two bullets that were later matched, through ballistics tests, to Semrau’s C-8.

Late in the afternoon, Semrau’s lawyer began what is expected to be a lengthy cross-examination of the Crown’s star witness.

“You would agree the body was beyond saving, even with bandages,” Turner asked Fournier.

“I assumed that, yes sir,” he answered.