'He was a good kid:' Father of La Loche victim prepares his son's grave

As he heats the cold earth where his son will be buried, Gerald Moise remembers Dayne Fontaine as a teen who liked to be outdoors in La Loche 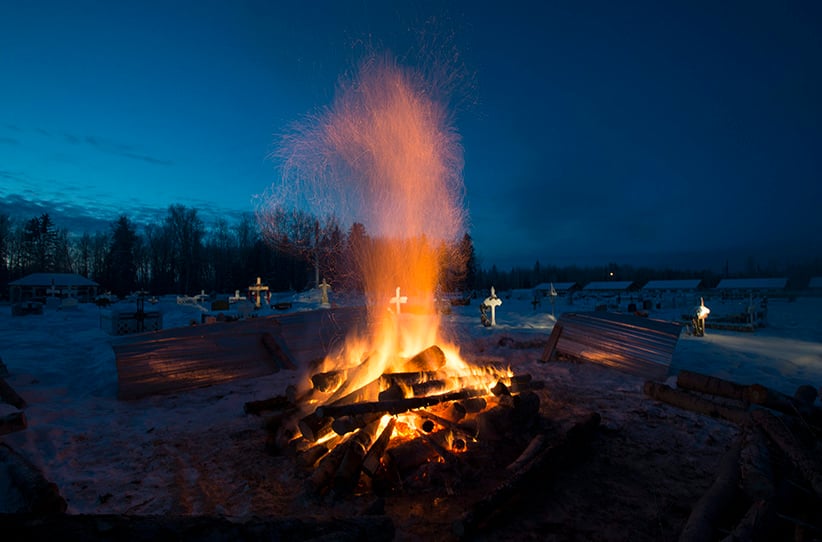 A fire burns as it thaws the frozen ground in order to dig a grave for one of the shooting victims at the cemetery in La Loche, Saskatchewan, Monday, Jan. 25, 2016. A 17-year-old was charged with first-degree murder and attempted murder in a mass shooting at a school and home in the remote aboriginal community in western Canada on Friday, officials said. (Jonathan Hayward/CP)

LA LOCHE, Sask. – The father of one of the victims in a northern Saskatchewan shooting burned logs at the community cemetery Monday to thaw the ground where his son will be buried.

“He was a good kid,” Gerald Moise said as he poured gasoline to ignite a fire that will burn for three days over the grave site.

He remembered his son, Dayne Fontaine, as a 17-year-old who liked to be outdoors in the remote community of La Loche that sits on the edge of a lake and in the heart of the boreal forest.

“He always (went) up north with grandparents hunting and he liked quadding.”

Dayne and his 13-year-old brother, Drayden Fontaine, were found dead in a home on Friday. A teacher and an aide were shot and killed shortly after at the high school. Seven other people were wounded.

Moise, who is not Drayden’s father, said losing his boy is especially hard as it comes on top of other losses.

He said he’s trying to stay strong for the sake of his two other children.

A teen charged in the shooting stared at the floor for much of his first court appearance Monday.

The tall, thin 17-year-old, wearing an orange jumpsuit, his legs and hands shackled, was brought into a packed courtroom in Meadow Lake — a community about 350 kilometres south of La Loche.

He spoke in a soft voice as he was asked whether he understood he is not to contact anyone involved.

“There’s to be no phone calls, no letters, no getting messages to any of these people or their families,” said Judge Janet McIvor.

The teen, who can’t be named under the Youth Criminal Justice Act, is to be held in custody until his next court appearance Feb. 22.

He faces four counts of first-degree murder and seven counts of attempted murder.

McIvor placed a publication ban on the names of the injured.

In La Loche, the school’s fate was already being debated after calls from the acting mayor and others that it be torn down and rebuilt. Schools with a similarly tragic history in the United States have been razed at the request of the community.

Donna Johnson with the Saskatchewan Ministry of Education said no decision had been made and the wishes of residents will be considered.

“We’ll work with them together to determine what plan will go forward to ensure there is a school facility that meets the community’s needs,” she said in a teleconference from Regina.

The school was built in 1974 and underwent extensive renovations in 2006.

Both the high school and the nearby elementary building are closed indefinitely. The grade school is being used as a crisis response centre.

Leonard Montgrand, executive director of the La Loche Friendship Centre, said he doesn’t think the school needs to be torn down.

“It’s not where it happened that’s the underlying root of all this,” said Montgrand, who runs youth intervention and family programs. “It’s why it happened — and it could have happened anywhere.”

Montgrand’s son was in the school during the shooting.

Montgrand suggested that perhaps the answer should be left to students.

“Some of the young people have said to me that by tearing it down, are we getting rid of everything that happened? Are we not going to learn anything from this?”

Tashina Montgrand went to the school last year. She said she doesn’t think destroying the building would help.

“It’s not going to go away for the students here and they’ll still remember about it.”

She said she hopes the shooting doesn’t scare teachers away from the community.

“We need them for our students.”

Bob Merasty with the Federation of Saskatchewan Indian Nations was in court in Meadow Lake and said the shooting underscores larger problems with youth on First Nations reserves.

“This is a young man who is perhaps a victim himself of circumstances,” Merasty said.

— With files from Dean Bennett in Meadow Lake and Chinta Puxley in Winnipeg.