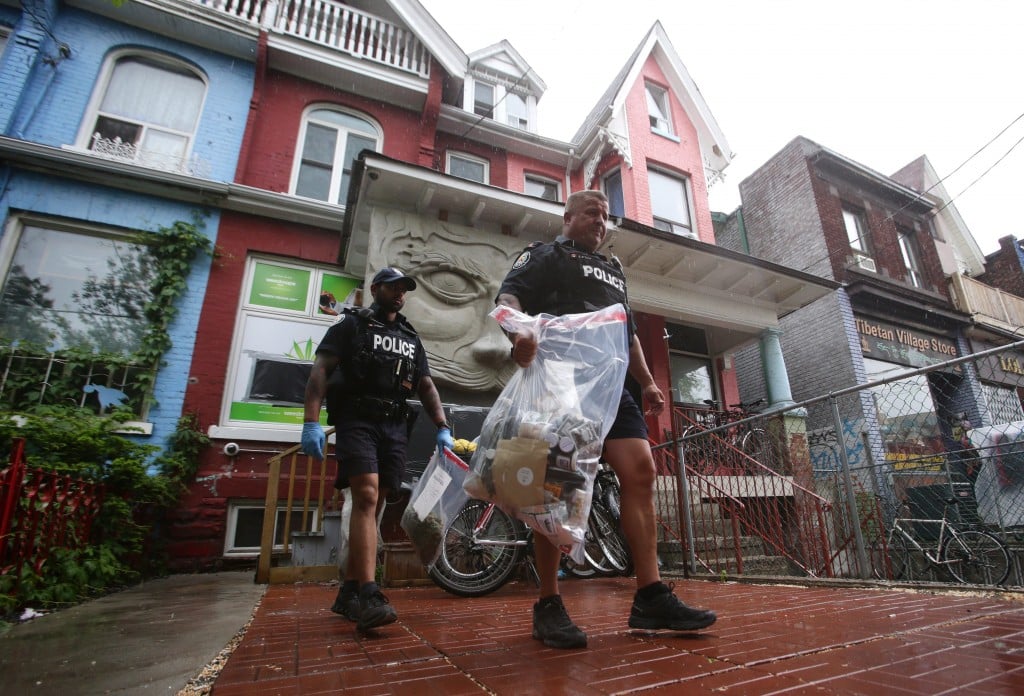 TORONTO – “Genuine” health concerns and “significant” community complaints prompted a string of police raids on unregulated marijuana dispensaries across Toronto, the city’s police chief explained Friday after being criticized by a number of residents for the action.

Police Chief Mark Saunders emphasized that the operation – dubbed Project Claudia – would not prevent anyone with a prescription for medical marijuana from accessing the drug.

“I want to be very clear about our intentions,” Saunders said Friday at a press conference which drew a mix of journalists and marijuana activists.

“Project Claudia is not an attack on the lawful production, distribution or purchasing of marijuana for medical purposes. It’s the health concern. It is a genuine heath concern, because there is no regulatory process behind.”

The operation angered some Torontonians, who took to social media to denounce it as a waste of time and police resources.

Others also questioned the timing of the move just months after the federal government announced it will introduce legislation to legalize and regulate marijuana next spring.

But Saunders fended off the criticism even as his news conference was frequently interrupted by angry pot activists and a protest against Project Claudia took place outside police headquarters.

Since March, he said, the number of marijuana dispensaries has doubled in the city _ with half of the facilities investigated by police located within 300 metres of schools.

After consulting municipal officials and the public prosecution service of Canada, Saunders said he had to make the “hard decision” to clamp down on the proliferation of pot shops.

“Once I had a full understanding of what the health concerns were, that was when I decided to take the action,” he said. “This is about public safety.”

Search warrants were carried out on 43 locations by police who were accompanied by city municipal licensing and standards officials, Saunders said.

The action resulted in 90 people being arrested and a slew of charges laid – 71 criminal charges and 186 under the Controlled Drugs and Substances Act.

About 270 kilograms of dried cannabis as well as hundreds of kilograms of pot-laced food products such as chocolate, brownies and candies were seized during the raid.

“These locations have a broader impact on the surrounding neighbourhoods. There is no quality control whatsoever on these products,” Saunders said as dozens of bags of seized goods were laid out before him. “They are marketed in a way to disguise the unknown and unregulated amount of THC in the products.”

All the dispensaries targeted had been under investigation for weeks, and had been issued letters on May 18 warning them they were engaged in unlawful activities and that action would be taken if they didn’t stop.

Only one pot shop shut down as a result of the warning letters, Saunders said.

“These locations cannot tell you where it’s coming from nor what its contents is,” he said. “You don’t even know who you’re purchasing off. Out of the arrests that we made, two people were wanted.”

Many marijuana activists, however, disagreed with Saunders’ reasoning.

“These dispensaries do no harm. The only harm being done in association with these dispensaries is the harm of patients being made to suffer and the harm of peaceful citizens being given criminal records,” said Jodie Emery, wife of Marc Emery, Canada’s self-proclaimed “Prince of Pot” who served five years in a U.S. prison for selling marijuana seeds from Canada to American customers.

“Doctors in this country are not providing access and that’s why dispensaries have become so popular, because the people demand it.”

Justin Trudeau’s Liberal government has said a legal marijuana regime will keep pot out of the hands of children and deny criminals the profits of illicit dealing.