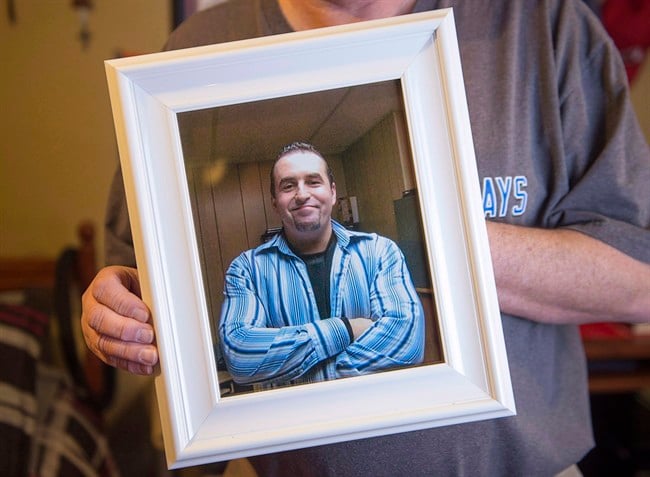 Ernie LeBlanc hold a photo of his son Jason LeBlanc at their home in Sydney Mines, N.s. on Monday, March 14, 2016. A police report says a man who died from a drug overdose in a Cape Breton jail told a prison nurse he had taken five “nerve pill(s)” and appeared intoxicated, raising questions for an addictions expert about why he wasn’t sent to hospital rather than a prison cell. (Andrew Vaughan/CP)

A police report says a man who died from a drug overdose in a Cape Breton jail told a prison nurse he had taken five “nerve pill(s)” and appeared intoxicated, raising questions for an addictions expert about why he wasn’t sent to hospital rather than a prison cell.

According to the report obtained by The Canadian Press, a prison nurse who assessed Jason Marcel LeBlanc at the Cape Breton Correctional Facility told a guard that he found the prisoner “appeared to be intoxicated by something” and had “slurred speech and (was) lethargic.”

“If these circumstances occurred even in a regular hospital bed, the patient would need to be transferred to a monitored setting … where resuscitative measures could be implemented and the patient closely monitored,” said Dr. Evan Wood, an addictions medicine physician at St. Paul’s Hospital in Vancouver and a professor at the University of British Columbia.

The police document says in a second check on the afternoon of Jan. 30, the nurse found the prisoner’s vital signs had improved and the investigators say the nurse told a guard he didn’t have any concerns “at this time.”

An autopsy report says when LeBlanc returned to his cell after the assessment he had a concealed bag full of pills and near-fatal levels of methadone in his blood.

That autopsy concluded the 42-year-old labourer died 13 hours after admission from the combination of methadone and bromezapan, an anti-anxiety drug he swallowed while in the cell. There was no confirmation of the presence of Lyrica in the autopsy’s blood or urine screens.

The Nova Scotia Health Authority, which runs prison health care in the province, declined to comment on the police report or answer questions about the health care provided to the prisoner.

He noted that Lyrica is an anti-epileptic prescription drug usually used to treat epilepsy, but it also is sold on the street. He said it can cause slurred speech and drowsiness in the case of an overdose.

He said symptoms like those described in the police report warrant a call to a poison control centre and he believes that such a centre would recommend taking the individual to an acute care setting.

“Lethargy and slurred speech would set off major alarm bells under any circumstances and … would warrant both a call to poison control and moving the individual to an environment where an overdose can be safely managed,” he wrote in an email.

A Justice Department review of the case has already stated that correctional staff did not follow all steps in the strip search process, and they failed to complete their rounds at standard intervals.

As well, the department concluded corrections staff did not get a required health transfer form describing LeBlanc’s medical history or an explanation for why escorting officers didn’t have one.

However, the report also said that the Nova Scotia Health Authority — which operates health care in Nova Scotia’s prisons — didn’t participate in the review because the Personal Health Information Act “prevented health care staff participation in the investigation or access to health records by Correctional Services.”

Health authority spokeswoman Cindy Bayers said legislation prohibits talking about the case. “We are, however, available to speak with appropriate family members,” she added.

Jason’s father Ernie LeBlanc said in an interview Tuesday he hasn’t been in touch with the Nova Scotia Health Authority, but he would like to see a copy of any review done into his son’s death, not just chat with officials.

“I think they should have participated. My son ended up dying and we really don’t know what they did or didn’t do,” he said. “Health care should have gotten Jason to a hospital.”

The Justice Department report has said that LeBlanc appeared to have smuggled the pills into the jail, and said he was seen by health care staff at 3:43 p.m. and again at 6:33 p.m. before falling asleep at 7:44 p.m.

The original review also says health-care staff had little to say about the inmate’s condition to corrections officers who brought him for the two checks.

“No recommendation or advice was received from health care for special precautions, special watch of the offender or that the offender should be transported to the hospital,” the review says.

A surveillance video showed LeBlanc’s breathing started to slow at 1:50 a.m. on Jan. 31, and it took 45 minutes before corrections officers found him unresponsive in his cell. He was declared dead at 2:45 a.m.