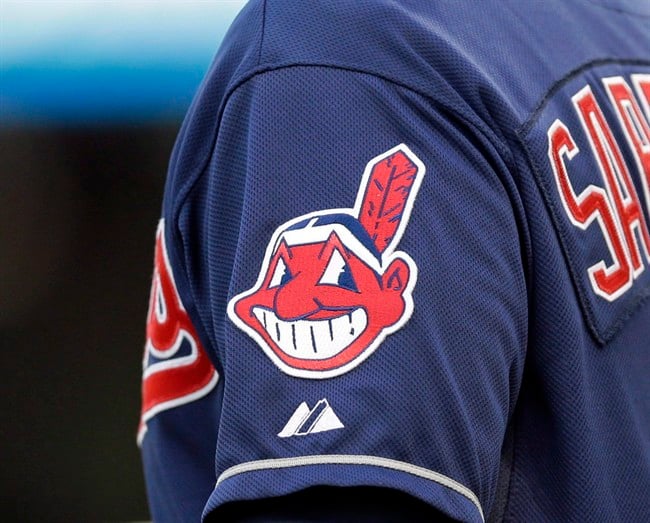 In this April 8, 2014 photo, the Cleveland Indians Chief Wahoo logo is shown on the uniform sleeve of third base coach Mike Sarbaugh during a baseball game against the San Diego Padres in Cleveland, Ohio. (Mark Duncan/CP)

TORONTO – Mere hours before the Toronto Blue Jays were set to play the Cleveland Indians on home turf, lawyers for an Ontario activist urged a Toronto judge to stop the U.S. team from using its full name and logo in the province.

The legal challenge came from architect and indigenous activist Douglas Cardinal, who has also filed complaints to the Human Rights Tribunal of Ontario and Canadian Human Rights Commission.

Monique Jilesen, a lawyer for Cardinal, told an Ontario Superior Court judge that the combination of the Cleveland team’s name and logo — which she called a caricature of an indigenous person — is racial discrimination.

She said the use of a racially discriminatory caricature and name is a violation of the Ontario Human Rights Code and Canada’s Human Rights Act.

“Someone like Mr. Cardinal ought to be able to watch the game, like every other person in Canada, without suffering from racial discrimination,” she said, noting that the urgency of the legal application was due to the number of fans that were expected to tune into the game in Toronto on Monday night.

“It is the size and scope of the platform that calls out for injunctive relief.”

When asked by the presiding judge what a game between the Jays and Cleveland would look like if the injunction was granted, Jilesen said the team had spring training jerseys which did not have the “offending” team logo and name.

She also said Rogers could direct its sportscasters not to use the Cleveland team’s full name during broadcast of the game, and refrain from showing the team’s logo during broadcasts and on the Jumbotron at the Rogers Centre in downtown Toronto.

She added that Major League Baseball, to comply with an injunction if one was issued, would be ordered to allow the Cleveland team and Rogers to take those measures.

Jilesen noted that the legal action is not seeking to cancel the game or its broadcast, nor is it seeking to stop fans from using the team name or logo.

“The game can go ahead, the team can play, there would be no loss of enjoyment for any viewers,” she said. “And indigenous people can watch, at a minimum, with a reduced amount of discriminatory iconography.”

The Cleveland team’s logo, called Chief Wahoo, is a broadly smiling cartoon man with red skin and a feather in his headband.

“It cannot be described as anything other than a racist caricature,” said Jilesen.

But a lawyer for Rogers said that Cardinal is currently in China, where Rogers does not broadcast.

“Mr. Cardinal won’t even be here to watch the game that he complains about,” he said.

The lawyer also said that Cardinal’s legal application, which was filed on Friday, initially suggested that all use of the Cleveland team’s name and logo — including by fans in the stands — ought to be banned, but that isn’t the case.

“Mr. Cardinal…ought to have known the case he actually wanted the court to deal with,” he said.

“The result of this would be an injunction that would have such a minimal impact that it wouldn’t come remotely close to satisfying the concerns Mr. Cardinal has in this case.”

He also noted that an injunction would only prevent Rogers from broadcasting the team’s name and logo, while its competitors would still be able to continue using them.

A representative from the Cleveland Indians has said the team was “aware of the situation” but declined to say anything else.

Cleveland is leading Toronto in the playoff series 2-0.