Interim leader named in the wake of the departure of nine Wildrose members to the governing PCs, including ex-leader Danielle Smith 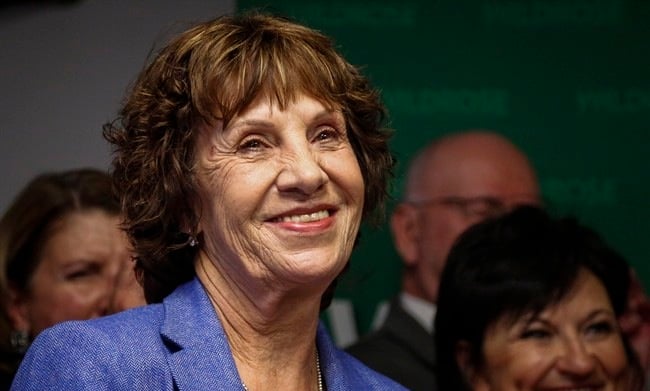 Heather Forsyth smiles at a news conference after being named the new interim leader of the Wildrose party in Calgary, Alta. (Jeff McIntosh/The Canadian Press)

CALGARY – Alberta’s Wildrose party has named an interim leader after Danielle Smith and eight other caucus members bolted to the governing Progressive Conservatives.

Heather Forsyth is one of the five remaining Wildrose caucus members in the legislature.

Forsyth, a former solicitor general who crossed the floor to the Wildrose from the PCs in 2010, will lead the party until a permanent replacement is chosen.

Related:
Behind the uproar in Alberta
Maclean’s politics podcast On the Hill: On the floor-crossings in Alberta

“This is a pivotal moment for Alberta. In the pursuit of power, democracy has been swept aside,” Forsyth said in a speech to chanting supporters at the party headquarters in Calgary Monday.

“There is no doubt an overwhelming number of Albertans feel hurt — who feel that the most noble notion of public life has been shattered. Folks, let there be no questions, Albertans did not lose their Opposition.”

Last week Smith resigned as Wildrose leader and crossed the floor with eight others to join Premier Jim Prentice. The move was pitched as a reunification of Alberta’s right, with the defectors saying they are ideologically sympatico with Prentice.

Forsyth said she and her fellow caucus members will focus on doing a better job for the 440,000 Albertans who voted Wildrose in the last election and for everyone who expects the best from their politicians.

Earlier this year Forsyth indicated she would not run again due to family reasons. She said she now plans to stick around until at least the next election call expected in 2016.

With the defections, the Tories hold 72 of 87 legislature seats.

It remains to be seen if Wildrose will still be the Official Opposition as the Alberta Liberals also have five seats in the legislature. The NDP holds four seats and there is one Independent.

Both the Liberals and Wildrose have sent the Speaker letters asking for the role. The Wildrose said it believes it has precedence on its side to keep its status.

Members of the party are still angry about the departure of Smith and their colleagues.

“The other day nine of my colleagues grabbed each others hands and jumped off a cliff,” said Livingstone-Macleod member Pat Stier.

“It’s been a difficult week I can tell you, but our group here are dedicated even more now. We’re strong, we’re alive and we’re going to keep holding this government to account.”

Choosing the new leader won’t happen until next March at the earliest.

“We have to be prepared for an early election.”

Callaway said it’s too early to say if there will be a leadership convention or if it can be done through a phone-in ballot.

Outgoing federal Conservative MP Rob Anders was on hand for the announcement of the interim leader. He said he was there to renew his Wildrose membership card.

He said he isn’t considering a run at the leadership, at least for now.

“I’m not. I have no inclination at this stage.”