'Blame John Horgan' might look good on a billboard, but it doesn't save money at the pump 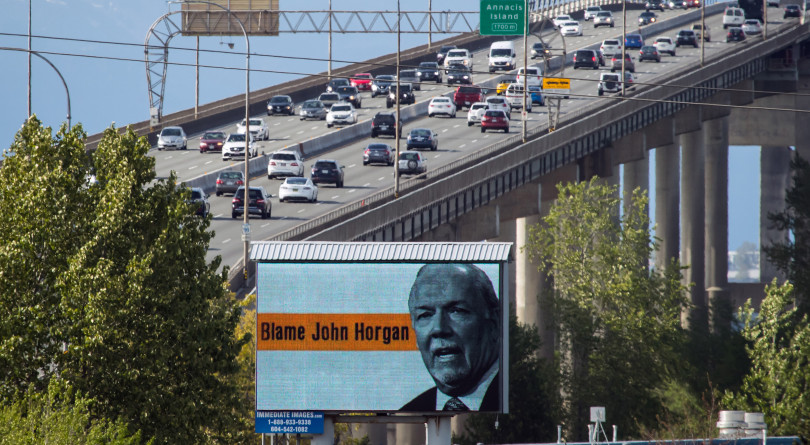 An electronic billboard by the Alex Fraser Bridge, paid for by the B.C. Liberal caucus (Darryl Dyck/CP)

This April, when B.C. gas prices hit an all-time high, Travis McKeown ran the numbers, took a deep breath and put his money down on a Chevrolet Bolt, an unassuming sedan that runs entirely on electricity. The price—$52,000 before taxes or rebates—did not bring him joy. Neither does his new car, particularly. “It doesn’t feel like a $50,000 BMW.” But McKeown, who lives in Surrey and commutes daily to his IT job in Richmond, logs up to 24,000 km a year. His 2007 Honda Civic Si was nearing replacement age and sucked up premium gas which now retails for about $2 per litre. Each fill was costing McKeown about $70, and at that price, he reckoned an electric car might save him money in the long run. Federal and provincial rebatesand incentive programs reduced his grand total to $44,000 and if gas prices stay the same or go higher, McKeown calculated his purchase will start to pay off in four or five years.

Across B.C.’s Lower Mainland, where gas prices are the highest in Canada, residents are shifting their transportation habits. Chat sites are filled with tips on “hypermiling,” slow and steady driving techniques which improve fuel efficiency. Electric car and bike sales are up, transit ridership too and some who have to travel by car routinely cross the U.S. border to fill their near-empty tanks at lower prices. Some fill jerry cans as well, for extra savings. There is even a new app called “Worth The Drive” to determine whether the trip is worthwhile. Users plug in their local gas price, the roundtrip distance to the border, their vehicle’s mileage and tank size, and the app does the rest. Its developer, Gilson Tsang, is a philosophy major who dabbles in writing software and lives in Coquitlam, 40 km from the border. The idea came to him after months of doing his own calculations by hand. “I thought this isn’t good, every time I want to calculate it takes me five or 10 minutes to do it,” he says. “So why not make it more automated, throw in some data and get the output?”

RELATED: Alberta’s election, and the ugly politics in store for Canada

For commuters with no option but to stick with vehicles they already own, the price spike hurts, which has Premier John Horgan’s opponents capitalizing on the discontent. The provincial Liberal opposition has launched a publicity campaign blaming Horgan for high gas prices; key commuter ridings are being papered with flyers, ads are popping up on social media and digital billboards featuring a huge photo of the premier are up at key bridge and tunnel entrances. The signs urge motorists to, “Blame John Horgan” for the high prices, though experts say they are caused in large part by B.C.’s lack of refining capacity and market forces outside Horgan’s control.

Still, Horgan’s alliance with the fossil-fuel hating Green Party, his stand against the Trans Mountain pipeline and his ongoing feud with Alberta make him a target for claims he’s at fault. The NDP is vulnerable in some commuting suburbs, like Surrey and Maple Ridge, swing ridings where itwon by narrow margins, says Hamish Telford, a University of the Fraser Valley political science professor. “This might just be one issue that flips them back to the Liberals, depending on when the election is and what gas prices are at that time.”

Next door in Alberta, which supplies more than 80 per cent of B.C.’s fuel, Premier Jason Kenney is doing his best to stoke fear and anger among B.C. voters. His first move as premier was to proclaim a law enabling Alberta to cut oil shipments to the province. He threatened to follow through if British Columbians don’t pressure Horgan to get on board with the pipeline project. On this issue Horgan can’t make peace, even if he wantsto: his government relies on votes from B.C.’s three Green MLAs for whom pipeline opposition is paramount.

RELATED: Carbon tax ruling is a modest win for Trudeau—but after a string of losses, whatever works

But for many Lower Mainland residents who have grown accustomed to comparatively high gas prices—and even higher spikes in the spring—the finger-pointing doesn’t wash. “I certainly don’t blame the NDP for this. This has everything to do with the free market,” says Marcus Sabathil, a Maple-Ridge furniture maker who runs a van for his business.

Sabathil is an “ecomodder” a back-yard engineer who counters high fuel prices by modifying his vehicles to improve fuel efficiency. About nine years ago, when prices soared over $1 per litre, which seemed astronomical at the time, Sabathil bought a used hybrid car for trips that didn’t require much carrying capacity. He then eco-modified his van to improve fuel efficiency. He designed aerodynamic coverings called fairings for the vehicle, changed out the factory hubcaps for ones that were flat and blocked the grill as much as he could, depending on the weather. “There’s a lot you can do. I actually cut my fuel consumption almost in half.”

Recently, rising gas prices prompted Sabathil to go a step further. His wife commutes 45 km a day in a Prius hybrid and noticed her gas bills climbing from about $55 to $75 a week. So Sabathil modified her car, too, improving the mileage by 36 per cent. He recognizes his ecomodder hobby is unlikely to catch on with most people and says vehicle manufacturers should be forced to set lower consumption targets, or nothing will change. But the answer is certainly not another pipeline, he adds. “Gas prices will continue to rise regardless; we need to conserve.”