Hi sports fans, remember me? It's the Stanley Cup playoffs.

With no Canadian teams left and light on star power, a cooking show in Canada is drawing bigger numbers than this year's NHL playoffs 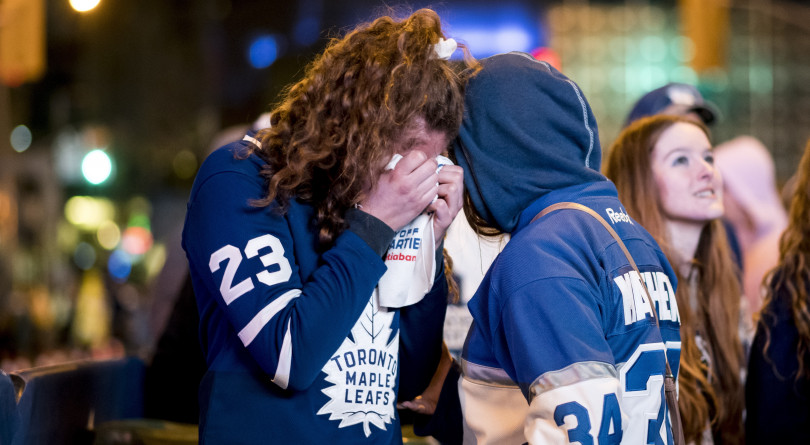 Fan react as the Toronto Maple Leafs are eliminated from the Stanley Cup playoffs in Toronto on Tuesday, April 23, 2019 (Christopher Katsarov/CP)

Ever since Bill Brioux’s beloved Toronto Maple Leafs were eliminated in the first round of the Stanley Cup playoffs, he’s been among the many Canadians searching for a rooting interest in this year’s hockey playoffs.

Fans of the Winnipeg Jets and Calgary Flames once believed their teams had legitimate hopes to lift the Stanley Cup, only to watch them lose in the first round too. Meanwhile, two of the sport’s all-time greatest players—Sidney Crosby and Alex Ovechkin—both lost their opening round series.

No Canadian team made it to the final eight. Connor McDavid, the sport’s best player, didn’t make the playoffs. Nor did Carey Price, the world’s best goalie. “What’s missing is Ovechkin and Crosby and all these Canadian teams’ stars,” says Brioux, a long-time Canadian TV columnist. “Without these marquee names, a lot of people have drifted off [from watching].”

In Round One, the Maple Leafs were regularly drawing well over two million viewers for their playoff games, Brioux says. “Now that they’re eliminated, there might not be an audience over two million all the way through the finals.” With the Cup now down to its final four teams—the Boston Bruins, St. Louis Blues, San Jose Sharks and … (checks Google) Carolina Hurricanes—this year’s NHL playoffs have certainly struggled to capture the attention of most Canadians.

And when culinary television is drawing more eyeballs than the Stanley Cup playoffs—in Canada no less—it raises the question: is this the most boring NHL playoffs ever?

Canadians are practically begging for the Stanley Cup champions to return north of the border—a drought that goes back to 1993 when the Montreal Canadiens rode 10 straight overtime victories with Hall of Famer Patrick Roy in net, besting Wayne Gretzky’s Los Angeles Kings in the finals.

But in the last five years—since Rogers inked its 12-year, $5.2-billion NHL rights deal—only twice has a Canadian team made it past the second round: the Ottawa Senators in 2017 and the Winnipeg Jets last year. And no Canadian team has reached the Stanley Cup finals since the Vancouver Canucks lost game seven in 2011.

“The country will get behind a winner, if we can get someone to the finals,” says Dave Korzinksi, a research associate with the Angus Reid Institute. “But what do you do with St. Louis versus San Jose?”

In short: “Jaden Schwartz versus Logan Couture” doesn’t garner the same kind of hype as “Crosby versus McDavid.”

Hockey fans who tune in will be quick to point out that the game on the ice is top quality—though lacking in star power. The games are fast and exciting—and plenty are going to overtime, Brioux says. But he also points back to the Blues versus Stars playoff series when the cameras made a habit of finding NHLers’ parents in the crowd. “When the camera started showing more and more of the goalie’s mom in the stands, you start to wonder if the product [on the ice] is lacking.”

Meanwhile, the NBA’s Toronto Raptors are in the midst of a deep playoff run—and giving sports fans great reason to switch the channel to basketball. “The Raptors are stealing away eyeballs,” Brioux says. “So is Game of Thrones.”

As for Mary’s Kitchen Crush, Brioux has still yet to watch the cooking show. But he’ll say this: he’s heard from others that it’s pretty good.

MORE ABOUT THE NHL: