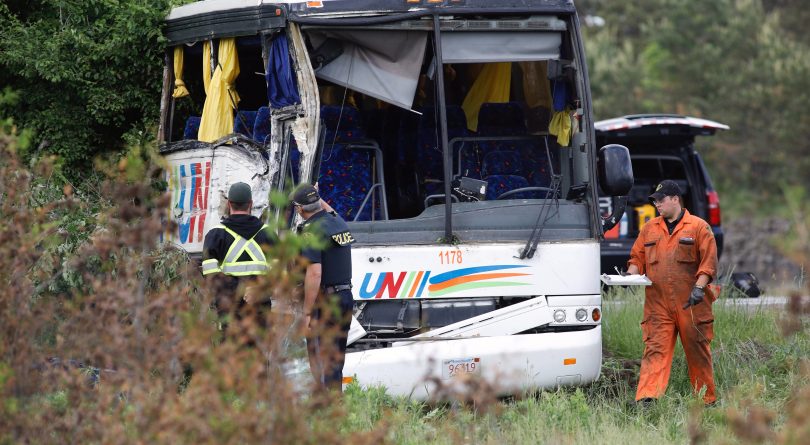 Two dozen people were hurt, four with life-threatening injuries, when a U.S. bus carrying tourists from China crashed on Highway 401 outside of Prescott, Ont. on Monday afternoon.

While the cause of the crash was still under investigation, she said the coach was the only vehicle involved. The bus hit a rock cut after it left the road, impacting the passenger side. Most of the windows as well as the front windscreen appeared to have been shattered and blown out.

Runciman, who had earlier in the day assisted with first aid efforts on the scene, described the ongoing investigation as “serious.” 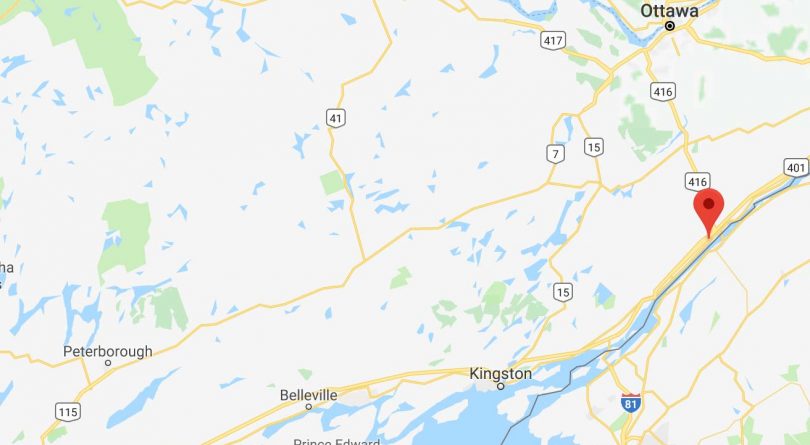 The first emergency calls about the crash came in at 2:45 p.m. ET.

Ornge, the health transport service, sent two helicopters, an airplane and an Ottawa-based ambulance to the scene, according to Ornge spokesman Joshua McNamara.

At one point during the day the Leeds Grenville Paramedic Service tweeted: “Multiple patients without vitals signs.” The tweet added that patients had been sent to Brockville General Hospital, which “declared a code orange,” as well as Kemptville Hospital, and Queensway-Carleton Hospital and Ottawa Civic Hospital in the nation’s capital. Another tweet said 20 patients were taken to Kemptville.

The bus was carrying tourists from China on a more than week-long journey.

On Monday evening the Chinese Embassy in Ottawa released a statement on Twitter saying it was closely following the accident “and very much concerned about the conditions of the injured passengers.”

About the bus crash near Prescott Ont. this afternoon, the Chinese Embassy and Consulate General in Toronto are following closely this accident and very much concerned about the conditions of the injured passengers. We are contacting the Canadian side for more information.

Aidan Liang, the manager at operator Massachusetts-based Union Tour Express said the group was midway through a regularly scheduled route that began in Washington, D.C. The trip, which was set to include a stop in Toronto, was meant to end on Friday. The Massachusetts based company caters mostly to Chinese visitors during the summer tourist season. Liang said he had not been in touch with the travellers families, or with local authorities in Ontario.

The CBC reported the driver of the bus had one year experience with driving busses.

The Federal Motor Carrier Safety Administration’s most recent data reported no crashes involving Union Tour Express vehicles in the past two years, but a March 18 inspection of a bus with the same licence plate as the vehicle that crashed on the 401 reported “No Or Defective Bus Emergency Exits.”

A truck driver who passed by shortly after the crash said he could see passengers standing outside the bus holding bloody noses and some appeared to have facial injuries.

“It definitely looked very surreal and chaotic,” said the man who would only give his name as Robert. “OPP officers were assisting those who could get off the bus and to waiting ambulances. You could definitely see heavy damage to the front of the bus including the passenger side of the front window.”

Residents in the area say accidents are common along this particular stretch of the 401.

Christy McLaughlin, who moved into the neighbourhood last August, was not home when the accident occurred. “There’s been a few lately,” she said. It’s not a tricky stretch of road to navigate, but there’s a lot of traffic, particularly tractor trailers and commuters headed to Ottawa or Brockville, Ont. “The roads are pretty straight, so I think it’s just congestion maybe.” 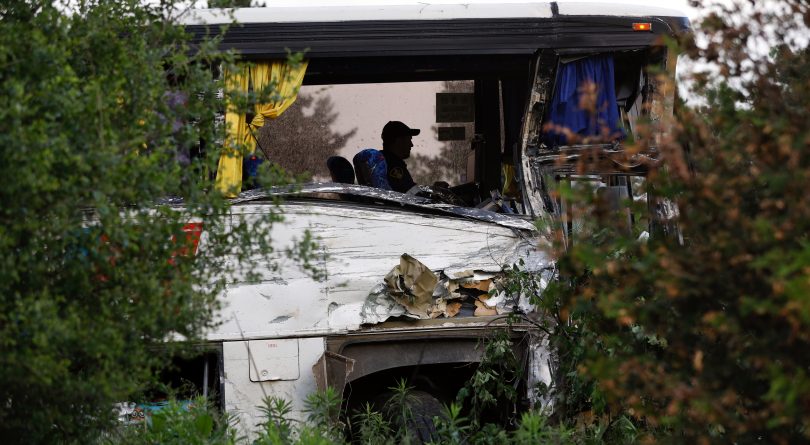 Darcy Gleeson, who’s been here a decade, says politicians regularly propose widening the road from four to six lanes as a solution to the frequent accidents. But that won’t fix the fundamental problem: distracted driving. “We’ve also noticed a pretty serious degradation in the quality of truck driving as well.”

A semi took out the guardrail in front of the house on a winter morning around 4 am. “He had drifted off the road.” When accidents happen on the highway, traffic is often diverted onto the side street that the Gleeson’s house is on. “What ends up happening is you get 53-foot trailers coming onto this road.” Gleeson’s son Flint says that lead to situations where there was “a bus going one way, transports going the other,” on a two-lane rural road. 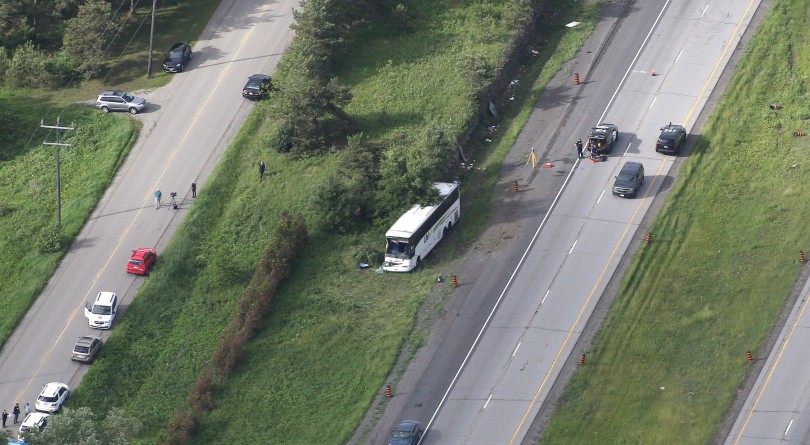 A bus sits on the side of highway 401 after crashing into a rock cut in Prescott, Ont., on Monday, June 4, 2018. THE CANADIAN PRESS/Lars Hagberg

On Monday the Brockville General Hospital said it had received five patients who all required critical care. Spokeswoman Abby McIntyre said one patient had to be sent to a hospital in Kingston, Ont., by air ambulance.

McIntyre said others injured in the crash are believed to be “walking wounded” who’ve been taken to other hospitals.

“Our teams are working hard with the folks that we’ve received and there’s all hands on deck for the moment,” she said.

The Ottawa Hospital said on Twitter that it was working with regional hospitals and Ornge to treat the seriously injured who required transport to Ottawa.

Back at the scene of the crash, crews worked into the evening to clear the area.

A green suitcase with orange edges sat in the cargo bay, the door seemingly torn off in the initial crash. A few feet above, yellow curtains, knotted up for a summer day punctuated the frames of the missing windows.

A tow truck lined up to pull the coach out of the ditch in which it had come to rest. The crowd of police officers and other first responders had disappeared, with just a few remaining for the removal.

—with files from The Canadian Press