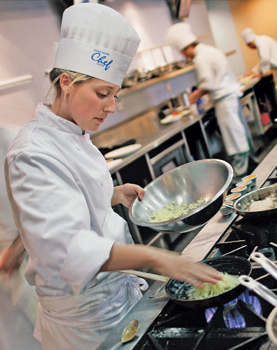 Ian Collins was almost a cliché. He finished a degree in visual arts at the University of Western Ontario and then spent four years waiting tables. “I was going in for job interviews, but I wouldn’t get the job,” explains the Toronto resident. The deal breaker? “It was always because someone else had real-world experience.” So Collins decided to enrol in a one-year diploma in sport and event marketing at George Brown College because, he says, it had a built-in internship. That led to a job after graduation, and now he’s an account executive at the marketing firm Zoom Media. At 31, Collins has his career on track. “College helped me by getting my foot in the door,” he says.

It’s no wonder students like Collins are looking to college for a different path. Despite the fact that Canada has the second-highest rate of education spending in proportion to our GDP, we’re nearly the worst of the 32 Organisation for Economic Co-operation and Development countries when it comes to placing grads in jobs they are qualified for. That’s especially hard to swallow considering the price of education today. With student debt load reaching a record high—nearly $27,000 for university students last year and about half that for college grads—more Canadians than ever before are considering college as a less expensive, more job-oriented alternative to the ivory towers.

Following the trend at universities, college presidents across the country are reporting increased enrolment since the recession. While Statistics Canada does not have recent numbers for the colleges, the Association of Canadian Community Colleges expects enrolment levels to be at an all-time high this year.

Converts like Collins are not the only ones praising the college alternative these days. Bill Green, chairman and CEO of the $21.6-billion consulting firm Accenture, is an outspoken advocate of community colleges. The greatest proof of his commitment: he convinced his 21-year-old son David to go to Dean, a community college in Massachusetts, instead of one of America’s elite private universities. “I believe many people who attend universities might be better served attending a community college to get started,” says Green, also a Dean graduate. “Colleges have been overlooked, undervalued and underappreciated for far too long.”

In the U.S., community colleges are seen as a panacea for the country’s economic woes: President Barack Obama and second lady Jill Biden held the first-ever White House summit on community colleges in October. International foundations, including the Bill and Melinda Gates Foundation, also pledged millions of dollars to community colleges.

Even those on the inside of the ivory towers advise students to consider their options. Laura Penny, a professor at Mount Saint Vincent in Halifax and author of More Money Than Brains, an acerbic tome about higher education today, says university is too often seen as the default after high school. “People who want a broad experience or who are going to qualify for medicine, law or graduate degrees should go to university.”

Everyone else, she says, should look elsewhere. “I think a lot of people who go to university would be much happier in community college, and less indebted. Especially if what they are looking for is the credential for a job. A university degree does not guarantee a job.”

Ashley Pelletier took the college route after high school. Now, at 24, she has already landed a job as an associate at a big accounting firm in Toronto. “I didn’t know what I wanted to do when I was in high school, and going to college didn’t require all the specific courses that are required for university.” She applied to a variety of programs at Seneca College and settled on accounting.

There, she found small class sizes, helpful teachers and lots of guidance for her career. “You get to know your profs and all of them had relevant industry experience,” she explains. “University is totally theoretical, whereas the professors at college are more practical.” While in college, she worked at RBC Dexia, and then translated her accounting and finance diploma into an accounting degree at York University. She sees her three years at Seneca as a bridge to her career. “It was a long haul but I don’t think I would have done as well at university if I didn’t start at college.”

In Canada, colleges were formed after universities to meet the demands of the growing manufacturing sector and to provide local and accessible education. “But along came the knowledge economy,” says Ray Ivany, the president of Acadia University in Nova Scotia, who also headed the Nova Scotia Community College. “We’ve recognized that, gee, students move back very smoothly between both college and university. Less and less it’s seen as college or university but more as a higher education sector, which has been the norm in Europe and Australia.”

Ivany is optimistic that people will approach their education with more openness now that more students are moving between the two—or doing both. “There’s this idea that on the university side, you develop as a person,” he says. “But if someone goes to a three-year program in technology at college they develop as a human being as well.”

The stigma sometimes attached to college will likely fade further as many university graduates consider the college option in order to get a job. After all, Canadians are required to train themselves more often than in similar economies, according to the OECD.

But there’s another effect of this move to a vocational education. While the colleges have been thriving (even in the recession they boast at least 80 per cent employment rates after graduation), this boom has been coupled with the decline of arts education across North America. A recent sign of the fading tradition came when the University of Toronto’s Centre for Comparative Literature was asked to shut its doors this year. After some push-back by the faculty, they will remain open until at least next year, but beyond that there’s no certainty, says Jill Ross, graduate coordinator at the centre. “Whenever there is a budget crisis, the things that get targeted first are humanities departments.” But, she asks: “Is it just because they want to de-emphasize liberal arts and place more attention on other parts of the university?”

The trend is similar in the U.S., where liberal arts programs have undergone an identity crisis, and have begun to introduce vocational courses, such as finance and accounting, to appeal to a broader range of students. On Oct. 1, the president of SUNY Albany, George M. Philip, announced that the French, Italian, classics, Russian and theatre programs will close. Philip says his decision was because comparatively fewer students are signing up for the arts.

But there are other reasons for the decline. Andrew Hacker, co-author of the new critique Higher Education?, says this shift has come as a result of arts programs making themselves irrelevant by spending too much on research and retaining star professors, and too little on actually teaching.
“Professors can now burrow into their minutiae,” he explains over the telephone from New York. “In a recent 15-year period, there were 3,217 studies written by professors on William Faulkner. Come on now.”

Though he and co-author Claudia Dreifus still feel the liberal arts give students a solid grounding for any career, in the book they name Raritan Valley Community College in New Jersey as one of the “schools they like,” citing its cost-effectiveness, small class sizes and flexibility. “For young people with limited budgets, we recommend community colleges as a place to begin,” they write. “They are not just centres of vocational training; they also set and achieve high standards in the arts and sciences.”

Whether higher education institutions should churn out citizens or workers is an issue that has been hotly debated in North America. Philosopher Martha Nussbaum of the University of Chicago has been on the front lines of defending the liberal arts. “The abilities associated with the humanities and the arts are also vital, both to the health of individual nations and to the creation of a decent world culture,” she writes. A liberal arts education cultivates empathy in students, and furnishes them with an imagination and the ability to understand others.

Closer to home, Peggy Heller, director of the Foundation Year, a liberal arts program at the University of King’s College in Halifax, has been mounting a similar argument. “The strength of a solid liberal arts education is that it teaches you a flexibility of mind, an openness, the ability to think and write, and to make your own way in the world.” But she concedes that there’s been a decline in funding and applications for the Foundation Year since the recession, and traces the problem back to high schools, which she says have abandoned the liberal arts. “There’s this new emphasis in high schools on giving students careers. Students are pushed into science, and come to university thinking, ‘What’s my career?’ without a good grounding in literature or languages.”

Heller argues that this bottom-line mindset does not lead to a more knowledgeable citizenry. “There’s no evidence that a humanities education disadvantages you.”