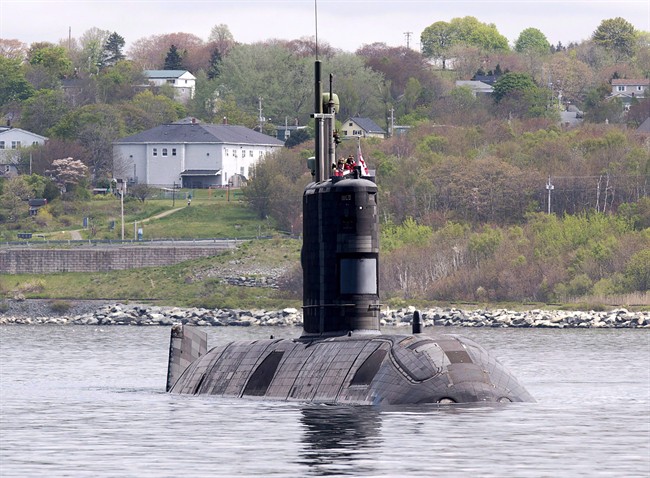 HMCS Windsor, one of Canada’s four Victoria-class submarines, heads out the harbour in Halifax on Thursday, May 26, 2016. (THE CANADIAN PRESS/Andrew Vaughan)

HALIFAX – HMCS Windsor has set off for an upcoming military exercise for a second time after an earlier transatlantic trip was derailed due to mechanical problems.

The Navy says the submarine departed from Halifax Sunday morning to take part in an exercise in the waters off Norway organized by the North Atlantic Treaty Organization.

Just over a week ago, the Windsor was headed to the North Sea for “Operation Dynamic Mongoose” when it was forced to turn back to its port for engine repairs.

The commander of the Navy’s Atlantic forces said he is confident the Windsor is ready to perform alongside its NATO allies.

“Suffice it to say there is work to be done,” Rear-Admiral John Newton said in a statement e-mailed to the Canadian Press. “Everybody who plans and executes submarine operations in an alliance structure works to adjust their parts to accommodate … changes as necessitated by national arisings.”

Windsor may be a little late for the multinational war games, but Newton said the sub should make it to Norway in time to complete most of its exercises. “Most of the boat’s planned program will be recovered,” he said.

Windsor has been busy lately. According to the Navy, the submarine has been at sea for 200 days in the past year. In February, it was forced to dock in the United States due to an issue in its battery cells.

Windsor is the lone operational submarine of the four Canada purchased from Britain in the late 1990s. The second-hand vessels have been plagued with various mechanical problems, including a fire on board HMCS Chicoutimi that killed one crew member in 2004.