Should Canada make it easier for immigrants to send money home?

No country matches Canada on remittances, per capita. Our infographic follows the money

When Piara Singh Bual arrived in Vancouver from India in 1970, he was 18 and alone. With his parents and seven siblings living in a small village in Punjab, he took jobs picking blueberries and worked at a sawmill, sending half of all his earnings back to them. Over the following decades, and now into retirement, the money transfers have continued.

Bual’s situation isn’t unique, but recently released data suggests no country comes close to matching, on a relative basis, how much cash Canadian immigrants send back to their home countries. In 2012 an estimated $23.4 billion was sent overseas, according to new World Bank figures which track remittances. On a per capita basis that’s double what flows out of the United States or the United Kingdom. India was among the countries receiving the largest chunk of that money, while China and the Philippines were other top recipients.

Part of the reason for the great outflow from Canada is the sheer number of immigrants in this country, accounting for roughly 20 per cent of the population. Canada’s immigration point system favours higher-skilled, higher-earning, and thus higher-remitting immigrants. Workers on temporary permits also tend to send much greater amounts of money back home than traditional immigrants, and few countries use temporary foreign workers to the extent Canada does.

But it’s also true that globally the flow of money to developing countries is soaring, hitting $400 billion in 2012 and forecast to grow by another $130 billion by 2015. And those figures only capture funds being transferred through banks and firms like Western Union, not cash packed into suitcases or withdrawals made at ATMs while people are visiting their home countries. The figures are, as Michael Clemens, an economist at the Center for Global Development in Washington puts it, “ginormous.”

Despite the vast sums crossing Canada’s borders, there’s little evidence the government takes much of an interest. Unlike most other countries, no Canadian agency monitors remittances. Often, that information is gathered by central banks, which is how the World Bank calculated Canada’s remittance figures—by working backwards from the countries that received those funds. “Canada is really an exception. It’s amazing that there’s a blank there,” says Dilip Ratha, a senior economist who heads the World Bank’s migration and remittance unit. The result: a great flood of money passing silently through the system. Indeed, when contacted for this story, no one from the departments of Citizenship and Immigration, Foreign Affairs or Finance could even say which government arm oversees remittances.

To Ratha, the government’s neglect is baffling. “Twenty-four billion dollars is leaving the country every year and so many people are benefiting,” he says, adding that this “really complements Canada’s official development policy.” That’s because remittances are viewed as a critical factor in reducing poverty in poor countries. The money often has an immediate impact, going directly to households to buy consumer goods or to invest in education or health care. “It’s arguably more effective than some foreign aid,” Clemens says, which can be siphoned by corrupt governments or otherwise mismanaged.

“If you begin to accept these remittances are contributing to international development, you get the sense people are prepared to argue maybe we don’t need to do foreign aid at all,” says Rowlands. Indeed, the Hudson Institute, an American think tank, lumps remittances in with private aid donations to calculate America’s development impact.

But those who study the dynamic between official aid and remittances warn they shouldn’t be confused. Foreign aid is better suited for larger projects, such as funding an anti-malarial program or rebuilding infrastructure after disasters.

What Canada and other countries can, and should, do more, says Ratha, is to make it easier to send money. To that end, Canada has made progress. Along with other G20 countries in 2011, it agreed to try to reduce remittance fees paid to banks and transfer firms to five per cent—they often reach as high as 24 per cent. Still, economists argue such change is too slow for results that would be dramatic. Remittance costs averaged 7.5 per cent globally in 2012. If that came down to 5 per cent, it would mean another $11 billion sent to families like Bual’s. 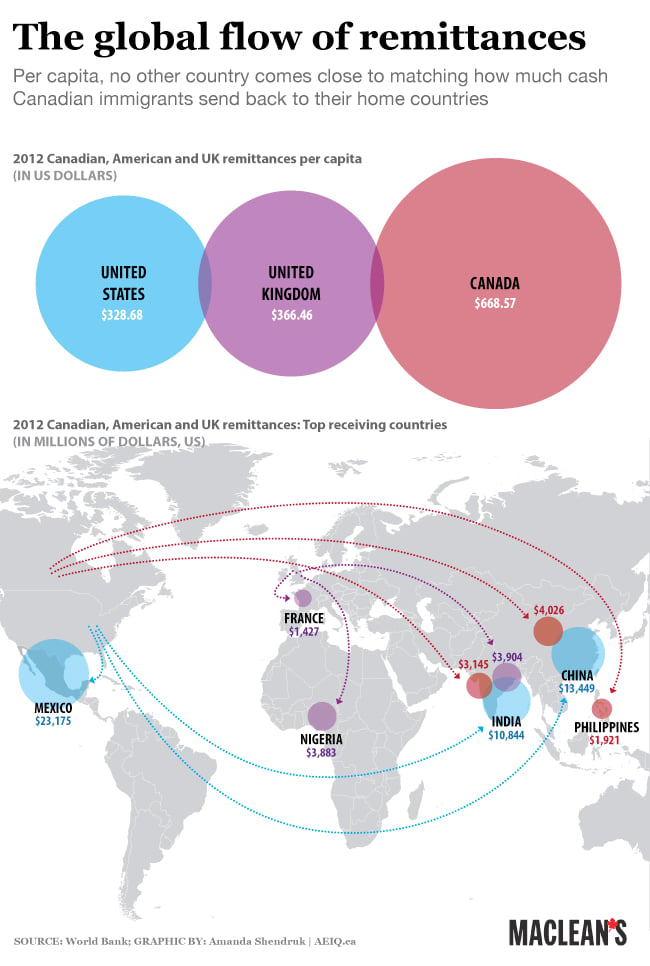