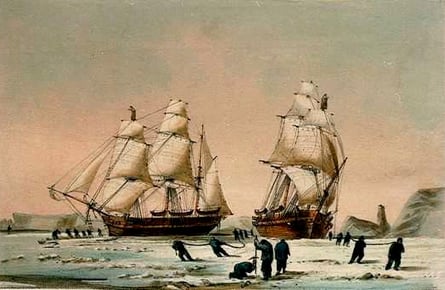 Parks Canada researchers came upon one of the most fabled shipwrecks in marine archaeology this week in Canada’s Arctic. The HMS Investigator sank in the frigid waters of Mercy Bay 157 years ago after it was abandoned by its crew when it became locked in ice during a search for a legendary expedition headed up by Sir John Franklin.

Environment Minister Jim Prentice was among the first people to get a close-up view of the wreck of the HMS Investigator just a few days after it was found by the Parks Canada team.

“We were able to position our Zodiac immediately above the Investigator to peer down in the icy Arctic water, which is crystal-clear,” Prentice said in an interview from Mercy Bay. “It sits perfectly upright in 11 metres of water. When you look down on it, you’re able to see in exquisite detail all the decking and the ship’s timbers and so on. It’s an incredible thing to see.”

The ship’s captain, British explorer Robert McClure, is credited with discovering the Western entrance of the Northwest Passage after he was dispatched by the British government to locate Franklin and his crew, who’d set sail on the HMS Erebus and the HMS Terror. But the experience was a harrowing one for McClure and his fellow sailors.

McClure and the 69-member crew aboard the Investigator quickly became trapped in pack ice, unable to either press on or retreat. The men were forced to endure two savage winters in the arctic while frantically searching for a way out. In all, it would be three years before McClure and the debilitated survivors of the expedition were finally rescued by another British vessel, the HMS Resolute. Not everyone had made it, though. The day before the research team came across the wreck of the Investigator, they found the unmarked gravesites of three sailors who died of scurvy just before McClure ordered the crew to abandon the ship.

Even after abandoning the Investigator, McClure’s adventure was far from over. The Resolute, too, soon became trapped in ice forcing the men aboard to spend another winter in the Arctic. By the time McClure made it back to England aboard the HMS Northern Star, he’d been gone four years.

He never did find Franklin nor his ships, and archeaologists have been looking for the Erebus and Terror ever since.

“Franklin’s ships are physical links to some of the greatest stories of human exploration on this planet,” says James P. Delgado, the president of the Institute of Nautical Archaeology at Texas A&M. Delgado, who’s participated in archeaological searches in the Arctic before, says the discovery of the Investigator is “significant not only to Canada, but also to the world.” Even though Franklin’s ships remain an elusive target for nautical archaeologists who’ve come to treat them as a holy grail of sorts, Delgado believes the Investigator could yield “written records, even photographs that will add more detail to a story that essentially ended with the last Inuit sightings of the last of Franklin’s crews.”

Parks Canada’s research team is currently searching the remains of the Investigator using a robot—known as Little Bruce—to take pictures and video of the wreck. It’s still not clear how much the artifacts found onboard will add to the trove of knowledge about the interactions between the sailors and the Inuit, but for the time being, the discovery itself stands out as a remarkable accomplishment, says Prentice. “It represents the convergence of the history of Arctic adventure with the history of Inuit occupation,” he says. “This is a continuous record of our sovereignty.”