As trade with Canada falls under Trump's angry, roving eye, a look back at a U.S. trade deal that helped lead to Confederation 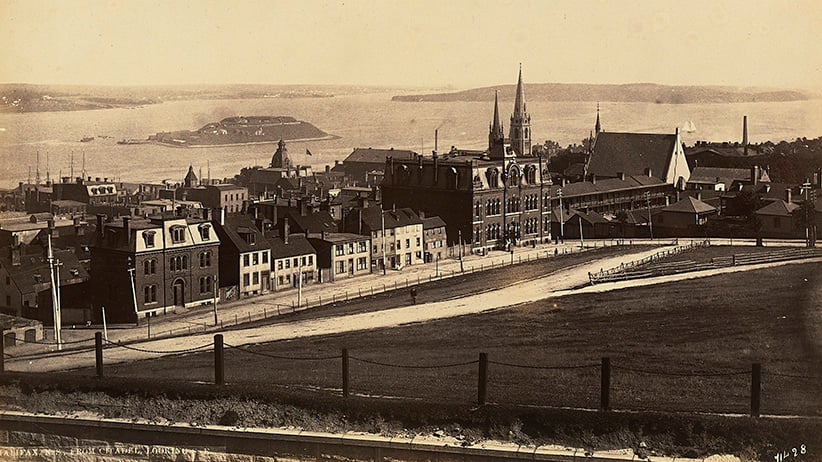 It was bound to happen. With his presidential approval ratings hovering at historic lows, Donald Trump needed to take a swipe at someone to shore up his base. And since a trade war with China is flirting with economic suicide, it was time to Blame Canada, specifically our dairy farmers, notwithstanding Justin Trudeau’s commanding handshake.

Since American policy changes daily, this, too, could pass. But even if the worst-case scenario comes to be and NAFTA is renegotiated, we should try to remember that we’ve weathered worse storms in the past and came out the other side alright. In fact, the abrogation of a major trade treaty with the United States is what got several independent British colonies north of the United States to finally take the plunge into Confederation. Without it, Canada might not be celebrating its 150th anniversary this year.

MORE: For a troubled Trump, Canada is easy pickings

NAFTA wasn’t our first attempt at free trade with the United States. Before Confederation, the British colonies had worked out an agreement with America called the Elgin-Marcy Treaty, an 1854 deal that eliminated a 21-per-cent tariff on raw materials from British colonies in exchange for some concessions, notably fishing rights in the Atlantic. We the North had a banner decade after that, although to be fair, the biggest economic boost came during the last half, when shortages caused by the American Civil War—which stretched from 1861 to 1865—forced the United States to import even basic necessities.

One famous example illustrating just how lucrative the Civil War was for North America’s British colonies was its impact on the whisky business. Although many think Canadian distillers established themselves during Prohibition, it was actually demand during the war (largely for medical purposes) that transformed the industry from small, farmer-owned pot stills into a major industry, best exemplified by the massive Gooderham & Worts facility that came to dominate the eastern port lands of Toronto.

It wasn’t just the northern Union states buying our butter, eggs and whisky, though. Halifax did brisk business in ship repair and, quite controversially, also offered its services to southerners, who paid merchants such as Benjamin Wier—who was famous for flying the General Lee outside his shop in Halifax and hanging out at the Waverley Tavern, a popular hangout for Confederate sympathizers—in Confederate dollars or cotton.

Since several British colonies, especially Upper and Lower Canada as well as the Maritimes, were terminal stops on the Underground Railroad for an estimated 40,000 refugee fugitive slaves, most of us assume our country was one of the good guys during the American Civil War. Not to hear Abraham Lincoln tell it, though—especially after the Chesapeake Affair in Halifax, an event that saw Maritimer pirates capture that American boat until warships intervened. Angry mobs threatened the American sailors when they reclaimed their property.

Salty Nova Scotians weren’t Lincoln’s only problem in the British colonies: His assassination may well have been partially plotted by John Wilkes Booth and his Confederate colleagues in Montreal, a town so full of Southern exiles it could practically have been called Savannah North. Toronto and St. Catherines were also known for extending northern hospitality to southern gentlemen, many of whom found a sympathetic ear in “Canada First” advocates, such as Toronto’s best-known 19th-century white nationalist, George Denison. After the war, Denison would invite Jefferson Davis, President of the Confederacy, to Toronto, where he was welcomed by some 7,000 citizens; incidentally, that’s the same Jefferson Davis whose statue is currently being removed in New Orleans because of its symbolic connection to and public celebration of white supremacy. Many nineteenth-century Canadians seem to have concluded that slavery was the lesser of two evils compared with the Republicans, who were viewed as an imperialist, industrialist threat liable to set its sights north to the existing British colonies after subjugating the south.

#NotAllCanadians had sided with, traded with, or aided and abetted the Confederate cause, of course. But those that did caused plenty of damage to cross-border relations, and there would be payback. Long before the ceasefire, it was clear the Elgin-Marcy free trade deal was dead. Canadian and Maritime businessmen stopped looking south and began looking elsewhere for new, tariff-free markets to soften the thud of the coming punitive tariffs. In 1864, Upper and Lower Canada asked if they could crash the Maritime Union talks. The Atlantic provinces agreed and everyone met in Charlottetown, where delegates washed away reservations over Confederation with copious amounts of food and drink.

That was effectively the first step towards modern Canada: a free-trade agreement wrapped in a flag that ignored a lot of ethical questions regarding whose land it actually was, and whether the colonists even had the right to decide the country’s fate. The west was won after the Alaska Purchase, which became official in 1867 and was taken as a declaration of intent by the U.S. to apply manifest destiny to the entire Pacific-Northwest. Interestingly enough, although Russia, the seller, was primarily motivated by financial hardship, the fact that the deal might weaken the British Empire (given that the entire colony, British Columbia, would be surrounded by Americans), sweetened the deal for them.

Between Russian interference, a weakened England, polarization in the United States and a looming trade war, many soon-to-be Canadians must have had a sense they were living through a real crisis. For others, however, it represented a crisis of opportunity. Colonists demonstrated resourceful ingenuity, created new markets and developed an economic policy that built up infrastructure and industry and, in the end, invented a new country.

From a purely liberal point of view, not all aspects of nation-building and self-invention were equally successful. The parochialism that led to the Canada First movement, which created an excess of nationalist economic protectionism and a culture of xenophobic British-ness that rode roughshod over non-white immigrants and First Nations people is a legacy that we need to avoid repeating. On the other hand, the creative impulses that ultimately formed Canada are a model for economic and political innovation that has been, on the whole, more successful than not.

Since Trump appears to have only been bluffing about drafting an executive order that would see America withdraw from NAFTA, it’s possible that trade conditions will remain as is. On the other hand, if his ratings drop further, we may well have another “crisis of opportunity” on our hands. It’s too soon to say. Before we get too panicked, though, it’s good to keep in mind that this is hardly the first time it’s happened.

After all, we have that first trade crisis to thank for this year’s big party. It’s not every day a country turns 150; it’s a perfect time to think about the set of circumstances that made us who we are and, of course, how to continue to reinvent ourselves. Anything less, would, in fact, be a failure of imagination. And un-Canadian.