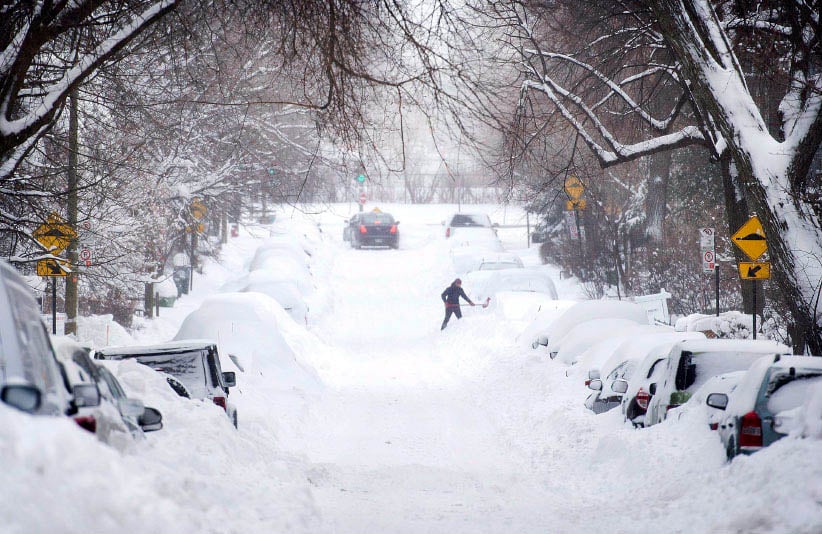 A woman shovels snow from around her car following a winter storm in Montreal, Wednesday, March 15, 2017. (Graham Hughes/CP)

Controversy that erupted in Quebec immediately after this piece was published caused the author to write a Facebook post, which can be found here.

We also wish to correct two errors of fact. Due to an editing error, a reference in an earlier version of this piece noted that “every restaurant” offered two bills. We have clarified this to say “some restaurants will offer you two bills.” We have also removed a reference in an earlier version noting that “bank machines routinely dispense fifties by default.” Read our editorial on this article here.

Major public crises tend to have one of two effects on a society. In the best cases, they serve to reveal the strength of the latent bonds of trust and social solidarity that lie dormant as we hurry about the city in our private bubbles—a reminder of the strength of our institutions and our selves, in the face of infrastructure. Such was the case in New York after 9/11, and across much of the northeast during the great blackout of 2003.

But sometimes the opposite occurs. The slightest bit of stress works its way into the underlying cracks of the body politic, a crisis turns those cracks to fractures, and the very idea of civil society starts to look like a cheapo paint job from a chiseling body shop. Exhibit A: The mass breakdown in the social order that saw 300 cars stranded overnight in the middle of a major Montreal highway during a snowstorm last week.

The fiasco is being portrayed as a political scandal, marked by administrative laziness, weak leadership, and a failure of communication. And while the episode certainly contains plenty of that, what is far more worrisome is the way it reveals the essential malaise eating away at the foundations of Quebec society.

Compared to the rest of the country, Quebec is an almost pathologically alienated and low-trust society, deficient in many of the most basic forms of social capital that other Canadians take for granted. This is at odds with the standard narrative; a big part of Quebec’s self-image—and one of the frequently-cited excuses for why the province ought to separate—is that it is a more communitarian place than the rest of Canada, more committed to the common good and the pursuit of collectivist goals.

But you don’t have to live in a place like Montreal very long to experience the tension between that self-image and the facts on the ground. The absence of solidarity manifests itself in so many different ways that it becomes part of the background hiss of the city.

To start with one glaring example, the police here don’t wear proper uniforms. Since 2014, municipal police across the province have worn pink, yellow, and red clownish camo pants as a protest against provincial pension reforms. They have also plastered their cruisers with stickers demanding “libre nego”—”free negotiations”—and in many cases the stickers actually cover up the police service logo. The EMS workers have now joined in; nothing says you’re in good hands like being driven to the hospital in an ambulance covered in stickers that read “On Strike.” While this might speak to the limited virtues of collective bargaining, the broader impact on social cohesion and trust in institutions remains corrosive.

We’re talking here about a place where some restaurants offer you two bills: one for if you’re paying cash, and another if you’re paying by a more traceable mechanism. And it’s not just restaurants and the various housing contractors or garage owners who insist on cash—it’s also the family doctor, or the ultrasound clinic.

Maybe all this isn’t a huge deal. Sure, Quebec does have the largest underground economy as a proportion of GDP in Canada, but it’s only slightly bigger than that of British Columbia. But if you look at the results from Statistics Canada’s 2013 General Social Survey, which looks at the broad measures of social capital of the sort made famous by Robert Putnam’s Bowling Alone, his book about the collapse of the American community, the numbers for Quebec are disheartening.

For example, the residents of this province also report the smallest family and friend networks in the country. The proportion of people who report having zero close friends is highest in Quebec, and quadruple that of people living in top-rated Prince Edward Island. And while 28 per cent of Quebecers over the age of 75 report having no close friends, the average for the rest of the country is a mere 11 per cent. It goes on: When it comes to civic engagement, rated by levels of volunteering and membership in groups and organizations, Quebec ranks dead last. The volunteering number is particularly shocking: the national volunteer rate is 44 per cent, while Quebec’s is 32 per cent. The only other province below the national average is New Brunswick at 41 per cent.

Some of this will be defended on the grounds that it is part of what makes up the province’s unique character. Sure, some restaurants will offer you two bills. Don’t be so uptight! It’s part of the place’s charm, along with the love of prog rock and the mandatory jaywalking. But the numbers show that it is close to inconceivable that this could happen anywhere else in the country. For most of these figures, Quebec isn’t just at the lower end of a relatively narrow spectrum: rather, most of the country is bunched up, with Quebec as a significant outlier. At some point, charm and uniqueness betrays itself as serious dysfunction—and the famous joie de vivre starts to look like nihilism.

And then a serious winter storm hits, and there is social breakdown at every stage. In the end, a few truckers refuse to let the towers move them off the highway, and there’s no one in charge to force them to move. The road is blocked, hundreds of cars are abandoned, and some people spend the entire night in their cars, out of gas with no one coming to help. Forget bowling alone. In this instance, Quebecers were freezing, alone.

Andrew Potter is the Director of the McGill Institute for the Study of Canada.