Sponsored by strangers nearly four decades ago, Phung Tran is paying forward the life-altering favour—with some help from her 'Canadian grandmother' 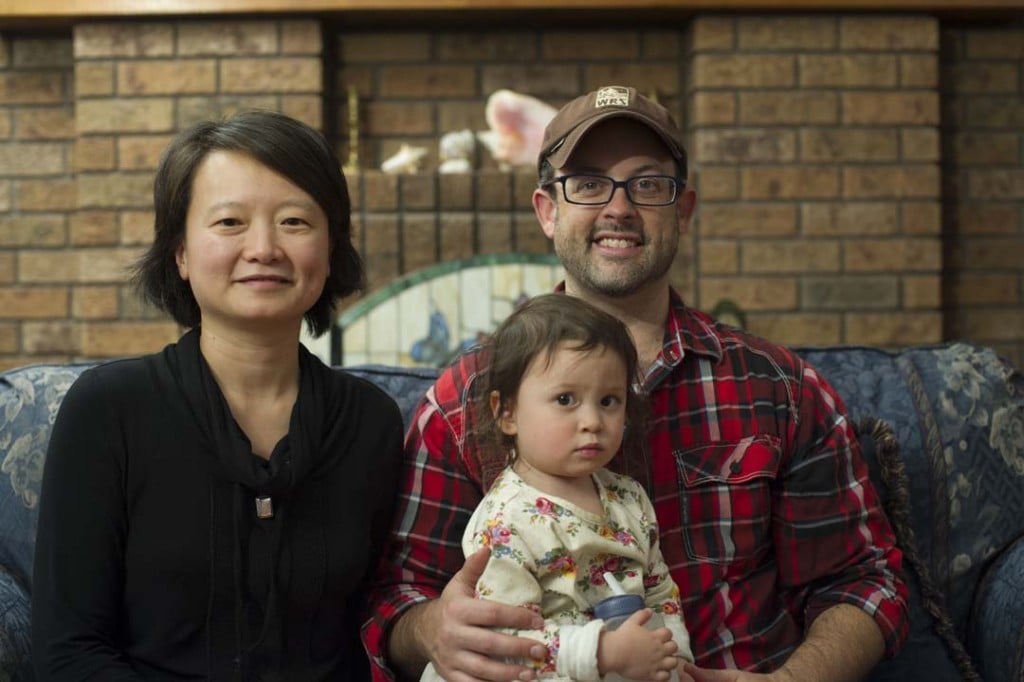 When Phung Tran first saw the photograph—a little Syrian boy, washed ashore after drowning in the Mediterranean Sea—she immediately thought of another young refugee: herself. Nearly four decades earlier, it was her family that embarked on a similar life-or-death voyage, part of the massive wave of Vietnamese “boat people” who fled the grips of Communism in the late-1970s. “When the photo of Alan Kurdi was all over the place, it was pretty tough for me,” says Phung, who was still a baby when her mom and dad plotted their escape. “There is always that sense of guilt: ‘Why did I make it when so many others didn’t?’ ”

Phung and her parents eventually reached the safety of a Malaysian refugee camp—then Canada, thanks to the generosity of strangers in small-town New Brunswick. “We were sponsored by a United Church,” says Phung, now 38. “It is part of my life. It is part of my history.”

All these years later, Phung is paying forward that generosity. This time, she is the one helping desperate strangers find safe haven in Canada.

Now a biologist in Peterborough, Ont., Phung is part of a local group that rallied together, in the aftermath of Alan Kurdi, to sponsor Syrian refugees (in their case, a single mother and three children who escaped ISIS-controlled territory—and who made headlines around the country yesterday after a home video of the kids’ first toboggan rides went viral). The sponsorship group—whose journey is featured in the current Maclean’s cover story—is an inspiring collection of Canadians, from school teachers to university professors to a decorated soldier who served in Afghanistan. But Phung’s story in particular is so poignant, so touching, that it triggered more than a few tears among fellow group members.

Especially the part about where she got her share of the sponsorship money.

The story began in 1979. There was no Internet back then, no Twitter, but when those black-and-white images first hit front pages—tens of thousands of Indochinese refugees, fleeing for their lives on flimsy, overcrowded boats—the reaction was the same: Canadians wanted to help. They needed to help.

Prime minister Joe Clark responded with a now-historic pledge, vowing to open Canada’s doors to 50,000 boat people over the next 18 months (a target later boosted to 60,000). More than half would end up being privately sponsored. “At that stage, the refugee sponsorship program had never been tried; it had just been invented,” says Michael Molloy, the now-retired civil servant who oversaw the colossal resettlement effort. “And yet Canadians grabbed it and ran with it. We didn’t have to thump the drum at all.”

Eleven of those Vietnamese refugees ended up in Sussex, N.B., their resettlement paid for by the parishioners of St. Paul’s. “We had to raise $12,000,” recalls Daniel Keith, clerk of the session at the time. “Amongst the congregation, everyone just ponied up.” The newcomers included a young couple, Loc and Chu Tran, and their 18-month-old daughter, Phung. (A local newspaper published an article about the Vietnamese arrivals, snapping a photo of little Phung sitting on her mother’s lap. “The happiness she feels is quite apparent,” the caption read.)

Daniel Keith’s daughter, Mary, first met the Trans in the church nursery on a Sunday morning. Mary was pregnant with her second daughter, as was Chu. “Chu looked across the room at me and I saw her hand slide down her stomach,” says Mary, now 65. “I thought to myself: ‘She is pregnant.’ I can still remember that moment, and I often think about how that gesture bridged the whole cultural divide.” It also marked the beginning of a lifelong bond between the Trans and the Keiths. They are family now, not friends.

A teacher back in South Vietnam, Phung’s father quickly found work at a refrigeration company, then at a poultry plant. In between shifts, he took English classes—in Saint John, 70 km away. (Parishioners volunteered to drive him back and forth.) When he and his wife were busy at work, Loc would often ask if Daniel and his wife, Ann, could babysit. They never refused. “My mother was a very kind person, but she didn’t let people into her life easily,” Mary says. “She did completely in this case. She just loved those children dearly.”

Phung and her baby sister, Lea, spent so much time at the Keith home that they came to consider Ann and Daniel their “Canadian grandparents.”

“They were the couple who spent the most time with us when we first came to Canada,” Phung recalls. “They had us over, babysat us, looked after us while my parents were working two or three jobs trying to get their feet on the ground. They did all those sorts of things that grandparents do.”

Mary still has photos of the Tran girls playing with her daughters, Frances and Eliza. “They enriched our lives so much,” she says, her voice cracking. “Helping this family was probably the most gratifying thing I’ve ever done in my life.”

After four years in New Brunswick, Loc and Chu made the difficult decision to move their family to Toronto, 1,500 km away. Though forever grateful to everyone at St. Paul’s, especially the Keiths, they felt Ontario offered the best future. “It was sad for us,” says Daniel, now 94, over the phone from his Sussex home. “Loc was just like a brother to me.”

Despite the distance, the families never lost touch, via phone calls and letters and the odd road trip. The Keiths followed from afar as Loc and Chu, both employed at a duck farm, reaped the benefits of their hard work. They bought a home in suburban Newmarket, put their kids through post-secondary school, and saved enough for a comfortable retirement. “In some ways, I think they’re still in shock,” Phung says of her parents. “They have a little house here on Pigeon Lake, just outside of Peterborough. And their kids have houses now.”

A graduate of Trent University, Phung works on species-at-risk legislation for the Ontario Ministry of Natural Resources. She met her husband, fellow biologist Brad Steinberg, while conducting field research at Algonquin Park. They have a son, Jack. When their daughter was born two years ago, they named her Annie—in honour of Phung’s Canadian grandmother.

Sadly, Ann Keith was in a nursing home by then, suffering from late-stage Alzheimer’s disease. “It brought tears to my eyes,” Daniel says, remembering the first time he heard the baby’s name. “I tried to tell my wife, but I don’t know if she could take it in.”

Ann Keith died on Dec. 2, 2014, shortly after her 66th wedding anniversary. A few months later, Phung received a letter in the mail—with a cheque from Ann’s estate. Ann had inherited some money late in life, and before Alzheimer’s clouded her mind, she crafted a will that ensured all her loved ones, the Trans included, received a share. “We carried out her wishes right down to the T,” her husband says.

Phung was so surprised by the letter that she phoned Mary in New Brunswick to make sure it wasn’t a mistake. “I didn’t know if I deserved it,” she says. “I was stunned.” It’s what Mom wanted, Mary assured her. “It confirmed that she felt we were her grandkids, too,” Phung says.

She and Brad invested some of Ann’s money in the kids’ RESPs, but weren’t quite sure what to do with the rest. Then, in mid-September, Phung read a Facebook message posted by a friend, Kristy Hiltz. A veterinarian, Hiltz and her husband were recruiting others to help co-sponsor a family of Syrian refugees.

In an instant, Phung and Brad knew exactly what to do with the rest of Ann’s inheritance, pledging $1,000—and one year of their time and energy—toward Kristy’s group. “This was a way for Phung to sort of pay it forward,” Brad says. “Someone 35 years ago, strangers, brought her family over, and for us to be able to do the same thing was pretty important.”

A perfect tribute to Ann’s memory.

“I’m proud of Phung, I really am, and I tell her so,” says Daniel, as sharp as any man in his mid-90s. “I hope this family from Syria finds as nice accommodations as the Tran family did when they came here.” Do you have any advice for Phung and the rest of her group? “No, I wouldn’t have to give her advice,” he replies. “She knows what to do. She knows how we treated her. Just make sure that they know you care about them.”

Phung messaged Mary on Facebook to tell her she was helping to sponsor Syrian refugees. “It just seemed impossible,” Mary recalls, trying again not to cry. “I can still see that little face, and now here she is, reaching out in the same way. It is just lovely.”

For Phung, joining the group also provided something else: the motivation to learn more about her own story. She was too young to remember her family’s harrowing boat ride to Malaysia, and her parents have shared few details over the years. “We had to make the decisions we had to make,” was the extent of their answer, whenever she asked. “This whole experience has given me that push, that opportunity, to talk about these things and ask my parents questions without feeling awkward or out of place,” she says. “It has meant so much to me.”

She learned that her grandfather paid smugglers 3.8 kg of gold for 16 seats on wooden vessel packed with 251 people. That the motor conked out in the middle of the sea. That there were no maps or compasses. That Thai pirates raided the boat, robbing passengers and raping women. “Seeing Alan Kurdi washed up on that beach, I was younger than that,” Phung says, holding back her own tears. “If I was in a similar situation now, my son is six and my daughter is two. I can’t even comprehend what that would be like.”

Her parents certainly can—but they try to focus on the end of the story, not the middle. As her father made sure to tell her during one of their recent conversations, he will never forget when “the Canadian delegation” showed up at the camp to conduct interviews. Or when he watched Phung play in snow for the first time, her hands red from the cold, a huge smile on her face.