How admitting Syrian refugees from Jordan will work 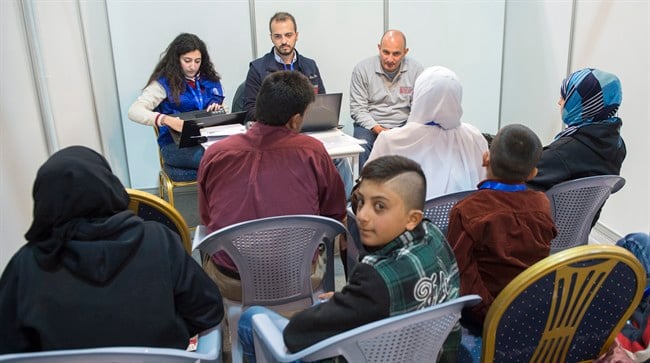 A young Syrian refugee looks back as his family are being interviewed by authorities in hope of being approved for passage to Canada at a refugee processing centre in Amman, Jordan, on Sunday, Nov. 29, 2015. (Paul Chiasson/CP)

AMMAN, Jordan – The Canadian government has now begun processing refugee cases for admittance to Canada under the government-assisted refugee component of the Syrian resettlement program.

The cases are first referred to Canada by the United Nations refugee agency, and then, at a military facility in Amman, here is how the process is unfolding.

1) Getting started. A family enters, is registered, and then takes a seat in one of the 500 grey plastic chairs set up in a waiting room. They get a number which they wear on a lanyard around their neck. When it is their turn, the International Organization for Migration and the Danish Refugee Council assist them in filling out the forms required from the Canadian government. Their photograph is taken.

2) Biometrics. Up to 10 machines will be used to take in biometric information from the applicants, including their fingerprints. The information is checked for any security risks. The military is currently assisting in this process.

3) The interview. Canadian officials will then interview the entire family. It is a broad-based conversation, going over some of the things the UNHCR would have asked them before referring their file and also checking for potential red flags — or potential additional reasons to accept them, like family in Canada.

4) Medical tests. A battery of tests are run on potential newcomers. Right now, appointments are being scheduled for a future date with IOM officials. At some point, there is hope for a clinic to be run right on site for same-day evaluations. The IOM or Red Cross may be called upon to do this, or perhaps a military field hospital will be stood up.

5) The wait. Once they pass those steps, they are “checked out” of the facility and told they will be contacted for follow ups or notified of approval; and then flights will be arranged.