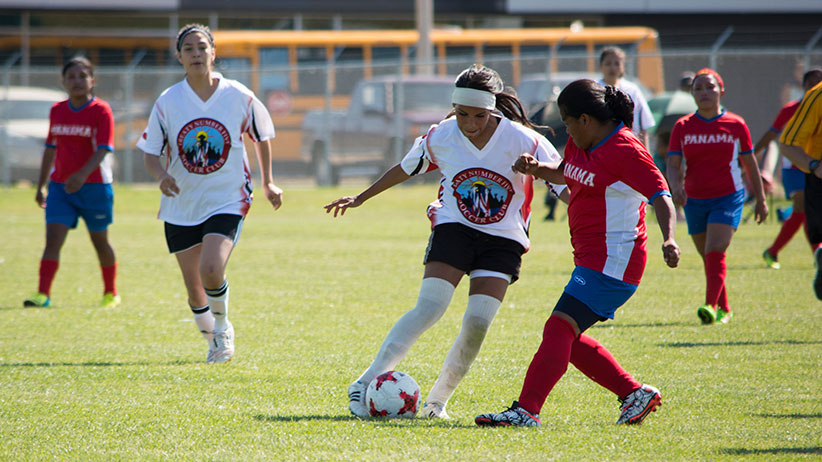 Medals were hand-beaded medallions backed with moose or deer hide. The athletes’ village offered bannock at meals, and more than 1,500 athletes could choose to sleep in teepees or stay at local schools, with extra portable showers outside. The World Indigenous Nations Games have just finished—not in Edmonton as originally planned, but rather on several First Nations in central Alberta.

“It really captures the true, down-to-earth, humble nature that Indigenous people have,” says Laurie Buffalo, a volunteer photographer for the Games. “They’re here for the competition, but when they’re hamming it up for the cameras, that’s one thing,” yet, “at the end, they’re hugging; they’re high-fiving each other. It’s just how Indigenous people are globally.”

The event was the second annual World Indigenous Nations (WIN) Games, a follow-up to the 2015 event held in Palmos, Brazil, decades after Treaty Six Grand Chief Wilton Littlechild from the Ermineskin reserve conceived the idea. Supported by the Alberta government, federal government, First Nations and in-kind sponsors, the event was going to be held in the provincial capital but switched at the last minute to use facilities available in Maskwacis and the Enoch Cree Nation, both in central Alberta. The event attracted almost 40 teams from around the world. Panama dominated canoeing. Paraguay peaked with men’s soccer—“they’re such a world-class team,” says Buffalo— and the Māori from New Zealand entered every single sport.

Women’s soccer was dominated by Canada, as both teams in the final on Friday afternoon were Canadian. The defending champions were the Native Indian Football Association, a team of 15 women partly from the Squamish Nation in B.C., and include one woman who also plays varsity soccer at university. “The sport [offers] holistic balance for our people,” says head coach Dano Thorne. “Especially for the ladies, we want to lift them up and show them this is safe.” They played against the Ahtahkakoop Cree Nation of Saskatchewan. “I feel that Saskatchewan is our big competition here,” Lacey Baker, captain of Thorne’s team, said before the game. Baker’s team won.

Participants did demonstrations of spear-throwing, Dene wrestling and “tug of strength.” In the finger pull, two people lock index fingers and try to pull the other toward his or her chest. Spectators have seen athletes lift logs, impersonate animals and demonstrate a traditional game of kicking their legs two meters in the air.

Lunch hours were spent in formal discussions about truth and reconciliation, and listeners heard from a motivational speaker from Montana, known as Supaman.

But the most powerful moment may have occurred during the opening ceremony, with a speech from Sharon Firth, an Olympic cross-country skiier and a member of the Gwich’in First Nation in the Northwest Territories. Firth said she’d searched for other Indigenous people at the Olympics but felt alone, and that the Olympic opening ceremony couldn’t compare to that of the Indigenous Games this week. Recalling the speech, Buffalo says: “It gave me goosebumps.”