How Dennis Oland got a retrial for second-degree murder 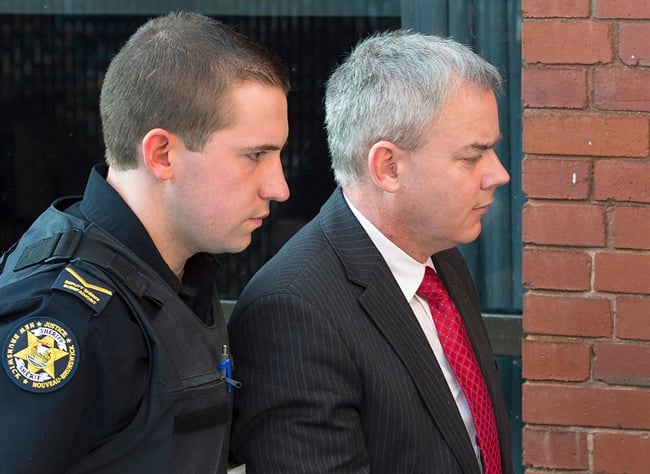 Dennis Oland arrives at the Court of Appeal in Fredericton on Monday, Oct. 24, 2016. (Andrew Vaughan/CP)

From the earliest days in Dennis Oland’s murder trial, the Crown faced an uphill battle to convince jurors that a precarious balance of circumstantial evidence added up to a guilty verdict.

Nonetheless, in December jurors found the member of the clan that owns Moosehead Breweries guilty of the second-degree murder of his father, as family members wept loudly in the Saint John courtroom.

On Monday, New Brunswick’s appeal court overturned the verdict, based on the trial judge’s lack of caution to jurors about how much weight to place on an alleged lie by Oland about the colour of the jacket he wore on July 6, 2011.

Greg Marquis, the author of the book Truth and Honour about the trial, said in a telephone interview that it’s not surprising that a single piece of evidence could be so central, given that the Crown’s case was a weave of evidence, and “all was circumstantial.”

“It’s the combination of this and other things that come together as a package are very powerful combined with their (the jurors’) assessment of (Oland’s) credibility as a witness,” he said.

He recalled that after watching almost all the trial, he was somewhat surprised by the verdict and he had to spend some time reflecting on what the jury might have considered.

He concluded that factors like Oland’s statement to police in a taped 2011 videotaped interview that he was wearing a blue jacket, which was later disproved by video evidence in the trial, was one of the things jurors may have had to fall back on as they struggled with who to believe about the evidence presented.

“There were three or four things that if you believe he was innocent were just unfortunate coincidences. If you believe in his guilt then these things are part of the essential elements,” said Marquis.

As Chief Justice Ernest Drapeau noted in Tuesday’s ruling, there was “no smoking gun.”

MORE: How the Oland trial took New Brunswick by storm

From the early days of the preliminary hearing in Saint John, the Crown’s case faced intense attack from the defence team.

When the first images of Richard Oland’s body lying face down in his office flashed up on a courtroom screen, the presiding judge saw a wide circle of the prominent businessman’s blood splattered around the room as a result of 45 sharp and blunt force injuries to his head.

The defence raised the sharp contrast between those startling visual images of the spattered blood around Oland’s body and the minuscule stains on a brown jacket that contained DNA matching Richard Oland’s profile.

No murder weapon was found. No blood was found in Oland’s car. There were questions about whether the stains were blood or some other substance.

Though there was evidence that a ping was heard from Richard Oland’s cell phone in the general area of his son’s return trip to his home in Rothesay, the cell phone was never found and there was no clear explanation on why Dennis would have taken it.

The defence said that just minutes after the alleged bludgeoning, Dennis Oland was making a call to his wife and within an hour he was videotaped shopping and wearing shorts and a golf shirt.

He was also heard calmly chatting with his aunt, the sister of the dead man.

Defence lawyer Alan Gold passionately argued it simply made no sense that a quiet man without a strong motive would commit a horrific murder in a vicious, 15-minute outburst, and then calmly exit without extensive physical evidence linking him to the crime.

Marquis said in his book’s closing chapter he imagined scenarios of an “innocent Oland” and a “guilty Oland,” and in the guilty scenario he had to imagine Oland doing things such as covering his vehicle or himself with materials that prevented any sign of blood.

He said he came to believe the jurors disbelieved Oland’s testimony in his own defence during the trial.

He said factors like the “alleged lie” by Dennis Oland in the videotaped police interview may have played a role in the juror’s decision, even though there was also video evidence that earlier in the day Oland was wearing a blue jacket at his office and may have simply been confused when he spoke to police.

Marquis said jurors may also have doubted Oland’s testimony about his relationship with his father, as he shifted from the 2011 police video interview describing a relationship troubled by financial disagreements and a love affair his father was having.

In his own testimony, Oland downplayed his troubled finances, and said he had not discussed his finances or the affair with his father when they met at his office to discuss research into their family history.

Marquis said the case has not only an enduring importance because of the prominence of the victim, but also in legal circles: It has been noted as one of the province’s longest murder trials, with one of the most extensive and longest charges ever made to a jury in New Brunswick.

He said he doubts the appeal court ruling raises questions about the validity of jury verdicts, as the appeal court’s decision focuses clearly on Justice John Walsh’s instructions to the jury.