How did Garth Drabinsky get here?

The former Broadway impresario was convicted of fraud. We take a look back. 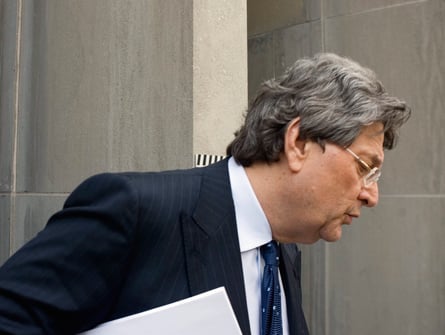 The Garth Drabinsky who sat in a Toronto courtroom today was a pale reminder of the man once known simply—far and wide—as Garth. His eyes were hooded, his head quietly bowed after Justice Mary Lou Benotto pronounced him—along with long-time business partner Myron Gottlieb—guilty of two counts of fraud and one of forgery.

There was no glimmer of the Garth Drabinsky who once blazed so brazenly across the Canadian cultural landscape—the man who reinvented the way we watch movies, who championed Canadian artists, the impresario whose high-spectacle Livent productions (Phantom of the Opera, Showboat and Ragtime) drew and riveted audiences with theatrical illusion. He’d been replaced by a new character—the convicted crook whose greatest illusions were not chandeliers crashing into stages but numbers fraudulently choreographed onto accounting statements at investors’ expense.

Psychoanalyzing Garth Drabinsky once was national sport. He himself provided rich fodder in his 1995 autobiography, Closer to the Sun, in which he proclaimed that Icarus’s tragedy was not arrogance but rather not trying hard enough. His greed for the beauty of art was apparent when he was a boy.  “I wanted to be part of this,” he wrote.

While in law school he founded Impact, a magazine handed out in theatres. After he was called to the bar in 1975 he practiced entertainment law. Drabinksy’s artistry was his ability to take the prosaic tools of tax law and accounting to fund creativity: he was the first to use prospectus to sell film units to the public in the late 70s, a method he used to fund movies (The Silent Partner with Christopher Plummer and The Changeling with George C. Scott). Some investors who believed Drabinsky was denying them their fair share sued. They lost.

Drabinsky also had a talent for shrewd alliances. In the late 1970s he teamed with Nat Taylor, the pioneer of the multi-plex theatre concept. In 1979, they launched the first Cineplex—an 18-screen theatre showing second-run art films and serving cappuccinos in Toronto’s Eaton Centre. Soon after, Drabinsky partnered with the more low-key Gottlieb, the former president of a medium-sized Bay Street brokerage. The two aggressively built Cineplex into a major North American presence with thousands of screens; its more dubious business innovations included the introduction of on-screen advertising in Canadian movie theatres. Drabinsky, an enthusiastic collector of Canadian art, also used the spaces to showcase Canadian artists.

Questions about accounting methods shadowed Cineplex for years. But what forced Drabinsky and Gottlieb out in 1989 was a bitter boardroom battle with partner MCA. They took as their consolation prize the entertainment division—one theater, Toronto’s Pantages, which the detail-obsessed Drabinsky had renovated in spectacular style, and the rights to present one production in it, The Phantom of the Opera. Livent, which was listed on the Toronto and New York stock exchanges in 1993, was born. The same year, the company’s musical  Kiss of the Spider Woman wowed Broadway and won two Tony Awards.

Livent also poured resources into more high-minded spectacle. In 1993, the company built The Ford Centre for the Performing Arts in Toronto, which imported world-renowned classical performers such as soprano Edith Wiens and pianist Andrei Gavrilov for their Canadian debuts.

In 1994, Livent’s controversial revival of the Jerome Kern musical Showboat was hailed as revitalizing the Great White Way, or at least its price ceiling, as the first Broadway show to charge US$75 for a regular orchestra seat.

The company built theatres in New York, Chicago, Toronto and Vancouver, ventures that were revealed during the trial to provide lucrative kick-backs directly to Drabinsky and Gottlieb. Any murmurs of financial improprieties were quashed. In 1995, Toronto investment analyst Alex Winch sent a letter to Forbes that suggested sophisticated accounting methods were being used at Livent to postpone the impact of the high cost of the company’s productions. The company retaliated with a $10-million lawsuit, which was settled out of court and put a three-year gag order on Winch, preventing him from discussing Livent.

What investors didn’t see was an internal Ponzi scheme that inflated profits while revenue was shifted under the radar from one show to finance another. It all came tumbling down in 1998, when  Michael Ovitz, the former president of the Walt Disney Company, bought a 12 per cent stake and installed a new management team. A forensic audit  unearthed widespread accounting irregularities. In November, Drabinsky and Gottlieb were out.

The two were indicted the following January by the U.S. attorney’s office in Manhattan on 16 counts of fraud and conspiracy, charges they have, to date, willfully ignored. Later that year, the Ontario Securities Commission charged a group of former Livent executives, including Drabinsky and Gottlieb, with securities violations, a matter still to be resolved.

The  resilient Drabinsky forged on, opening the Drabinsky Gallery in Toronto in 1999 for contemporary Canadian artists. He also spearheaded marketing projects for the National Post and the Toronto Argonauts. After criminal charges were laid in 2002, he continued to hatch new projects such as “Pamela Wallin Cultural Weekends” in Muskoka. He teamed up with Gottlieb again at a venture called The Visual Bible, a former uranium company that, in a transformation that will seem odd only to those unfamiliar with NASDAQ-traded stocks, had morphed into a Christian-themed movie company. Their first production, The Gospel of St John, was released in 2003 to critical acclaim but disappointing DVD sales. In 2005, amid the flutter of litigation, the company filed for bankruptcy.

By then Drabinsky had remarried former paralegal Elizabeth Winford and was on to his next project, the reality show, Triple Sensation, a Canadian version of American Idol that’s more multi-disciplinary and less mean. It debuted on the CBC last year with Drabinsky as the executive producer and a judge. The second season is in the can and set to air in June.

Drabinsky’s future is less certain. The two Livent founders each face a potential 38 years in jail; the Crown is expected to ask for at least an eight-year sentence for each. But a sluggish appeal process, which will inevitably be set in motion, could delay any incarceration for years.

“I am the impresario of my own destiny,” Drabinsky wrote hubristically in Closer to the Sun. At the time, he was the toast of Broadway and freshly honoured with an Order of Canada. Today, as he sat in the harsh theatre of a Toronto courtroom, those words took on a prescient, ominous new meaning.

Update (April 16): Drabinsky and Gottlieb’s three-day sentencing hearing has been deferred until June 3.