How Indigenous people are rebranding Canada 150

The Canada 150 birthday celebrations could stand to be more inclusive of the Aboriginal experience. Vancouver is trying to make that happen. 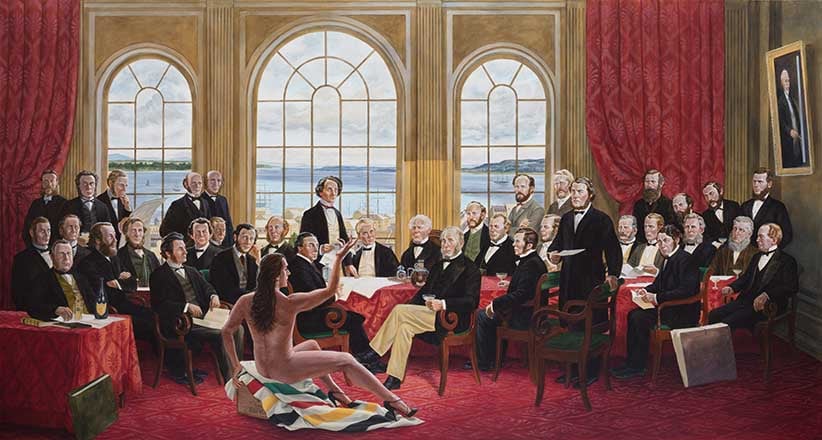 A painting called “The Daddies” by artist Kent Monkman from his show Shame & Prejudice: A Story of Resilience. (Kent Monkman)

Believe it or not, Indigenous people are responsible for salvaging Vancouver’s sesquicentennial bash. For a time, the city considered boycotting Canada 150. Two years ago, when Ottawa put the squeeze on the city to sign on to the grand jubilee, city staff registered serious discomfort. Exalting Canada’s colonial past two years after the Truth and Reconciliation Commission delivered its calls to action seemed regressive, and potentially harmful to the city’s new relationship with local First Nations. Vancouver had recently designated itself a “City of Reconciliation,” 70,000 had marched in support of rapprochement and Deputy Mayor Andrea Reimer was learning Squamish. Staff came to her proposing the opt-out.

Reimer wasn’t opposed, but wanted input from the city’s Urban Aboriginal Peoples Advisory Committee first, she says. The nine-member panel, which advises city council on how to better include Indigenous people and perspectives in city life, came back with a different idea—one council unanimously approved: Why not celebrate the city’s Indigenous history and culture instead?

READ MORE: In time for Canada 150, a fight over ‘where it all began’

So Vancouver, whose Indigenous population of 53,000 ranks third-highest among Canadian metropolises—after Winnipeg (78,000) and Edmonton (62,000)—is doing just that, with a $7-million event it’s calling Canada 150+. The plus symbol—another Advisory Committee suggestion—was added partly to counter the enduring myth that Canada prior to contact was empty and in need of civilization.

So, far from being another hurrah for Canada, the event is deliberately challenging our collective amnesia. And it’s receiving federal funding to do so (costs are being split between the municipal and federal governments, as in other cities). Canada 150+ launches in English Bay in mid-July with a traditional canoe welcome, followed by a nine-day arts festival in Vancouver’s downtown. Nightly headliners include acts like Cree icon Buffy Sainte-Marie, but the focus is the history and culture of the Musqueam, Squamish and Tsleil-Waututh, the three Coast Salish nations on whose unceded territories Vancouver is built. They have been here longer than the English have been in England. Their culture was thriving when Dublin belonged to the Vikings and Sicily was ruled by Muslims.

“We are taking a huge risk—we don’t know how the public is going to react,” says Ginger Gosnell-Myers, the city’s first manager of Aboriginal relations. She is Nisga’a and Kwakwaka’wakw, a cousin of another Kwakwaka’wakw powerhouse, Justice Minister Jody Wilson-Raybould. Reimer, for her part, doesn’t seem to much care whether the event sparks controversy. Whether or not you have the compassion-based belief that Canada has a moral responsibility to change, she says, it’s clear the traumas of the past are crippling the present, financially and otherwise. “We need to start doing things differently.” And after all, Gosnell-Myers adds: “None of us is going anywhere. We have to learn to live together—in a respectful way, and in a truthful way.”

Underlying the work of the most expensive reconciliation project the city has ever undertaken is a multi-year attempt to re-root Vancouver in the culture of its earliest inhabitants. The next step, a process that could see key place names replaced with Indigenous ones, is potentially more controversial. “Bridges, streets and buildings” are all open to consideration, Reimer says. Emotions will run high, but many believe it’s time.

READ MORE: How you can celebrate Canada’s 150th anniversary

Vancouver sits near the heart of Canada’s pre-contact capital. By the 18th century, twice as many lived in thriving, well-fortified villages of fishers, tanners, potters and toy-makers surrounding the Georgia Strait as in the rest of Canada combined (more, even, than in New York). But while some 200 B.C. place names commemorate the voyages of Captains Cook and Vancouver, who arrived toward the end of that century, there isn’t even a plaque to commemorate a smallpox plague that wiped out all but 10 per cent of B.C.’s Indigenous inhabitants—arguably the most significant event in the province’s history.

No surprise, then, that Canada 150 is spurring a creative outpouring among Indigenous artists to shine light on some of these painful chapters. “Remember, Resist, Redraw,” a cross-country poster project led by the Graphic History Collective, is putting an Indigenous lens on key events in Canadian history. #Resist150, a multimedia project led by Metis artist Christi Belcourt, features poems, shared histories and other “acts of resistance,” like the 150 traditional tattoos Belcourt is aiming to ink over the coming year. And the year’s most talked-about art exhibit, Kent Monkman’s Shame and Prejudice: A Story of Resilience, which opened last month in Toronto, uses the sesquicentennial to ridicule and expand Canada’s rigid, national narrative.

Monkman, a Winnipeg-raised Cree artist, reimagines the grand chronicle, sometimes by inserting his flamboyant, drag queen alter ego, Miss Chief Eagle Testickle. You’ll find Miss Chief, lover of Louis Vuitton and pink heels, in, for example, a cheeky send-up of Robert Harris’s famed portrait of the Fathers of Confederation. She’s nude, seated facing them, her legs akimbo. The men look on in horror, and in lust. He called it The Daddies.

It’s not all fun and transgression, though. In The Scream, a visceral comment on residential schools, Mounties and Grey Nuns tear Indigenous children from their mothers’ arms. Five spectacularly large oil portraits depict all the ways Winnipeg’s colonial history is infecting its future—the racism, violence, alcohol, despair. To Monkman, apparently, the sesquicentennial is synonymous with all that has been lost.

But his art—gratifyingly—is no longer truly subversive. A truer, less simplistic Canadian narrative is finally starting to emerge. It rejects the idea of 1867 as a starting point, acknowledges the country’s many sins and returns the Indigenous perspective to where it belongs: front and centre, as the best and most enduring part of the Canadian story—a tale that stretches back not 150 years, but 12,000. That’s the version Vancouver is hoping to tell.