In August 2018, families honour long-missing relatives at a burial ceremony in France 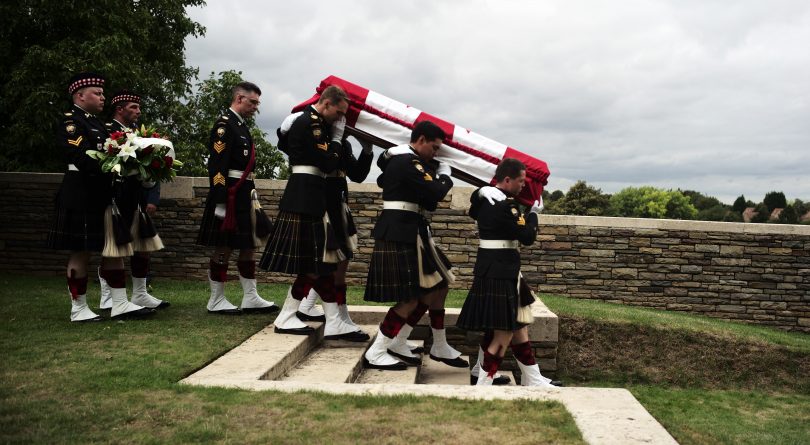 When a funeral is happy, it is usually because the deceased has asked loved ones to celebrate his life. But this funeral was happy because attendees finally knew the identity of the dead.

Seven years ago three soldiers’ bodies were found near a village in Northern France. Another was found in a construction site. The bodies all seemed to belong to Canadian World War I soldiers. None of this was unusual. Many Canadian soldiers fought in many battles during the war. But then, members of four families travelled from Canada to Loos-en-Gohelle, a small French village, to lay to rest these soldiers, some of whom were unknown relatives.

That was very unusual.

The story ended with names carved on tombstones at last; for one family it began with a name, too.

Gavin Woods likes to say it started with a fluke of some bad weather. He lives in Regina, and when his son had a business meeting in Calgary in March 2013, he tagged along to visit friends and see the sights—only to discover that all he could see was snow. He and his friends were stuck indoors with nothing to do; grasping for a conversation topic, he remembered that his host was interested in ancestry. Gavin was named after a relative, Gavin Wilson, a soldier who died in the Great War, so to kill time he asked his friend to do a bit of genealogical sleuthing. The friend entered Gavin Sr.’s name into a government website, they learned a few biographical facts, and then the weather cleared. Gavin saw the sights of Calgary and promptly forgot what he and his friends had done that snowy day.

That was it. But that was enough when, three years later, a public servant contacted Gavin and asked him if he had been looking for information about Gavin Wilson. He had been, yes. Well, public service members had been looking for Gavin Woods. They wanted to tell Gavin that he had three great-uncles who had fought and been killed in the Great War; that they believed the body of one of them, a Sgt. Archibald Wilson of the 16th Battalion, may have been found at a construction site in France in August 2011. Munitions were being cleared from land near the village of Vendin-le-Vieil and workers found a few skeletons, all later presumed to be Canadian. Near one of them they also found leather boots, and buttons from a Canadian Scottish Regiment unit in the 16th Battalion engraved with the cross of St. Andrew. The public ofﬁcials wanted to prove the identity of the fallen soldier.

Gavin had never heard of the man, who the bureaucrats named as Archibald Wilson, his great-uncle. Though he was in shock, he was not in disbelief: Like many people who lived through the war, his grandmother never talked about the things it took from her. The ﬁghting took her brother’s life and, with her silence, effectively his name, too.

Once it’s gone, it is not easy to get a name back, but it isn’t impossible. The possessions near the skeleton gave Canada some information, but the soldier’s identity was in his bones. Extracting an identity requires many people, but two are indispensable: a forensic anthropologist and a DNA donor. The forensic anthropologist would come along a few years after the Vendin-le-Vieil bones were found: Sarah Lockyer had been training for this since she was 16 years old, when she saw a Canadian true-crime drama on TV featuring a woman whose job was matching names with dead people. “I want to do that!” she had thought to herself. So she did. Lockyer is now coordinator of the casualty identiﬁcation program with the Ministry of National Defence, which investigates unidentiﬁed remains from both world wars and the Korean war.

But she knew a DNA sample had to be donated by the right person (not every descendant is viable for this purpose). If her belief about the soldier’s identity was correct, there was only one woman connected to the family who ﬁt the bill. That woman, Archibald’s niece, happened to be living in a care home with dementia. Eventually, they got permission to retrieve a DNA sample from her. Then the waiting began.

It took two to three months to analyze each DNA kit from potential relatives connected to the three 16th battalion soldiers’ relatives, in addition to the remains of a fourth soldier, from the 26th Canadian Infantry Battalion, found in a construction site. Lockyer then had to compare the results, which were not always clear, to all the historical and biographical information she and her colleagues knew about the fallen soldiers.

The decision to name remains is never made lightly: Lockyer wrote a report and made a recommendation; that was submitted to an external forensic anthropologist who checked her work; ﬁnally, everything was put before a review board. The review board is comprised of 10 people—forensic dentists, military ofﬁcials, historians—and they had to come to a unanimous decision on every name. In March 2018, they did. 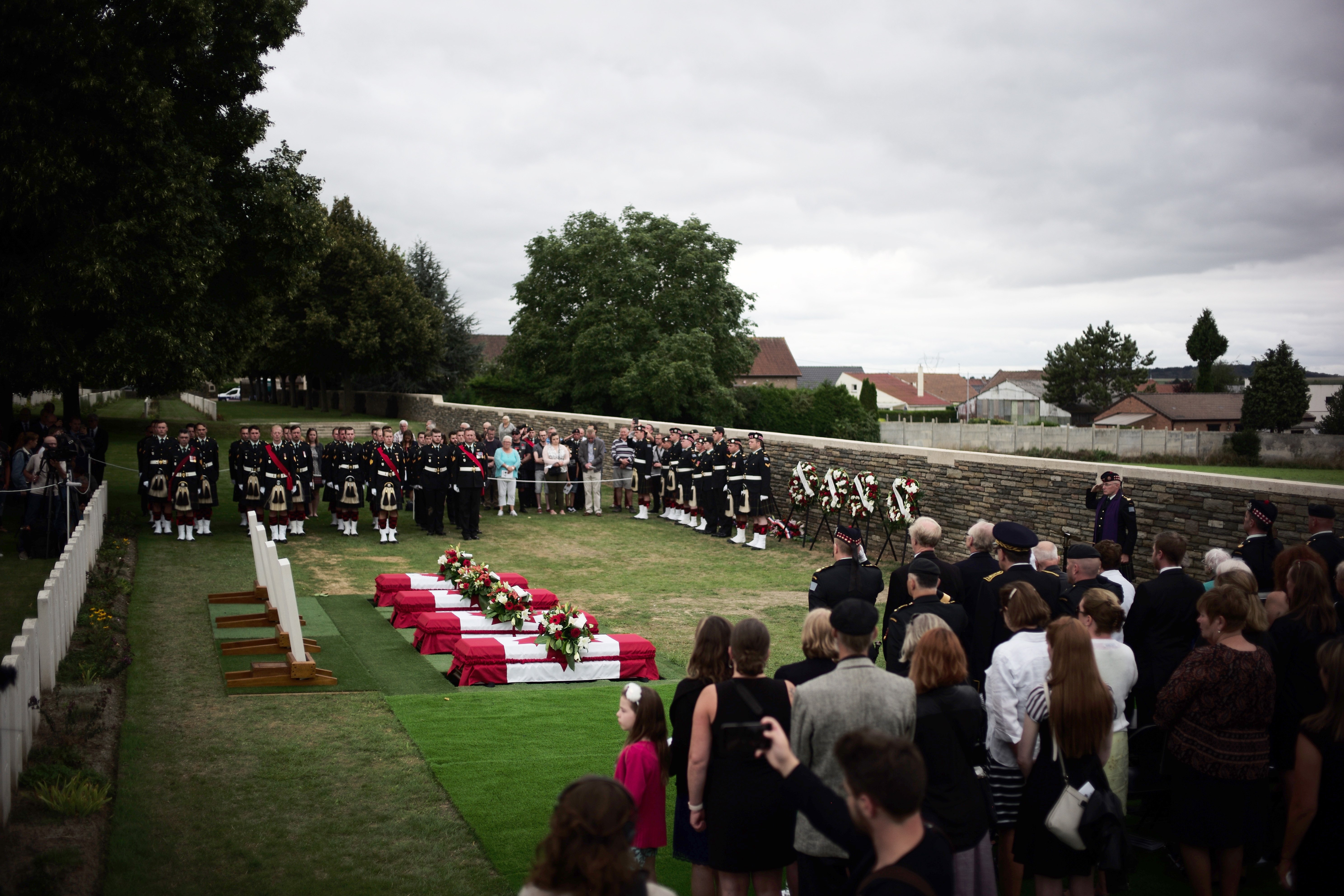 So in a grassy cemetery in France on a sunny August day, representatives from four Canadian families marched slowly behind cofﬁns carried by men in uniform, and accepted the carefully folded flags that were offered to them, and watched as soldiers buried four of their kind, and stood for the “Last Post.” All to celebrate finding dead relatives they didn’t know they had and meeting living relatives they had never seen; all through the search for a few names. Gavin and his brother, Garry, were introduced to three cousins and Garry realized he was connected to an entirely new family as well: He watched in awe as “the notoriously tough chief warrant officers,” as he calls them, got choked up at the burial for his great-uncle.

For those reasons it was a happy day, but for this one, too: “These soldiers have their names back,” Lockyer said, looking around the graves.

More than a century after four men died in the Battle of Hill 70 in August 1917, their bodies were laid to rest under tombstones carved with Bible verses and other epitaphs, but most clearly marked with just a few words.