How much does Quebec love Thomas Mulcair?

A lot, it seems. A new poll puts his NDP miles ahead. Bad news for the Tories and even worse for Trudeau's Liberals. 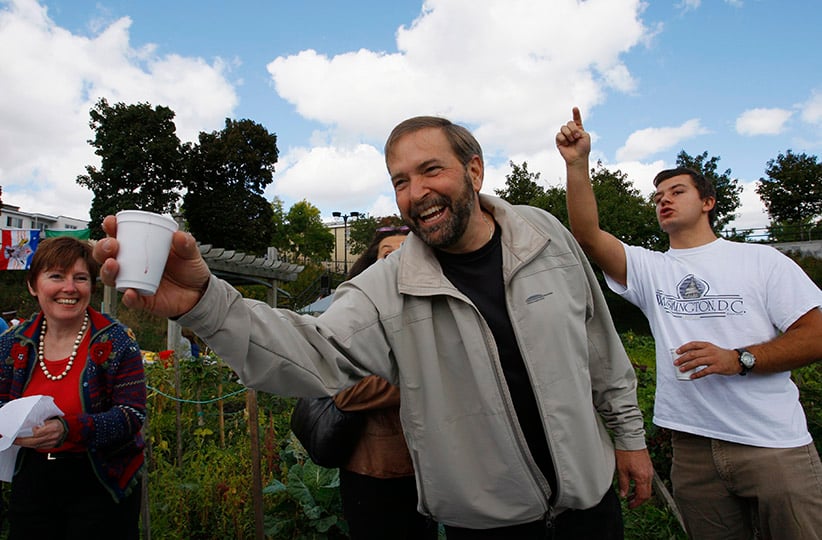 New Democratic Party (NDP) candidate Thomas Mulcair greets people at a community fair while campaigning in his riding of Outremont in Montreal, September 16, 2007. Quebec voters will go to the polls in three federal by-elections on September 17. (Shaun Best/Reuters)

The big splash today comes from La Presse, which published a poll suggesting Tom Mulcair might actually be a proper heir apparent to Jack Layton—in Quebec, anyway. Conducted by the Montreal-based firm CROP, the poll suggests Mulcair’s NDP has 47 per cent of voter support in the province—and 51 per cent of its Francophone voters support the party. To put that in perspective, that equals the party’s high-water mark in Quebec under Layton (in the rose-coloured months after the 2011 election) and four points higher than the party scored in the election itself, when the party won a breakthrough 59 seats.

Its closest rival, the Liberals, are well behind at 20 per cent, while the Bloc and the Conservatives are practically within margin of error territory at 16 and 13 per cent, respectively. This isn’t as bad for the Conservatives as it may seem. The party’s support is concentrated in the Quebec City area; previous polls actually have the CPC first in the area. Not coincidentally, the party has stocked its roster with known quantities (Alain Rayes, Gérard Deltell, Pascale Déry) in and around Quebec City and all but forsaken the island of Montreal.

It is terrible for the Bloc, however. The party’s support is relatively diffuse; in 2011, it only mustered four seats with about 25 per cent of the vote. (By comparison, the Conservatives secured five seats with just under 17 per cent.) At 16 per cent, the party may be struck from the electoral map entirely. There are boatloads of caveats, of course: the campaign period is long, Gilles Duceppe is a good campaigner, and Mulcair is a bit of a cypher when it comes to his NDP bona fides. (He loved Margaret Thatcher in 2001 and was in negotiations to join the Conservatives in 2007.) Nevertheless, it doesn’t appear that the reappearance of Gilles Duceppe as Bloc leader has had much effect on the party’s numbers. Ostensibly the voice for French Quebec for 25 years, the Bloc is actually polling equally with the lowly Liberals amongst francophones. Eek.

The poll arguably augurs worst for Justin Trudeau’s Liberals in Quebec. Some 41 per cent of Quebecers believe Mulcair would make the best prime minister, which is more than triple Trudeau’s own score. The Liberals stand at 20 per cent—a decrease of 19 points from its high point roughly a year ago, according to poll aggregator ThreeHundredEight.com. What, exactly, the issue here is can be difficult to pinpoint, because it could be a number of factors. As I wrote last year, there has been considerable upheaval within the Quebec wing of the party, with many longtime organizers unhappy with what they say is a top-down, Ontario-centric structure that stifles the party’s traditional Francophone voice.

The party also supported Bill C-51, the Conservative’s anti-terrorism legislation. Initially popular in Quebec—the Bloc Québécois considered voting for it—Bill C-51 lost its lustre in Quebec as time wore on. By March, less than two months after its first reading in Parliament, an EKOS poll suggested three out of four Quebecers were against the legislation. Finally, there is Trudeau’s pointed stand on the Clarity Act, which he brought up unprompted during the recent Maclean’s National Leaders Debate. Trudeau is dead-set against a simple majority to separate Quebec (or any province) from the rest of Canada. This has never sat well with Quebec’s intelligentsia. Perhaps it is the same for the voting hoi polloi.

With the lion’s share of its seats in the province, the NDP arguably needs Quebec the most. Trudeau needs Quebec, too, if only to buttress its anticipated gains in Ontario. Should these numbers stay stable, the Liberals can at best hope to gain on the island of Montreal and a few of its suburbs. This poll is nothing but good news for anyone wearing green and orange today.