How much spending will wildfire recovery inject into Alberta?

A new report says the years-long recovery will spur $5.3 billion in spending by the end of 2019 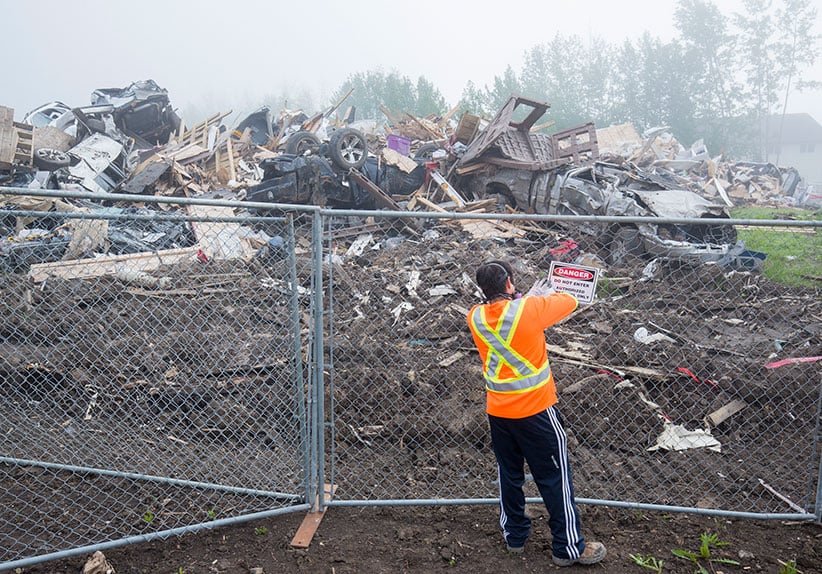 A worker hangs a danger sign on a fence next to burnt homes in the neighbourhood of Prospect Point in Fort McMurray on Thursday, June 02, 2016. (Photograph by Chris Bolin)

TORONTO — A new report says Alberta will see $5.3 billion injected into the economy through the end of 2019 from rebuilding efforts after the devastating Fort McMurray wildfire in May.

The Conference Board of Canada report says the increased spending after the country’s costliest disaster will boost the province’s GDP by 0.4 per cent or $1.1 billion next year, 0.2 per cent in 2018 and 0.1 per cent in 2019.

That’s in contrast to the 0.1 per cent or $456 million the wildfire is expected to cut from Alberta’s GDP this year, as lost oilsands production offsets increased spending elsewhere.

The ramp-up in reconstruction, needed to rebuild the close to 2,000 homes and businesses destroyed by the fire, is also expected to create about 9,000 jobs next year and cut a 0.1 percentage point off the unemployment rate.

The Conference Board says about $3.6 billion of the spending will be covered by insurance payouts, while governments will be on the hook for about $1.5 billion in firefighting, relief and rebuilding costs.

Another $200 million in spending came from early payouts from the Alberta government, the Canadian Red Cross and oilsands companies to cover immediate household needs.

The report says responsibility for covering costs of the Fort McMurray wildfire are in stark contrast to the 2013 Alberta floods, where provincial and federal governments took a $3 billion loss compared with $1.8 billion for insurers because of a general lack of flood insurance.

The Conference Board notes that while the new funding to rebuild after the fire will boost the economy, it will leave governments with more debt and the insurance industry having to cover a hefty tab.

“While rebuilding and replacing lost assets will generate economic activity, this doesn’t suggest that Canadians in general or Albertans in particular will be better off economically,” the Conference Board wrote.

The report also notes that while governments will see a boost in personal income and sales taxes, corporate income tax over the next three years will overall be lower than what the Conference Board had forecasted before the fire because of foregone revenues from oil companies.

Besides forcing the evacuation of close to 90,000 residents of the Fort McMurray area, the fire also caused major oilsands operations to shut down for lost production of 47 million barrels and $1.4 billion in potential revenue.

This year’s shortfall in oil production means Alberta will see an overall $25 million loss in royalties and a $58 million loss in corporate income tax between 2016 and 2019, while increased personal and indirect taxes will offset that for an overall $41 million increase in tax revenue.