How Naomi Klein became Canada’s only voice for angry socialism

As socialism enjoys a global moment, one voice stands out in a country that has abandoned radical challenges to the economic status quo 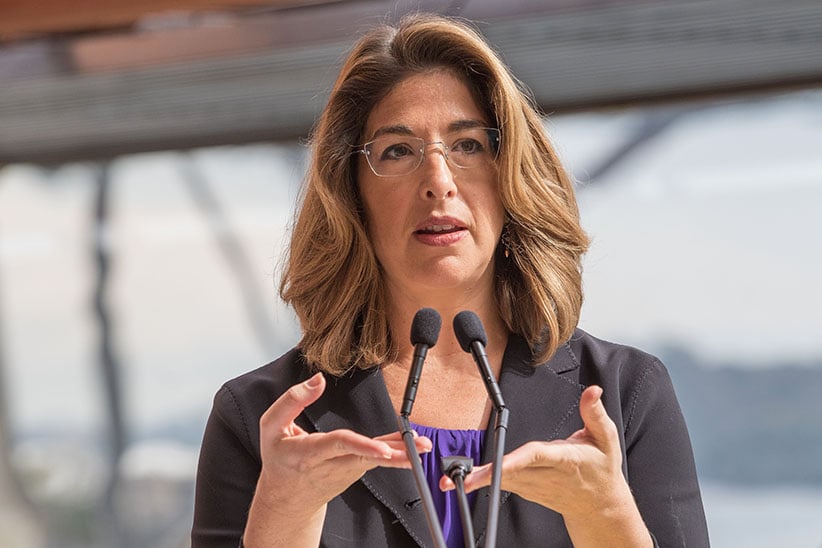 Canadian author Naomi Klein talks to the media at a press conference ahead of the seventh annual Festival of Dangerous Ideas at Sydney Opera House on September 3, 2015 in Sydney, Australia. (Cole Bennetts/Getty Images)

White-haired, blue-collar socialism is enjoying something of a moment these days. This month, perennial outsider Jeremy Corbyn, aged 66, seized control of Britain’s Labour Party, which held power as recently as 2010. Corbyn’s radical agenda includes government takeover of key industries and a host of new taxes and spending programs, including a controversial plan to turn the central bank into a source of cash for government. “Marx analyzed what was happening in quite a brilliant way,” he told the BBC of his nationalization plans. “If we are investing in infrastructure, then we, the public, should get the benefit of it.”

On this side of the Atlantic, Bernie Sanders, a self-declared socialist senator from Vermont, has been running a surprisingly successful insurgency campaign for the Democratic Party’s presidential nomination; in key states such as New Hampshire and Iowa, he’s out-polling presumptive front-runner Hillary Clinton. Sanders, aged 74, similarly distrusts business and believes deeply in the restorative powers of government. The Wall Street Journal pegs the total cost of his platform, which includes sharp increases in Social Security and Medicare, plus free tuition, at $18 trillion over 10 years, the biggest increase in public spending since the Second World War. “Are you ready for a political revolution?” his campaign website asks.

Both men have successfully harnessed a deep-seated anger toward conventional economic wisdom within their respective left-of-centre parties. After years of watering down traditional social democratic ideals to make their parties palatable to unaligned voters, an older generation of true believers is now loudly seeking to return social democracy to its militant roots. With Canada in the midst of its own bit of political mayhem, it seems reasonable to ask why this global trend has passed us by. It hasn’t. Not entirely, at any rate. In Canada, however, the angry old man of socialism goes by the name of Naomi Klein.

Last week, Klein, a well-known author and left-wing activist, released her “Leap Manifesto,” an agenda meant to reignite Canada’s socialist movement in the same manner as Corbyn and Sanders have done in their countries. While short on implementable policies, the document advocates massive increases in government control over all aspects of the economy; trade deals would be abandoned, the farm industry shifted to a “localized and ecologically based agricultural system” and alternatives found to “profit-gouging private companies.” Of note, Canada’s long-standing reliance on resource industries would be replaced by a low-carbon economy focused on “caregiving, teaching, social work, the arts and public-interest media.”

While the Leap Manifesto provides ample fodder for debate, its most significant feature is the distance that stands between it and the election platforms of Canada’s mainstream parties. Klein’s polemic has received only polite acknowledgement from NDP Leader Tom Mulcair, who’s worked assiduously to cultivate a middle-of-the road, non-threatening image for his party—the exact thing the Leap Manifesto seeks to confront—by promising balanced budgets, limited recourse to new tax revenue and a rather modest array of new promises. Justin Trudeau’s Liberals have positioned themselves to the left of the NDP this time around, yet there’s nothing in the Grit platform about abolishing capitalism or mandating smaller farms. And while both parties claim Prime Minister Stephen Harper has done a poor job of negotiating the Trans-Pacific Partnership, neither is proposing to pull the plug on this key trade deal, nor rip up NAFTA. Only the Greens under Elizabeth May offer significant alterations to the economic consensus, with a comprehensive carbon tax, free tuition and open hostility toward resource extraction.

Related: Our Q&A with Naomi Klein

Despite Klein’s best efforts, Canadian political discourse has long since abandoned any radical challenge to the economic status quo. The Leap Manifesto is the answer to a question no one is asking. Consider, for example, policy debates over poverty outside the current election campaign. The cri de coeur from activists across the country these days is a $15/hour minimum wage. While there’s much to argue over such a hike, the fact that we’re discussing wages within a market economy and not some “alternative to profit-gouging companies” or dramatic increases to welfare rates suggests the bigger debate is already over.

So why has Canada avoided the rise of angry socialism now afflicting U.S. and British politics? The reason may be found in the fact that our economy has not yet let us down. We survived the financial earthquake of the Great Recession better than most of our peers, thanks to that peculiar Canadian mix of government regulation and individual economic freedom. We seem to be surviving the oil crash in similar fashion. And for all the attention lavished on Canada’s middle class in this election, we’re not beset by any grave issues of inequality, poverty or class that might lead to social disruption. Finally, as a country born out of compromise and accommodation, perhaps extreme views of any sort are (thankfully) seen as un-Canadian.