Does coverage encourage copycats? The experts are divided. 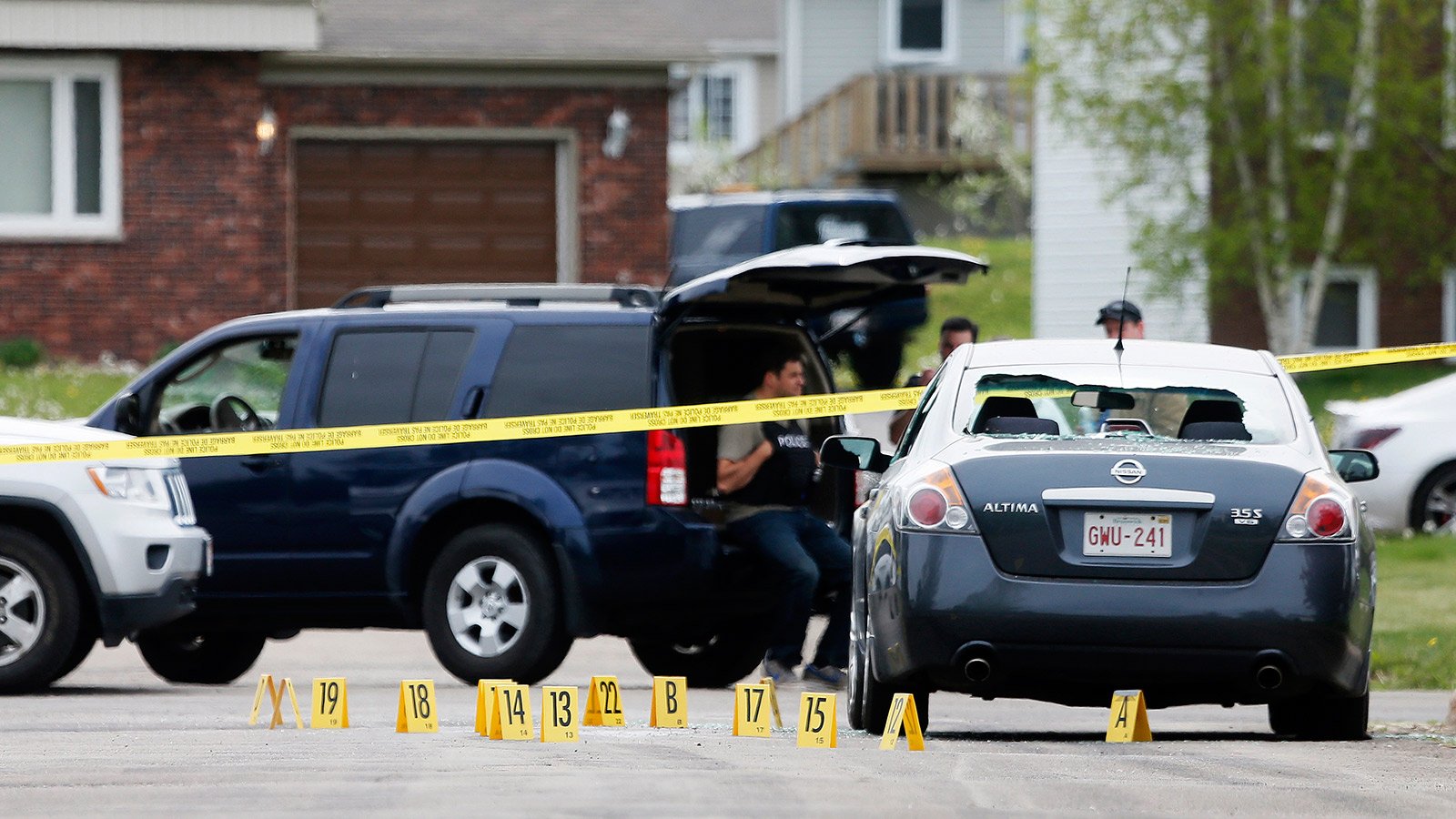 Evidence markers lie on a street at the scene of a shooting incident in Moncton, New Brunswick on June 5, 2014. (Christinne Muschi/Reuters)

In the hours after news broke that five RCMP officers had been shot in Moncton, N.B., three of them fatally, police released a photo of their suspect. That image of 24-year-old Justin Bourque, a man dressed in camouflage, with a rifle in his right hand and a shotgun slung over his back, became ubiquitous in media coverage, splashed on front pages, shared on social media and flashed on 24-hour news channels. This week, the image is on the cover of Maclean’s, alongside photos of the three fallen officers.

In the days following Bourque’s arrest, the desire to explain, to try to make sense of this horrific and seemingly nonsensical crime, is understandable. But as coverage of the Moncton shootings continues, there has been plenty of debate over how much coverage is too much. In this shooting, or other highly publicized mass shootings before it, there is fear that too much focus on the suspect runs the risk of somehow validating such behaviour, or encouraging copycats. But does media coverage of mass shootings, or other horrific crimes, actually cause copycat behaviour? Research on the topic is divided.

When it comes to suicides that don’t also involve a homicide, there is evidence that media coverage very likely encourages more suicides, writes Durham University anthropology professor Alex Mesoudi in a paper published in the International Human Press. He cites a study examining a rash of suicides by subway jumpers in Vienna in the 1980s. When guidelines were introduced to limit coverage, the suicides dropped off. Other studies suggest a correlation between highly publicized celebrity suicides and suicide in the general population. Media are aware of this correlation. It’s one of the reasons suicides are rarely covered by the media and, when they are reported, are handled with great care.

When it comes to mass killings, it’s impossible to draw the same direct links. The reason is that, statistically speaking, mass shootings are very rare—even though they get a disproportionate amount of media coverage. All that researchers can rely on when studying correlations between mass shooting and media coverage is anecdotal evidence.

Anecdotal evidence is enough for Park Dietz, an American forensic psychiatrist who is frequently called to testify in high-profile criminal cases. (He’s testified at the trials of Jeffrey Dahmer and “Unabomber” Ted Kaczynski, among others.) “There have been too many occasions where I’ve said, ‘If they keep up this news for another 24 hours, we’ll have another mass murder within two weeks.’ And I’ve been right every time I’ve said it,” says Dietz.

There are three ingredients needed to prompt a multi-victim crime, Dietz says. First, the perpetrator must be depressed and willing to die. Next, he must be very angry and blaming others. Third, there must be a stimulus to act on that day. In some cases, sensationalized coverage of a similar crime can push a disturbed person over the edge.

Dietz has plenty of ideas about how the media can do better in their coverage of mass killings—not that researchers are in agreement on this. One of his main points is to avoid making the suspect an anti-hero. “That means no photos of the shooter looking cool, powerful or attractive,” he says. Photos such as the one circulating of Bourque dressed in his military-style gear should be removed after police apprehend their suspect, he suggests. And they should never appear on covers of magazines or newspapers.

After Bourque was apprehended on June 5, Sun News Network decided not to use the suspect’s name, or to publish his photo. “When it comes to mass murderers, too often, it is attention and infamy they crave,” Sun News wrote in an editorial. It goes on to say: “We will not help give this killer his blaze of glory.”

Elliott Leyton, a professor emeritus at Memorial University who has spent much of his career studying multiple murders, says it’s a wonderful decision. “I’ve been asking people to do that for 30 years.”

But was Bourque looking for a “blaze of glory?” This week’s Maclean’s cover story contains no evidence to suggest the shooting in Moncton was motivated by any copycat behaviour, or by any desire for publicity. Though the suspect posted anti-police and anti-authority messages on his Facebook account prior to the shootings, he did not mention other mass shootings.

Furthermore, not every criminal expert agrees that removing a suspect’s name and image from the public domain after arrest is the best practice. “Is every media outlet going to adopt that policy? People like Charles Manson or Paul Bernardo, they’re known for the horrific nature of the crimes they’ve committed,” says Neil Boyd, the director of the school of criminology at Simon Fraser University. “Can we imagine a future in which we talk about a particularly heinous crime, a particularly horrible set of killings, and we don’t mention who was responsible?”

While Boyd says there may be merit in diminishing coverage of the suspect, part of our collective understanding of a tragic crime comes from understanding the motives. “The public has a desire, and it’s a reasonable desire, to know the how and the why,” says Boyd.

In the days and months ahead, once the answers to how and why become more clear, Bruce Shapiro, executive director at the Dart Center for Journalism and Trauma at Columbia University, says the coverage should continue, but it needs to shift. “We have a responsibility to cover these events in the longer term,” Shapiro says. “The story doesn’t end when the suspect is arrested. The story doesn’t end when the verdict is announced at a trial. For the survivors, the victims, it’s going to continue to play out, and we should continue to cover the people whose story it is.”

The families of the fallen, the family of the suspect, and the community of Moncton will live with the consequences of this tragic event, long after Justin Bourque’s name fades from headlines.