How the B.C. Speaker should manage a messy House 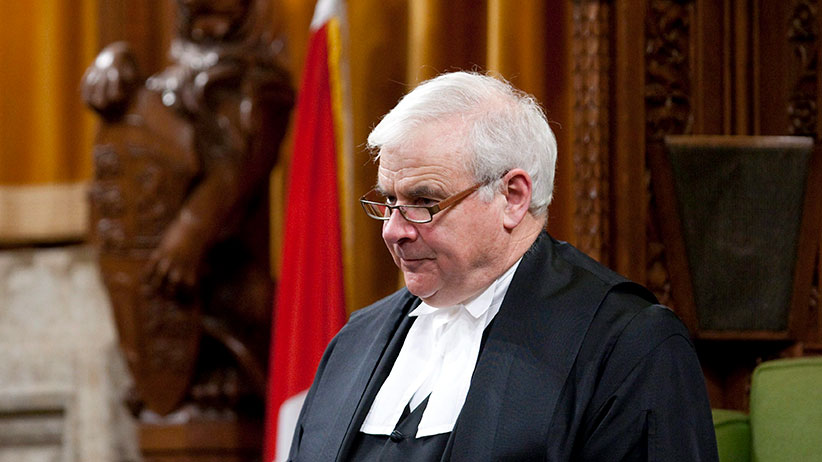 Peter Milliken in the Commons in 2011 (Sean Kilpatrick/CP)

The brinksmanship, procedural wrangling and finger-pointing in Victoria begins on Thursday, when the B.C. legislature convenes for the first time since the May election that created a lame-duck Liberal government of 43 seats, and a loose alliance of 41 New Democrat MLAs and three Greens, who are poised to assume power shortly.

Much of the hijinx will ensue around the Speaker’s chair. The Christy Clark Liberals appear unwilling to let one of their members serve as legislature referee under an NDP government, meaning a governing member would have to step up, creating a 43-43 assembly deadlock and constant tie-breaker votes from the Speaker. By custom, the Speaker votes to preserve status quo and continue debate–but there’s no hard-and-fast rule, and customs are prone to be broken by a Speaker who’s still loyal to her or his party. A snap election may result, depending on how a Speaker votes on matters of confidence. It’s almost guaranteed to be a mess.

Peter Milliken knows a bit about messes. The former Liberal MP was House of Commons’ longest-serving Speaker, from 2001 to 2011–a period spanning the minority governments of Liberal Paul Martin and Conservative Stephen Harper. He cast five of the 10 tie-breaking votes in Canadian history–sometimes voting with his party, sometimes against it and once, in 2005, to save the Martin government from collapse. But that doesn’t mean he would refuse to topple a governing party under the right circumstances; nor does it mean he’d leap at the chance to preside over a 43-43 split legislature.

Maclean’s caught up with the retired politician over the phone from eastern Ontario.

Q: When the Conservatives were elected and formed a minority government, was there party pressure on you from the Liberals not to become Speaker, and make Conservatives take one?

A: Certainly not. It didn’t matter to me who the government was. The Speaker’s neutral. There were lots of Conservatives running for the job, but they got knocked out of it. They obviously had some of the people voting for me. My impression was a lot of the cabinet ministers were supporting me because they perceived me as being fair.

Q: Did you feel differently serving as a Speaker when the opposite party was in government?

A: I didn’t have particular concerns, because you’re sitting there being neutral. You don’t have views on stuff, and couldn’t express them. You work with whoever’s there.

RELATED: Why the B.C. Liberals should suck it up and offer a Speaker

Q: There are conventions and customs, but there’s no code on the art of casting tie-breaker votes. How did you go about it?

A: The clerks could give me advice if I wanted it on what Speakers had done in the past. But normally it was to maintain the status quo.

One time there was a vote on a Conservative private member’s bill that increased prison sentences for a whole bunch of offences. It’s something I’d always opposed when I was able to speak in the house. This tie vote occurred in second reading, and I stood up and said I’m voting in favour of the motion to allow for further debate on this bill. It’s not being passed; it’s simply being advanced to the next stage. I got a standing ovation from the Conservatives, and looks of shock and horror from the Liberals that I had done it this way.

After the vote was over and a lot of the members had left, I leaned over to the Conservatives sitting at their desks near the Speaker’s chair. I said: ‘You know guys, this is a great precedent.’ They said: ‘Oh yes, Mr. Speaker! Great precedent! Well done!’ They flipped me their thumbs up and smiled. I said if there’s a tie vote next week at government budget bill at second reading, you know exactly how I’m going to vote. They were shocked and horrified and went running out to tell their whip. And sure enough, there was a tie vote at second reading on the budget bill, and I voted in favour. There was no applause from anybody. It saved the government from defeat.

I was just being consistent in voting.

Q: Should a Speaker always vote to preserve the government when it comes to a tie vote on a matter of confidence?

A: I don’t think it’s necessary to do that. I don’t know what I would have done if I had to vote on third reading of that (2005) budget bill: do I vote for changes in the law, or do I vote for the status quo? And is the status quo keeping the government in, or is it keeping the law as it is? What’s the Speaker supposed to do? If we researched it at the time, I don’t remember.

Q: Interesting. So there is an inherent conflict in third reading of a budget bill.

A: The argument would be you’ve got to support the government so you’ve got to put it through. But my impression was at third reading on most things you vote against, because you’re voting for the status quo.

A: Difficult, because you’d have so many tie votes and so many arguments on procedural matters that are designed to embarrass the other side. It’s not something that can’t be done; it would just keep you busy. The hitch in the legislature with the numbers there, with the Speaker casting so many deciding votes—the numbers are so close, it will be tricky. Have one or two members absent, and you’re in trouble.

RELATED: Why B.C. should just hold another election—right away

Q: Is it tricky to the point of being untenable?

A: It might render the Speaker untenable to other members. If they all get annoyed at him for voting a particular way. All of them won’t, but some of them will. It’s going to make it a little tough for him to hang on to office–they’ll say let’s get him out of here. And they’d try to vote him out, which isn’t nice. Sometimes you make these rulings that make everybody reasonably happy, and sometimes not. It’s something fairly difficult to figure out every day.

Q: In B.C., it sounds like the Liberals will put up a Speaker for their throne speech, so there would be no tie in voting [on the speech] and the Liberal government would fall. But afterwards, that Speaker would resign, requiring the NDP and Greens to put up a Speaker. For the sake of avoiding this 43-43 razor’s edge, should someone on the Liberal side take one for the greater good and stand as Speaker, to limit the likelihood of a constantly fraught situation?

A: The Speaker can resign at any time. It’s too bad if that’s the case, but the Speaker has to make his decisions on his own. If he chooses to resign, that’s his business.

I don’t think the party should be the one dictating who the Speaker is. The members who want to run for it should run. It’s fine for the party to urge members not to run, but some of them should just say I’m running anyway because we need to have a Speaker and I want the house to have the option as to who is the right candidate.

Members in my view should be able to exercise judgment on their own. Yes, you have whips that tell them they want you to vote for a certain bill, but technically the member can still exercise his discretion. Control by the whips over what members say and their participation in committees is inappropriate, and in my view it’s happening way too much already in the House of Commons. It’s gotten a little more slack since I was there, but when I was there the control was excessive. The whips told them what the question in Question Period would be; they couldn’t make up their own questions. I didn’t think it was the way members should be treated, or the way they should represent their constituents.

Q: Is there institutional risk in having a partisan Speaker? You’re somebody who seems they really cherished the office and the impartiality of it.

A: It’s a risk that is there. It depends on what ways it’s made manifest. It depends how they act in the chair. Part of it is making sure you’re fair, and part of it is playing the games and rolling with the arguments people are making. If your decisions are consistent with practice, and you can cite precedence for what you’re doing, it really makes it a lot easier. Even if they don’t like the decision, they’ll accept that’s the way it has to be.