The plan—envisioned as an off-road greenway spanning the country—has encountered everything from financial realities to local routing disputes. 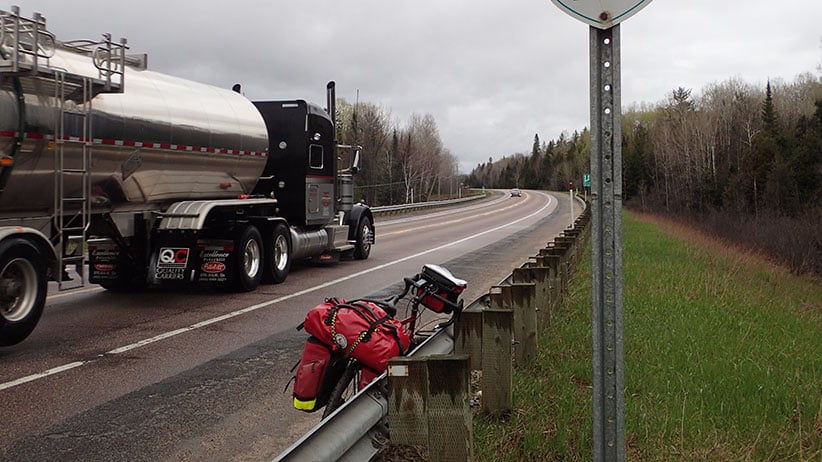 To help celebrate what Trans Canada Trail organizers hailed as a big milestone, there was a scavenger hunt in Olds, Alta. A ribbon- and cake-cutting in Kenora, Ont. Family supper in Saint-Barnabé, Que. And a big concert in downtown Ottawa, with Governor General David Johnston hosting and former Barenaked Lady Steven Page singing about his old apartment.

Dozens of local parties dotted Canada to celebrate the coast-to-coast “connection” of the Great Trail, a recreation ribbon that stretches 24,000 kilometres. There was no Last Spike moment to mark this occasion, TCT officials say. Rather, the finishing touches would have more likely been by somebody at a desk, using keystrokes and mouse clicks to mark green lines over highways, and blue squiggles over rivers and lake shorelines, oft-paddled or not.

The cake- and Steven Page-worthy accomplishment was only achieved through some before-the-deadline replacements of various gaps with “interim” trail routes that may never actually get trail signposts, and where nobody may want to encourage people to cycle or hike, most notably on the narrow highway shoulders that temporarily count as much of Alberta’s contribution to this national project. The trail has been fully connected but it is not completed, something that gets mentioned occasionally on the trail foundation’s website, though the distinction was missed by myriad local news accounts promoting the moment.

The national trail project initially launched in 1992, with a dream of finishing the trail in 2000. About a decade ago, the country’s 150th birthday was re-established as the new goal, and, somehow, the organization was determined to make it.

For much of the designated Great Trail between Edmonton and Calgary, the link is Highway 2A. It’s the narrow-shouldered secondary road between Alberta’s two metropolises, ranging from two lanes to four lanes, with more than 8,000 cars and trucks counted daily on some of the sections designated as trail. No signs designate this as part of the national recreation route, and the province has no plans to erect any.

This wasn’t at all how the dream was conceived. A quarter-century ago, the project founders envisioned off-road greenways spanning the country, largely using abandoned rail beds to link existing trail networks. “I don’t think there was a really good understanding of the difficulty in building it,” says Lori Spence, TCT’s chief operating officer. But like the Canadian Pacific Railway forged more than a century ago, the dreamers encountered everything from tricky terrain to financial realities and local political disputes over routing. These trail-blazers could ultimately be more creative than yesteryear’s rail-blazers: instead of a pathway along the Lake Superior shore, they designated the lake itself as part of the trail. Near the start of this century, they agreed to include active gravel and paved roads as legitimate connections as well, with one-day wishes to replace them.

Only 7,898 kilometres of the trail are actual off-road trails, or 32 per cent. More of it, 8,593 kilometres, are automobile roads, while 6,073 clicks of the stretch are waterways and the remaining 1,793 kilometres are hybrid trails that also permit all-terrain vehicles.

The foundation has tasked provincial trail associations with completing or connecting the line, and some of them have readily included popular roadside and highwayside cycling routes, such as Quebec’s Route verte. Ontario’s recently completed Lake Huron North Channel Waterfront Trail, led by the Waterfront Regeneration Trust, was crafted to minimize use of Trans-Canada Highway shoulders; 50 kilometres worth.

But with gaps remaining as 2017 approached, TCT representatives fanned out to local municipalities last year, hoping to find interim solutions. Around the Township of Ramara, Ont., a 24-kilometre gap existed, where county policies and politicians were unwelcoming to pedestrians and cyclists on rural roads. Enter Jim Paterson, trail coordinator.

“Mr. Paterson proposed an excellent solution to avoid the embarrassment of not completing the trail by next July,” the Orillia Packet and Times wrote in December. The edge of Lake Simcoe would become a paddling route, a map placeholder. “This would satisfy the appearance of a completed trail route for next year without a great cost.”

Alberta, that great land of rugged individualism and nature-lovers, has long been ground zero for resistance to the Trans Canada Trail. Resident groups formed to oppose routes in the plan’s early years, in part because some adjacent landowners wanted those abandoned rail beds for themselves, and certainly didn’t want tourists and expeditioners roaming about. “When this project was first conceived, everybody thought of this as motherhood, apple pie–everybody will want and love trails,” says Linda Strong-Watson, longtime director of Alberta TrailNet. Alas. Her group has made significant additions to the Trans Canada Trail, but as of last year, Alberta was the least connected province, more than one-third of the route still missing.

TCT’s Kristen Gabora toured Alberta county councils, urging them of the fitness and tourism benefits if they designated local roads part of the Great Trail. Some have bought in, while others didn’t want the burden. “We didn’t think the residents would want all the extra traffic riding down all the roads,” says Patricia McKean, councillor for Mountain View County north of Calgary. Unable to use municipal range roads in many areas, TCT could only designate provincial roads like Highway 2A.

“It’s the straighter line on the map,” Gabora says, stressing it’s an interim route. “People are encouraged to always choose the safest routes for themselves.”

Spence, the COO, insists planning wasn’t so last-second: “We were not doing anything quickly or hastily just to reach a goal. We were deliberately identifying good cycling routes.” Alberta TrailNet’s leader isn’t so ready to embrace the markings. “We don’t consider on-road alignments as trails, number one,” Strong-Watson says.

Edmund Aunger, a retired academic, has been biking the length of the route, decrying to politicians, trailmakers and media how far the trail has slipped from the original, off-road dream. It’s an emotional mission for him: his wife, an early TCT supporter, was killed by a drunk driver while cycling. He’s fond of recalling that TCT co-founder Bill Pratt was also motivated when he witnessed the carnage of a vehicle-cyclist collision. Aunger doesn’t believe the Great Trail is worthy of either word of its name.

The announcement of coast-to-coast connection may fool some tourists, he says. “It’s only going to attract people who believe the image that’s presented, and the propaganda, and their interactive map and app,” Aunger says.

The organization isn’t declaring mission accomplished, and continues to fundraise and advocate for actual completion of the trail. Spence says the TCT philosophy differs from the trails-only idea Aunger advocates: by adding these interim routes and road links on the map, it lets organizers pressure governments to make those sections safer. She notes the Ontario government has included those Huron Trail sections of the Trans Canada Highway as part of its provincial cycling network, and will upgrade those shoulders. But on Alberta’s Highway 2A, the provincial government’s only role in the matter will be to help trail groups and municipalities find better, safer routes. “That was a TCT decision,” provincial spokesman Ryan O’Byrne says of route planning.

Despite the imagery conjured up in Great Trail promotions, be under no illusion that this is anything like the Appalachian Trail, or the Camino de Santiago pilgrimage through Spain. One cannot hike the full length of the Trans Canada Trail, nor bike it, nor paddle it. One must do all three to traverse all those kilometres. And mind the truck traffic.