How this Indigenous community enjoyed a rare caribou feast

A hunting ban meant it had been years since residents of Nain had tasted caribou meat, which had once sustained them for centuries. An avalanche and one man's vision changed that. 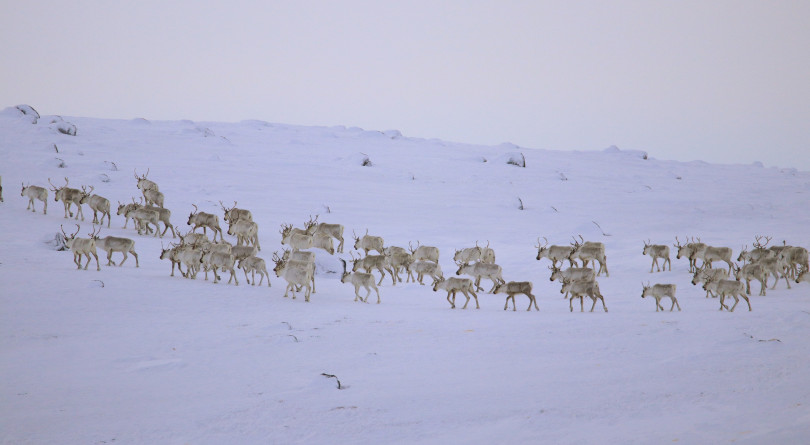 The George River caribou herd was almost 800,000 strong in the ’90s; it has now shrunk to fewer than 5,500 (David Borish/Nunatsiavut Government/NunatuKavut Community Council/Torngat Secretariat)

It was a winter of heavy snowfall along some parts of the northern coast of Labrador. Strata of white stuff kept thickening under leaden skies, to the point that it reached halfway up the window of Simon Kohlmeister’s ofﬁce, ﬁve metres from the ground.

It was here, in the Inuit government ofﬁces in the northernmost settlement of Nain, where Kohlmeister got a call from a partridge hunter on Valentine’s Day. It was late afternoon and the hunter had spotted a caribou, dead in the snow on Rhodes Island, a 15-minute snowmobile ride from town. The animal, a female, lay on her back, half buried with her hind legs splayed and nose to the sky. She looked to have been killed by an avalanche, the hunter told Kohlmeister, a conservation ofﬁcer for the Nunatsiavut government.

Avalanches are common on the north coast of Labrador, especially in the hills around Nain. This winter brought more of them than usual, according to Paul Fenton, an avalanche technician with 22 years of experience in the area. The snow in February had been relentless—nearly a metre over the month, which is almost double the norm. But in the aftermath of this slide, Kohlmeister saw the makings of an event that might be remembered in town for years to come.

Once the main sustenance and lifeblood of Indigenous people in the north, caribou are now classified by the federal government as threatened and may soon be considered at-risk. In the early 1990s, there were roughly 800,000 George River caribou; the herd has now shrunk to fewer than 5,500. Since 2013, the Newfoundland and Labrador government has banned caribou hunting. And while the Innu Nation has not recognized the ban, taking a reported 100 animals in 2017, most people within Nunatsiavut, a self-governing area in Labrador, are abiding by it. As a result, it’s been years since residents of Nain, a community of 1,100, have tasted meat from the animal that for centuries sustained them and lay at the centre of their cultural traditions. Some children have never eaten it at all.

For this reason, it was decided there would be a caribou feast.

The morning after Valentine’s Day, Kohlmeister ﬁred up his work snowmobile and drove across the ice to Rhodes Island to have a look for himself. There he found the animal, freshly killed and chilling in the snow, along with a curious-looking hole—dug by a fox, he surmised. And there, a metre below the surface, was a second dead caribou.

In his 61 years as an Inuit man in northern Labrador, Kohlmeister had never seen anything like it. He put a call in to his boss: could he take the caribou carcasses to the community freezer, which is a kind of food bank of country food for people in some northern Labrador communities? Later that day, he got the permit. The caribou could be used for a community feast.

The following morning, he and a buddy drove out to the site with shovels and a komatik, a four-metre wooden sled to carry the carcasses. When they pulled up in the centre of the town, there was no one around who knew how to butcher a caribou. So Kohlmeister went home and returned with a knife. He skinned the caribou ﬁrst, cutting from the chest down, the way his father had taught him. The hides, bruised and torn from the avalanche, weren’t worth saving. “I just start butchering it the way the women would want them, ready for cooking,” said Kohlmeister. “After it was ﬁnished, it was like, ‘Hooray, we’re gonna feed people.’ ”

READ: To kill a polar bear

He’d eaten caribou for most of his life—cooked, fried, baked, stewed. But frozen raw has always been his favourite. “For me as an Inuk, I’d rather have it frozen. It’s not so soft as ice cream but it tastes as good as ice cream.”

On the day of the feast, March 8, a ﬁerce blizzard blew in as volunteers bustled to prepare the caribou soup and roast caribou with salads. Word had spread on Facebook, and Elizabeth Ittulak, a 71-year-old widow, was excited. Her brothers used to hunt caribou when she was a girl living in Hebron, a now abandoned settlement 200 km north. They used dogsled teams to go deep into the hills for the food that she describes as “the best kind.” Her husband, who died in 1992, also hunted caribou when they were so plentiful that the teeming hills appeared to be moving.

Afterward, the leftovers were dropped off to those who couldn’t make it out. A bowl of stew was dropped off to Kohlmeister, who relished every bite. “It was something you want to tell the whole world about—how good it tastes to be able to have a small piece in your mouth again,” he says.

He hopes the herds will replenish so his children and six grandkids can learn to hunt, preserve, cook, make clothes and tools with the caribou.

But for now, the day of the caribou feast stands as a rare treat in the midst of an epic winter and a seven-year stretch of deprivation—spiritual, if not nutritional. For days afterwards, people stopped Kohlmeister in town to thank him. “People said, ‘I feel stronger. My soul feels like it’s going to live forever.’ ”

This article appears in print in the June 2019 issue of Maclean’s magazine with the headline, “Cooked but still rare.” Subscribe to the monthly print magazine here.