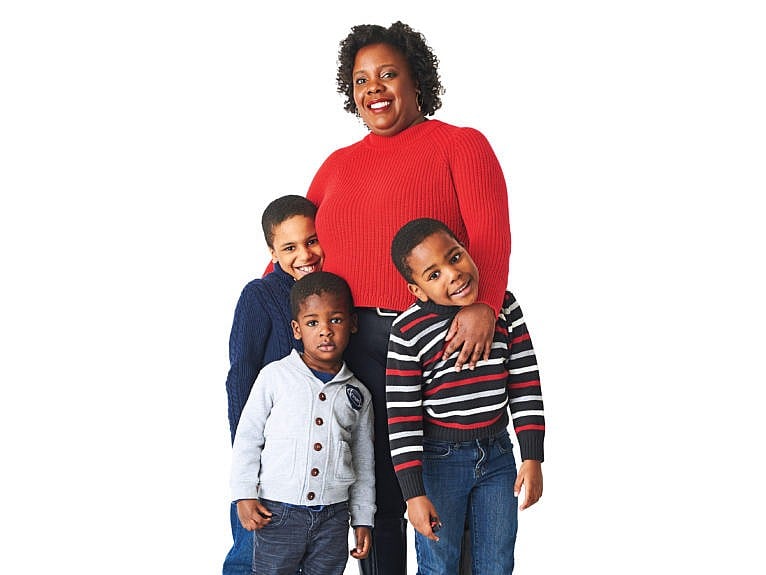 Natalie Donaldson. This portrait was taken in accordance with public health recommendations, taking all necessary steps to protect participants from COVID-19. (Photograph by Dmitri Aspinall)

As concern over the coronavirus ratcheted up last spring, so did Natalie Donaldson’s anxiety. “I quickly realized the kids were picking up on it, and it was making them anxious,” says the single mom of three who lives in Toronto.

As someone who works in social services, she decided to follow the advice she often gives others: focus on what you can control. The first thing she did was limit her news consumption—the 24-7 loop of the same information wasn’t helping her mental health. The next challenge was making decisions about her job at a community agency where she is a coordinator supporting children with autism. In the spring, she was redeployed to the residential program, which meant she couldn’t just switch to working from home. And as the sole breadwinner, she couldn’t leave her job to be at home with her kids.

Eight-year-old Isaiah and five-year-old Joshua were in school, which had shifted online; Donaldson’s youngest, Eli, is two. She decided to work evening shifts so she could be at home with her boys during the day, with her mother taking over their care in the evenings when Donaldson went to work. She also decided to focus on other income streams so she wasn’t reliant on her day job. She’s a licensed life insurance agent and met with clients over Zoom when she wasn’t at her main job, and in July she started working with Instacart occasionally. By the summer, she was burnt out.

The absence of her family’s typically vibrant social life was also taking a toll. Outside of work, Donaldson was only seeing her mother to keep the risk of infection at a minimum, and the same went for her kids except for one excursion to Niagara Falls, Ont., with their cousins. When things got tough, she spoke to a counsellor. “It’s a huge part of my self-care—especially as a single parent—being able to talk through scenarios that maybe other people talk through with other members of the household or their partner,” says Donaldson. “I don’t have that luxury.”

By August, some relief came. Donaldson returned to her regular role and support sessions moved online, so she was able to work from home. In September, Donaldson sent her two older boys to school in person and resumed home care for the little one. That helped create a familiar routine for a few months—getting everyone dressed in the morning and heading out the door.

Like most other families, their Christmas looked different. Donaldson usually spends the holiday with a family friend, but this year they stayed home. She worked hard to fill her table with all the fixings—turkey, macaroni pie, cheesecake—to mark the occasion for her kids.

Now Donaldson is trying to focus on what her family can do, rather than what they’re limited by. But she is hopeful for a future where the virus won’t loom as large. “I’m looking forward to a barbecue in the park, where the kids can run around, music is playing, everybody is safe,” she says.