How to destroy a lake without causing an uproar

A gold mine expansion in northern Ontario will turn a small lake into a tailings pond. For many in the area, it's a win-win. 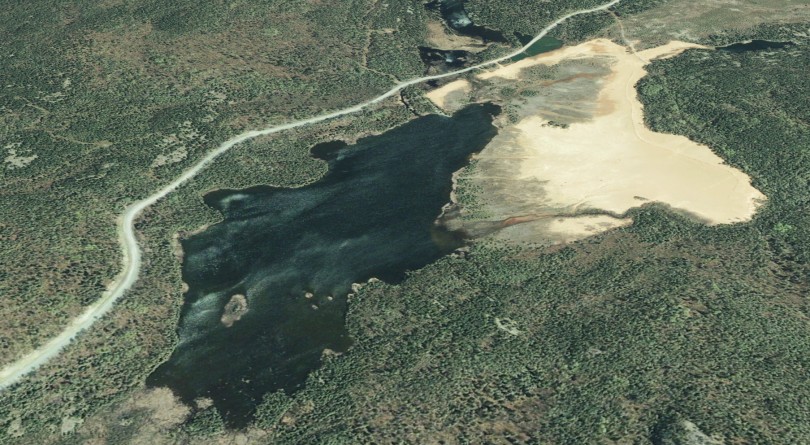 A mining company in northern Ontario wants to expand a gold mine, “destroy” a lake—that’s Environment Canada’s word—where small fish take up residence, and do it all on land that straddles the traditional territory of two First Nations.

That may sound like a recipe for disaster given the litany of resource-based disputes between Indigenous communities, environmental groups and companies that want to rip stuff out of the ground. But that’s not the story at Davidson Lake, where Alamos Gold Inc. and just about everyone who might cause a stink are happy to see the Young-Davidson mine expand—and the lake, which covers more than 200,000 sq. m, transform into a tailings pond.

The Young-Davidson mine is less than an hour’s drive from Kirkland Lake, a town not far from the Quebec border that’s been surrounded by gold mines for more than a century. Alamos opened the underground project in 2012, and over time discovered much larger gold deposits that could extend the facility’s life for upwards of 20 years. That meant expanding it andfinding a new “tailings impoundment area”—a nearby body of water that could handle the sand-sized pieces of waste leftover from the mining process, which splits gold from all the other materials carved out of the ground. A secure tailings pond is needed to stop potentially harmful waste from leaking into surrounding ecosystems.

The company tapped Davidson Lake, which was already a recovering tailings pond from a previous mine that shuttered in 1956. It hopes to start construction on the expansion early next year.

Three companies have run the current mining project since its earliest development in the mid-2000s, each absorbing the last: first Northgate, then AuRico and now Alamos. Peter MacPhail, Alamos’s chief operating officer, has been part of the operation since the Northgate days. MacPhail says the company took local consultation seriously, meeting with both the town of Matachewan and the First Nation of the same name before it bought any property. “We started off, even when this was an exploration project, having an open dialogue with the communities,” he says. “It hasn’t always been rosy, but by and large, we get together and move forward.”

The gesture paid off. Jason Batise is the executive director of the Wabun Tribal Council, which serves five nations, including Matachewan. He was in on those first meetings and said they came at a disruptive time in the relationship between mining companies in Canada and Indigenous people on their traditional territory. The meetings, he says, involved “not only talking about the environment but also trying to include the communities economically in a real way.”

What followed was several years of negotiating an impacts-and-benefits agreement. “We have our wants and needs. The mine has wants and needs, including making the business work. Nobody goes into business to lose money,” says Batise. “There were some good days and some hard days. Often, our interests didn’t align. But you find a way to make it work.” Matachewan wanted a piece of the financial pie, assurance that the company met local environmental needs and also a say in how the mine was run. That included local elders offering their wisdom, and traditional culture informing the project’s development.

RELATED: What you need to know about tailings ponds

Alamos is compensating for the reopened tailings pond by committing to a detailed fish-habitat-conservation plan, developed based on input from Matachewan and Temagami First Nations, a fish hatchery in Temagami, Ont., and the provincial natural resources department. The company will move fish out of Davidson Lake with the help of Indigenous partners, a process the company says could involve a series of traps and holding tubs; it will also develop a 3.72-hectare baitfish habitat along nearby Davidson Creek; enhance four walleye spawning areas in the region; and fund research on “environmental DNA metabarcoding,” which will help identify fish populations.

MacPhail says there’s a lot economically in a 20-year project for people who live nearby. Towns like Kirkland Lake and Matachewan, as well as Indigenous communities, are “highly dependent on resource development” to a degree alien to most Canadians living in big cities to the south, he says. “The livelihoods of these communities depend on these mining operations. It’s our responsibility to make sure they’re run properly, they’re environmentally sensitive. But this whole issue of sustainability has an awful lot to do with having these mines operate over a long period of time.”

Batise didn’t disclose the financial terms of the impacts-and-benefits agreement, calling it a “not insignificant” sum. Federal filings show Alamos made payments of several hundred thousand dollars to Ontario First Nations in 2017. Batise said the money is crucial for funding housing, education and health services for local First Nations. “They’re becoming happier and healthier places,” he says. “It’s taking us from a position of poverty to—I wouldn’t say affluence yet, but we’re at a place where we’re not going out and begging government for things all the time. There’s a way now that the community can fund its own priorities.”

A small Ontario lake will soon be destroyed and made inhospitable to living creatures—but all, happily, in the name of progress for anyone who needs gold, and for locals who seek prosperity.