How to get the cops out of your Pride parade

Pride groups in Calgary and other western cities are talking their police out of marching in uniform. The keys appear to be discretion and tact. 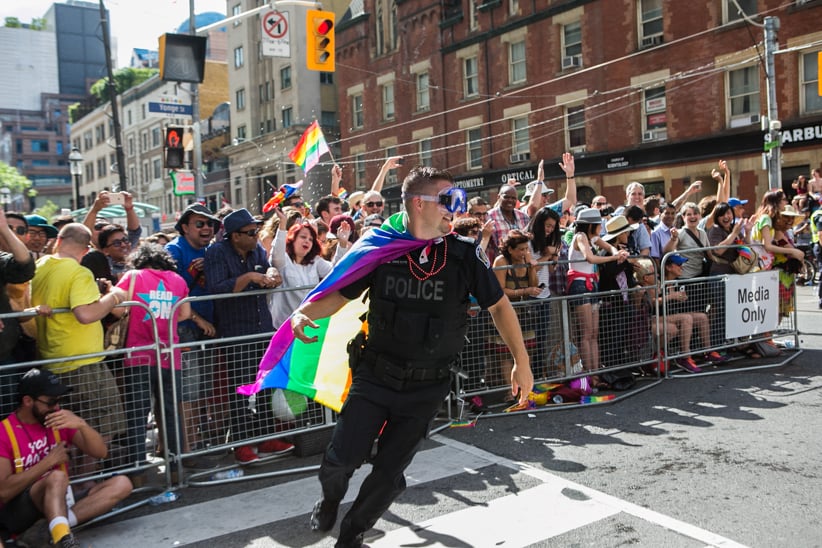 Scenes like this one from Toronto’s 2016  Pride parade are increasingly rare.

A Calgary Pride news release Wednesday seemed to be setting off what, this year, is a familiar pattern in some Canadian cities: Pride leadership agrees with LGBTQ activists of colour and Indigenous roots, and ban local police from marching in the annual Pride parade; then the police chief and politicians push back, and the officers’ union howls in protest, and a testy political-cultural spat ensues for weeks or even months.

In Toronto, Chief Mark Saunders decided the police department would officially steer clear of the parade, after Toronto Pride’s board agreed with some of Black Lives Matter’s demands to minimize the visibility of the police because of a long history of abuse and harassment of marginalized groups; Toronto officers instead marched in uniform in the New York City parade. In Ottawa, Chief Charles Bordeleau intends to personally defy Capital Pride wishes and march next month in uniform. In both Ontario cities, councillors mused about pulling civic funding for Pride if uniformed officers weren’t welcomed.

Yet in Calgary, any such impasse lasted only a few hours—the span between Pride’s morning news release and Chief Roger Chaffin‘s in the afternoon.

“We are obviously disappointed with the decision that police will not be allowed to march in uniform, but we are not going to allow it to undo decades of progress between law enforcement and the LGBTQ community in Calgary,” Chaffin said in his statement. Calgary police will march, but not in uniform. The relationship between the institution and the community matters more than blue garments and floats, the institution decided.

RELATED: The Tory MP who made his peace with Pride Week

It turns out Chaffin and a deputy chief were part of the meeting in which LGBTQ community members discussed police involvement and intimidation concerns, according to Voices, an advocacy group for LGBTQ and other marginalized groups in Calgary. This initial discussion separates the city’s encounter from that of Ottawa or particularly Toronto, where Black Lives Matter issued their demands during a dramatic sit-in that temporarily halted last year’s parade. In Alberta’s largest city, a private meeting and written statements eased off tensions.

Toronto’s episode helped set a kind of template for demands and conditions for police involvement in Pride; but in Western Canada, another model has emerged for how police react. In Winnipeg, a handful of officers marched in rainbow-heart T-shirts instead of uniforms, and a senior officer said parade organizers’ stance led to “conversations with the community that we wouldn’t have had otherwise.”

Vancouver Pride and the city’s police agreed in advance on a compromise: officers would march as part of the City of Vancouver’s delegation in the parade, and 20 per cent of officers would be allowed to wear uniforms (Edmonton Pride, meanwhile, accepted police officers in uniform, as in past years).

It’s worth noting that the Calgary Police Association has declined to weigh in thus far; police unions in most cities have reacted to uniform bans with far less restraint than their respective police brass. But so far, Ottawa and Toronto activists have reason to look enviously at how neatly police in Calgary tamped down the sizzle of a situation ready-made to produce controversy and hostility.