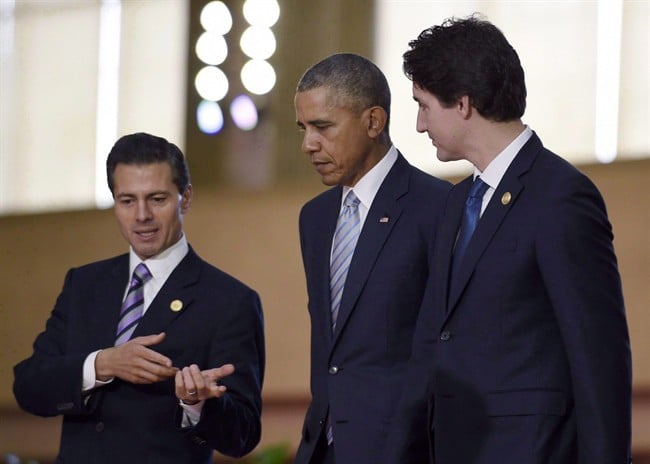 OTTAWA — A group of female human rights activists from Mexico is calling on Prime Minister Justin Trudeau to show his true feminist credentials and challenge their country’s president on its human rights record.

Trudeau is scheduled to host Mexican President Enrique Pena Nieto during a state visit next week before the North American leaders’ summit, which will also include U.S. President Barack Obama.

The so-called “three amigos” will focus on strengthening continental economic co-operation and will likely issue a statement that reinforces their shared commitment to fight climate change.

But four formidable Mexican women — all members of the Nobel Women’s Initiative — are calling on Trudeau to push Pena Nieto publicly on the carnage and violence that has gripped Mexico since the start of its war on drug cartels a decade ago, especially its effect on women.

The internationally recognized activists, representing torture victims, missing people and other victims of abuse by their country’s security services, were in Ottawa this week for talks with the government with the assistance of Amnesty International.

In a letter to Trudeau, Amnesty asks him to place human rights issues at the forefront of his discussion with his Mexican counterpart, citing the disappearances of 27,000 Mexicans since the country embarked on its bloody war against drug cartels in 2006.

Trudeau and Pena Nieto struck up an easy friendship when they met last fall at a pair of international summits in Turkey and the Philippines — their photos were jointly splashed across the front page of a Manila newspaper that declared them “APEC hotties.”

“This is the propaganda campaign of Mexico. It’s fabulous. They’re really very, very good. I don’t know who could be a friend of Pena Nieto,” said Marta Sanchez, the co-ordinator of an organization that’s trying to bring justice to the families of 120,000 migrant workers who disappeared between 2006 and 2015.

Trudeau can affect change in Mexico, she said, “by not letting (Pena Nieto) get away with it, saying, ‘Hey, I know what’s going on down there and I’m concerned.”’

Sanchez and her three colleagues point to numerous reports by organizations such as Amnesty, Human Rights Watch and others. They also cite a March 2015 report by the UN special rapporteur on torture.

Juan Mendez wrote that torture of detained people in Mexico was widespread and occurred “in a context of impunity, the aim usually being to inflict punishment or to extract confessions or information.” He blamed police, “all jurisdictions of the armed forces” as well as some doctors, defence lawyers, prosecutors and judges.

Brenda Rangel is the co-founder of an organization that searches for the loved ones of “disappeared” Mexicans who have gone missing in the last decade, including her brother ,who hasn’t been seen since 2009.

Since then, she said she’s been threatened with death, vivisection and having her eyes burned with a welding torch.

“This is something that the government doesn’t like,” Rangel said through a translator. “They don’t like people who are trying to make the truth visible or who, in their eyes, would throw dirt in Mexico’s beautiful face.”

The UN report linked the increase in violence to the escalation in the war on drug traffickers that former Mexican president Felipe Calderon began in 2006. Since then, annual complaints of torture and ill-treatment by authorities topped 2,100 in 2012, after an average of about 320 a year before 2007.

When Trudeau and Obama meet their Mexican counterpart next week, they need to “open their eyes and not trust what Pena Nieto says” about the rights situation in Mexico, said Claudia Medina, the founder of Mexico’s Breaking the Silence campaign, which highlights violence against women by her country’s security forces.

Medina became an activist after her 36-hour arrest in 2012, when she was subjected to electric shocks, strangulation and sexual torture to force her to confess to organized crime links. Charges against her were dropped earlier this year.

“Our own lives may be at risk and we do not trust our Mexican authorities.”

Alex Neve, head of Amnesty International Canada, said he wants Trudeau to raise human rights issues with Pena Nieto during their bilateral meetings, and in talks with Obama, so they aren’t “pushed to the side.”

“They need to be right at the heart of the exchanges that happen between our two governments, including at his (Trudeau’s) level.”

Neve also called on the federal government to lift its visa on Mexican travellers, calling it a barrier to Mexicans seeking sanctuary from abusive situations.

Sources have told The Canadian Press that the government, which has already committed to lifting the visa requirement, intends to announce its plans for keeping that promise when Pena Nieto is in town next week.

Canadian officials are pushing to have the plans linked to the implementation of a new electronic travel authorization system that was supposed to have been in place by March of this year but has been delayed.

They have concerns about the changes resulting in a spike in asylum claims; among the options being negotiated with the Mexicans is the ability to re-impose the visa requirement if the number of claims gets too high.