Humans don't like to see animals suffer. But we've never stopped the suffering.

Cruelty to animals became an issue in the late 19th century. The solution was to banish them from sight. 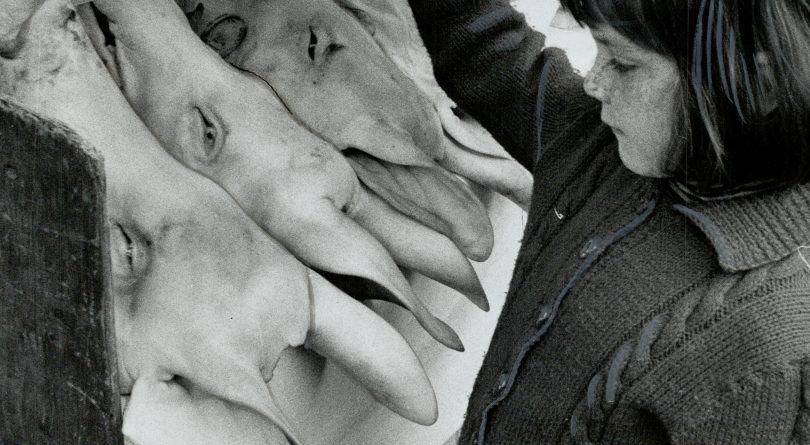 On Sept. 8, 1827, a group of American hotel entrepreneurs arranged for the Animal Boat, a leaky wooden craft carrying two bears, a bison, a fox, a raccoon, an eagle, a “vicious” dog, a cat and four geese, to go over Niagara Falls in a bizarre life-vs.-the-elements show. The animals, save for the hopeless eagle left chained to the deck, were released from their shackles at the last minute, presumably to give them a fighting chance. Except for the bears, who were spotted swimming safely to the Canadian bank of the Niagara River, none emerged alive as their boat was dashed to splinters.

The repulsive stunt, almost inconceivable to modern values, was a giant hit in its day, drawing enormous crowds that filled empty off-season restaurants and hotel beds. The overall positive public response of 1827 highlights a key conclusion in Boston University historian Andrew Robichaud’s Animal City: The Domestication of America, one echoed in other recent explorations of the place of animals in the evolution of modern cities. By the 1870s, North Americans would have been just as appalled by the Animal Boat as their 21st-century descendants. Between the first third and the last quarter of the 19th century, a revolution in human-animal affairs unfolded in the continent’s cities.

It was sweeping in its practical results, banishing from urban centres—and the public gaze—domestic animals and the trades that turn them into consumer products, and more subtle in its effects on social and individual attitudes. Contemporary North Americans remain the heirs of that revolution, and not just in our urban landscapes, which still bear the marks of areas set aside for animal industry—consider Toronto’s Stockyards neighbourhood or San Francisco’s Butcher Town. The great change—“post-domesticity,” as scholars call it—also sank deep into our cultural DNA. It’s still at the base of our concepts of how we should use and relate to animals, even as discoveries in animal science, rising trends in veganism and vegetarianism, and our almost literal adoption of pets into our families all herald a new development in contemporary thought.

READ MORE: A backyard pigeon ban that goes to the heart of good government

In 1842, Charles Dickens wrote home to London about the sights of New York City’s Broadway: smart shops, brilliantly dressed ladies and “two portly sows”—soon joined by “six gentlemen hogs”—strolling without notice among them. The British novelist went on to fill two pages with New York pig observations, but the porcine garbage cleaners were not the only animals to be found in Manhattan or other cities. Since the dawn of domestication, urban dwellers had reproduced country living as best they could, in order to feed themselves.

In what York University environmental historian Sean Kheraj calls the pre-industrial “pedestrian city,” food sources needed to be close at hand. Kheraj, who takes his students on walks through the original heart of Toronto to show them “the different places in which animals were central to the political and economic life…in the early 19th century,” begins at the St. Lawrence Market. “It’s been market square in Toronto since before the city was incorporated,” he says, “for decades the only place you could buy fresh produce and meat in a city where there were no automobiles or street railways. All of Toronto was within one-kilometre walking distance of the market—live any further away and you’re a farmer.” Toronto’s first city hall was an outgrowth of the market, Kheraj points out, “because the market was the place where people had to gather … [and] go for food.”

But an increasingly prosperous Victorian-era middle class began to object to the sights, sounds and smells of the animal world. They winced at the cruelties inflicted before their eyes, and their children’s, on herds driven to slaughterhouses through the streets, at dogs pulling carts and at free-range pigs. They had new ideas about cemeteries and what was allowable in them; with Boston leading the way in 1830, grazing in graveyards—a traditional feedlot for the urban poor—was banned across the continent. Boston Common and other green spaces were also soon cleared of domestic animals, in accord with the emerging ethos of parks as places of refined leisure.

Meanwhile, working-class citizens, who lived in crowded conditions and increasingly earned their living outside the home, found it hard to care for large animals. Private ownership of pigs and cows plummeted, while urban chicken populations continued to rise into the 20th century. Powerful economic and social factors combined to drive the domestic animal industry to the urban fringes. “It was hard for 19th-century people to really imagine a world completely devoid of animal suffering,” says Robichaud. They viewed their real-world, aesthetic and moral problems with the human-animal relationship “in practical terms, which was to say, they asked how can we minimize suffering.” Getting it out of their faces was the effective answer.

RELATED: Vancouver’s koi have looked into the face of death. It has beady eyes.

The change happened in fits and starts, with unexpected twists. City households parted with their cows even as milk consumption began to climb. That meant people bought it from street sellers who obtained milk from the small urban dairies that sprang up before transportation from the countryside was feasible. Those dairies, in turn, made common cause with distilleries. The latter needed a way to dispose of their “swill,” the mash of fibrous slush left over after whiskey was distilled, and the former needed cheap fodder. The thin, blue-tinged milk produced by swill dairies was regularly adulterated with anything from chalk to plaster of Paris to thicken and whiten it. American reformers like Sylvester Graham—who later had a cracker named after him—railed against the swillers. But it was only the development of efficient rail links to rural dairies that finally shut them down.

When railways completed the exodus of large food animals from the city, they simultaneously sparked an explosion in horse numbers. “People tend to assume that power sources are completely successional,” says Robichaud, meaning the idea that mechanical power replaced muscle power in all fields of activity at the same time. “But there’s a lag from steam to electricity and oil.” Railways were bringing in vast food supplies—200,000 litres of milk daily to New York—but “once you get it into the depot, how do you bring it to the different stores across the city? Horses.” By the start of the 20th century there were tens of thousands of horses in big cities, 100,000 in New York alone; almost all were gone by 1920, made obsolete by automobiles and electric trolleys.

The intricacies of the horse trade and the animals’ effect on the urban environment is dramatically illustrated by the Great Epizootic of 1872. In September that year, horses in Toronto began coming down with a debilitating, although not fatal, variety of equine influenza. Within a year, as trains moved horses about for breeding or work purposes, the disease had spread from Canada as far as Central America. Horse-drawn public transport was severely disrupted, and city dwellers often had to pull their own carts—even the Apache Wars waged by the U.S. Cavalry saw several clashes take place on foot. “It was like the way the SARS outbreak was spread by air travel,” says Kheraj, “a kind of precursor, even before the Spanish influenza of 1918, that showed how modern transport can connect populations of species across thousands of kilometres.”

The urban ecology was also upended by the banishment of pigs: their competitors for city garbage, primarily rats and dogs—but in Toronto, which still bears the name Hogtown, raccoons, too—expanded their populations. Dogs were a special case: they were prize possessions for the wealthy, but there were also many strays in cities and consequent rabies outbreaks. In Toronto and Montreal, Kheraj says, “the police had campaigns of dog poisoning, and Winnipeg town records show the mayor complaining about being chased by dogs on his way to council meetings.” But it is an extraordinary legal case in New York that best captures the uncertainties about dogs and, by extension, all animals.

Humane organizations appeared in both Canada and the U.S. in the wake of the American Civil War; the 1866 establishment of New York’s Society for the Prevention of Cruelty to Animals was followed three years later by the Montreal SPCA. Some of the SPCA’s earliest actions were taken against animal pens and slaughterhouses, but as those trades moved to the outskirts, often beyond SPCA jurisdiction—and, as Robichaud notes, beyond the gaze of concerned citizens—their attention turned to creatures still found on city streets. The San Francisco SPCA’s sole salaried employee packed a pistol and spent much of his time shooting suffering horses.

In 1874, a Manhattan lawyer angered by the sight in a shop window of a visibly distressed dog walking a treadmill that operated a cider press, laid a complaint with the SPCA. The society tried to settle the issue with its tried-and-true solution. Couldn’t the dog and press be moved to the basement, out of sight? No, they couldn’t, replied the owner—the dog was in the window “as a kind of advertising.” In court, an eminent sportsman who later fought with the SPCA over the cruelties inherent in fox hunting testified that this sort of labour was unworthy of man’s best friend. The case turned on what we would now call agency: could the dog stop labouring if he wished? No, he couldn’t, it was decided, and the owner was found guilty of cruelty.

The agency issue rose to even greater prominence when the owner replaced the dog with a child, a boy of about eight, who looked to onlookers as exhausted as the dog. The SPCA was outraged by the act and even more outraged to learn neither it nor the city had any jurisdiction over “freely” contracted child labour. The first societies formed to combat the abuse and exploitation of children, in fact, postdate SPCAs by a decade. But the former were inspired by the latter: New York SPCA veteran Elbridge Gerry helped co-found the Society for the Prevention of Cruelty to Children, he said, because a child deserves “at least the rights of the cur in the street.”

The cider press case, in all its eye-popping aspects, neatly captures the complexities of 19th-century thought on the rights of living beings. Yes, there was a genuine loathing of gratuitous cruelty to animals, but for city elites, the problem was primarily solved by shoving what was, and still is, seen as necessary exploitation into the shadows. In that regard, it’s worth noting that the most potent weapon wielded by contemporary animal activists has always been imagery, from the bloodstained ice of the seal hunt to video smuggled out of abattoirs. In our evolving post-domestic relationship with animals, this much is certain: we can’t stand to see them suffer.

This article appears in print in the February 2020 issue of Maclean’s magazine with the headline, “Animal farm in the city.” Subscribe to the monthly print magazine here.