Humboldt crash: How to design a safe highway intersection

Jason Young, an engineer with consulting firm Advantage Forensics, on safety standards, rural crossroads and the upside of roundabouts 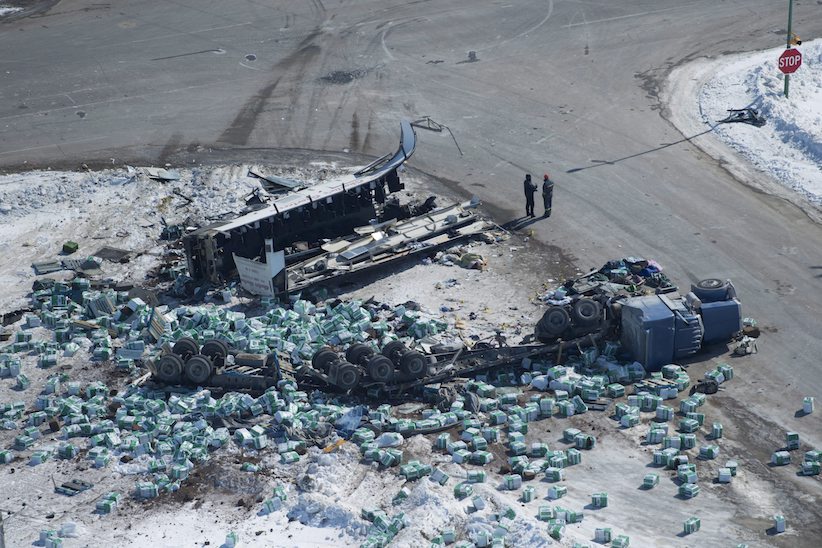 The wreckage of a fatal crash outside of Tisdale, Sask., is seen Saturday, April, 7, 2018. A bus carrying the Humboldt Broncos hockey team crashed into a truck en route to Nipawin for a game Friday night killing 14 and sending over a dozen more to the hospital. THE CANADIAN PRESS/Jonathan Hayward

The Humboldt bus crash that killed 15 near Tisdale, Saskatchewan on Friday has focused attention on safety concerns at Armley Corner—a crossroads marked by red flashing lights where Highway 35 meets Highway 335. The intersection was also the scene of a fatal crash two decades ago, and although better marked than many, it is one of hundreds in a province where long, straight roads and highways form a massive gridiron on flat terrain. With questions swirling about highway design and best safety practices, we turned to Jason Young, an engineer with Advantage Forensics, an Ontario-based consulting firm. This is an edited transcript of our conversation.

Q. What does your firm do?

A. We consult as expert witness engineers for insurance companies, plaintiffs and defendants and investigate collisions. We do the civil litigation reports.

Q. Do your investigations include how a highway is constructed?

A. Absolutely. A plaintiff may try to show there is a road design defect or design issue. They must prove two things, that the road doesn’t meet standards and that the deficiency had something to do with the accident. The road authority is often brought in as a defendant and has to show there is nothing wrong with the road.

READ: How you can help support the families of the Humboldt Broncos

Q. Who sets the standards for road design?

A. Standards for road design in Canada are generally set by Transportation Association Canada (TAC). TAC puts out standards for rural and urban roads and they are well adopted across the country.

Q. Why are standards important?

Q. Why are there so few traffic signals on rural roads and highways?

A. In rural settings the reason you don’t have traffic signals at intersections is because you have much less traffic volume on side roads. The goal in road design is to optimize traffic flow. If you’ve got 98 percent of vehicles on the main road and two per cent of vehicles on the side road, in that kind of situation the ideal design would be a two-way stop scenario.

Q. Are there always stop signs at rural crossings?

A. Generally, most minor road intersections in rural situations have two-way stop signs. There are still occasional locations in the country that have yield signs. But yield signs have generally been phased out across most of Canada.

Q. How do road authorities decide what is needed?

A. You almost plug in the numbers to a very complicated formula page and you’ll get a result whether signals are warranted or not.

Q. Are there any new developments making rural crossings safer?

A. Roundabouts have become popular in rural Ontario after a trial study was done at major traffic crossroads between cities. And collisions have gone down. These are not small roundabouts, they are larger than your typical intersection. Typical speeds are about 30 km per hour, but it’s better than a stop.

Q. What are the factors that go into road and highway design?

Q. So why aren’t all intersections perfect?

A. Road design is a balancing game. There are the ideal specifications for every aspect of the road and then there are the practical limitations. For example, property lines from 100 years ago that are close to the intersection. The municipality might not easily be able to change the property lines.

Q. What do collision histories show?

A. They are important. They show certain roads need more attention and have to be fixed because they aren’t working. There are always going to be collisions at intersections, because intersections are conflict areas. But when you find sections of road that have unusually high collision rates, that’s an indicator that one of the problems at that intersection needs to be fixed right away.

Q. Is money a factor?

A. Yes. Some of the roads have been around forever and the intersections might not be ideal, and the budget has to found to fix them up. Not just for paving, but for design improvements. And there are not infinite funds.

Q. In the case where a municipality is found to have known about a sub-par intersection, what happens in the event of a bad accident?

A. In a case where there is a road deficiency, where the standards have not been met, and it is relevant to an accident, a municipality will end up having to pay out a large insurance payment for that accident. It does happen all the time.