Star athletes and NHL teams gave generously. But the donors' names otherwise read like those you'd see on the boards of any junior hockey arena 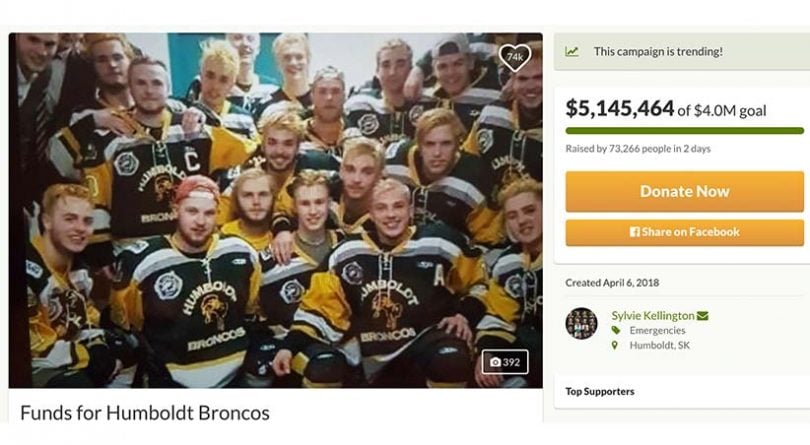 (Screengrab from the GoFundMe page for the Humboldt Broncos)

When someone dies—especially in small towns, perhaps—you send food, to sustain the survivors, to provide practical help in the difficult days ahead, or simply to do something, because you can’t do nothing.

Over the weekend, as Humboldt, Sask. reeled in the wake of a horrific bus crash that killed 15 members of the town’s Broncos Junior A hockey team, absent the realistic possibility of sending food, tens of thousands of people and organizations from all over the place flooded a GoFundMe account set up to aid the families of the injured and the lost. By midday on Monday, more than 73,000 separate donations totalling more than $5.2 million had poured in.

That’s about $177,000 for each family of those who died or were hurt in the crash—an amount many will no doubt welcome as they face a deluge of unexpected expenses, from para-medical fees and hotel bills for relatives of the injured to funeral expenses for those who lost loved ones.

The fund was set up by Sylvie Kellington, who identified herself as a resident of Humboldt, which is home to about 5,800 people. “Money will go directly to families to help with any expenses incurred,” she wrote on the fundraising site. “Myself and the staff of GoFundMe [are] now in direct contact with the vice-president of the Humboldt Broncos, and plans are under way to move money raised.”

READ MORE: A 16-year-old phenom, a gifted captain and a beloved coach are among the dead in Humboldt bus crash

On her Facebook page, Kellington reported that $1,400 accumulated in the first hour after she established the fund on Friday evening, just hours after the bus collided with a tractor trailer as the team travelled to Nipawin for a playoff game. Donations were up to $15,000 two hours after that, and surpassed a million dollars by Saturday afternoon, Kellington said on Facebook.

The effort is now the largest GoFundMe campaign ever undertaken in Canada, and one of the site’s five biggest worldwide. A spokesperson said donations have come in from nearly 60 countries, but the majority are from Canadians.

The help arrived in amounts large and small, from people and groups tied to Humboldt by hockey, geography, or just a shared sense of grief.

There was $20,000 from the Pittsburgh Penguins, $15,000 from Bauer and $15,000 from Husky Energy. The Edmonton Oilers, Calgary Flames, Toronto Maple Leafs and Chicago Blackhawks chipped in thousands each through their teams or alumni associations. On Sunday afternoon, L.A. kings defenceman and Edmonton native Dion Phaneuf donated $10,000, while former Oilers forward Shawn Horcoff sent $1,900 and Drew Doughty, another Canadian-born Kings blueliner, chipped in $1,500 over the weekend—or at least, someone using their names did. (Phaneuf’s baby daughter Zaphire appeared to have donated $1,000, too.)

RELATED: Ron MacLean: The arena is where we will gather to mourn, remember the Broncos

Then there were the thousands of more modest contributions that rolled in. They came from minor, beer league and junior hockey teams of every level and from seemingly every corner of the country, and from local Dairy Queen locations, security companies, industrial supply shops, farming outlets, auto repair garages, curling clubs, mom-and-pop cafés, police associations and trucking companies. They also arrived in the names of thousands of individual families who were surely hugging their children a little tighter as they thought of those who no longer could.

In the end, minus some marquee names, the people and businesses who surrounded the Humboldt Broncos in the face of unimaginable loss, contributing what they could because they couldn’t do nothing, look exactly like the names that would have encircled the Broncos and every other hockey team like them on the rink boards in their arena, and so many others just like it.