Why populism and identity issues are set to dominate Quebec politics, perhaps one more time, in the year ahead 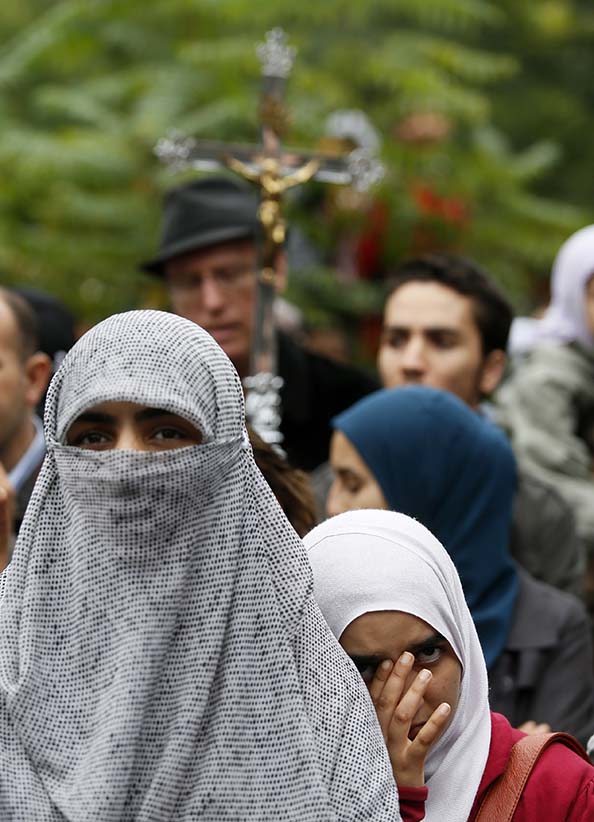 People gather to protest against Quebec’s proposed Charter of Values in Montreal on September 14, 2013. (Christinne Muschi/Reuters)

There are two ways to view Quebec’s decade-long obsession over the place of religious minorities in the province’s proudly secular society.

The pessimist would say that devoting time, energy and attention to what a tiny fraction of people can and can’t wear in the name of their religion is, at best, a waste of time. At its worst, such a debate can make scapegoats of these very people, particularly when it is sucked into the vortex of an election campaign. Examples include Quebec’s election in 2014, and the U.S. presidential race of 2016.

An optimist believes such a debate is necessary, particularly in Quebec’s linguistic and social micro-climate. The province, like most Western societies, is grappling with profound demographic change; better to air grievances in the open than let them fester in the dark (and online).

Identity issues have been at the forefront of Quebec’s political sphere long before a certain flaxen-haired billionaire had even pondered his eventually successful run for the highest office in the free world. And they will once again dominate the country’s second-largest province well after Donald Trump becomes president in January.

Quebec is home to a majority population of about 6.6 million French speakers, where about three-quarters of the 50,000 immigrants who arrive here every year settle in the region of Montreal. The city is multicultural and multilingual. The rest of the province is largely white and French.

The populism resulting from this unique demographic circumstance, which surfaced in the 2007 election campaign, had a distinctly Trumpian narrative to it. To wit: the political elites in Quebec City were corrupt and out of touch. Immigration had turned Montreal into a Babylonian hellhole, and threatened to do the same to the hinterland. By throwing out the first and radically curtailing the second, Quebec would be . . . well, it would be great again.

Two political parties, first the right-of-centre Action démocratique du Québec (ADQ) and then the Parti Québécois, attempted to harness this resentment. Both failed miserably. The ADQ ceased existing in 2012, while the PQ suffered one of the worst defeats in its history in 2014.

Still, issues of immigration and religion remain a stubborn constant in Quebec politics. Both the PQ and the Coalition Avenir Québec, the successor to the ADQ, have introduced plans to cut immigration levels. Both have equated the rise in immigration under successive Liberal governments to the decline of French in the province—a contention disproved by several recent Quebec government studies.

PQ Leader Jean-François Lisée said burqas should be banned before “a jihadist uses one to hide his movements.” The CAQ recently ran an advertisement suggesting the chador would become commonplace in Quebec classrooms should either the Liberals or the PQ form the next government. (In truth, body-covering Muslim garb is about as rare in Quebec as Maple Leafs fans.)

MORE: A short history of scapegoating Muslims in Quebec

Yet despite all this rhetoric over the last 10 years, Quebec remains a comparatively welcoming province. At 3.2 per 100,000, police-reported hate crimes in the province are below the national average of 3.7—and well below Ontario’s average of 4.8, according to the most recent Statistics Canada data.

It is in the crucible of the debate that the province has developed guidelines for so-called “reasonable accommodations” of religious and cultural practices. In 2017, Quebec’s National Assembly will vote on Bill 62, which would compel anyone giving or receiving a public service to do so with their face uncovered—unless the temperature, not religion, dictates otherwise. It is the second time in six years that the province has attempted to pass such a thing.

The bill has its critics, and will almost certainly be the subject to a court challenge should it become law. Yet in limiting its reach to the public service, the legislation strikes a balance between religious freedom and state religious neutrality. (Such is decidedly not the case in France, where the very act of wearing a religious face covering in public is illegal.) The final vote on Bill 62 will take place outside the context of an election campaign, when instances of chest-thumping vitriol tend to be lower. The optimist hopes cooler heads will prevail.

While America is hardly new to the caustic politics of race and identity, it raced to new lows during the last presidential campaign. Trump’s victory has invigorated populist movements around the globe; suddenly, the world is awash in worry over immigration and religion.

In Quebec, this sort of thing is old hat. Long the outlier on the identity front in Canada, Quebec’s take on matters of religion and immigration suddenly seem sensible, even desirable, in a world of border walls and Muslim bans.