If I trade in my booze for pot, will I lose weight?

There are many reasons that pot, though calorie-free, probably won’t whittle your waistline 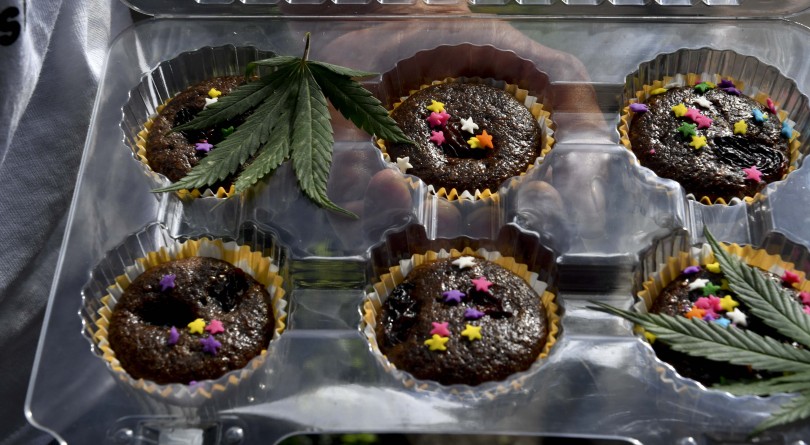 Why isn’t the Weed Diet all the rage? Theoretically, it works: Sub out a nightly 6oz glass of red wine to save 140-ish calories a day (that’s 980 calories a week and almost 4,000 calories in a month—more than enough to lose a pound). But there are many reasons that pot, though calorie-free, probably won’t whittle your waistline.

Most immediately, explains Vancouver-based nutritionist Kendra Perry, “marijuana will activate your endocannabinoid system, which regulates many processes in your brain including mood, memory, pain-sensations and—you knew this was coming—appetite. “This makes you hungry, so you get the munchies, and you’ll probably replace all that booze with bad food very fast,” she warns. Yes, the munchies are real. Studies in mice have shown that THC significantly increases their ability to smell food, which in turn makes them eat more. So those Doritos are extra irresistible simply because you can smell and taste them better.

That said, the same is true of celery sticks, if you can convince yourself to reach for them instead (good luck). And certainly not everyone gets the munchies. “If weed doesn’t increase your appetite, and keeping in mind of course that weight loss is a complex issue, I’d say potentially you could lose weight,” says Perry.

In the longer term, the quality of the weed you smoke also matters. “Depending on who’s growing it, there are different chemicals involved, and these could be obesogens,” she says. These foreign compounds need to go somewhere, she explains, “so your body will make more fat to store these toxins in your system.”

Lastly, consider weed’s effect on your motivation levels. Most studies have found that the stoner’s reputation is not all wrong; long-term cannabis users tend to produce less dopamine, which usually anticipates pleasure and produces motivation for reward. But other research shows marijuana stimulates concentration and creativity (and therefore motivates to create). Most stoners are the first kind, landing lazily on the couch rather than doing anything active. If you’re really hoping for weed-induced weight loss, try your best for the latter. “To distract yourself from the munchies, go out and do something,” says Perry. If you can train your stoned brain to love brisk walks, then your Weed Diet might work after all.