If you have urgent federal spending requests, put your hand up now 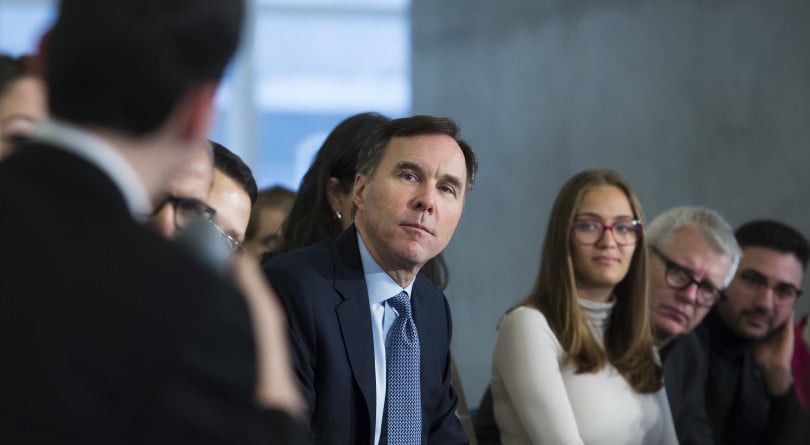 Finance Minister Bill Morneau, centre, listens to a question from a Ryerson University student as he launches consultations for the Budget 2020 at a town hall discussion in Toronto on Jan. 13. (Nathan Denette/CP)

Transportation Safety Board of Canada press conferences aren’t typically magnets for national reporters, but today’s update in Ottawa was a big exception. TSB chair Kathy Fox told journalists that two of the agency’s staff were on the ground in Tehran and primed to assist the investigation into the downing of Flight 752. Fox also said a second team of investigators would eventually head to Iran to assist in the analysis of the flight’s black box data. Here’s everything we know about that investigation so far.

On the weekend, Prime Minister Justin Trudeau said he was “furious” about the downing of Flight 752. Yesterday, he told Global News that rising tensions in the region played a major role in the disaster: “If there were no tensions, if there was no escalation recently in the region, those Canadians would be right now home with their families.” The PM didn’t out-and-out name Donald Trump, of course. But he continues to not absolve the U.S. president of blame. [Global News]

Foreign Minister Francois-Philippe Champagne says his ministry is investigating ugly reports that families of Flight 752’s victims are being harassed by Iranian officials. Champagne was responding to a Twitter video that appears to feature a woman desperately calling on the Canadian government to repatriate her son’s body. Ukraine’s ambassador to Canada Andriy Shevchenko told CBC’s Ottawa Morning that repatriation of victims’ bodies could take months. [CBC News]

Champagne will head to London later this week. On Thursday, he’ll host a meeting of the International Coordination and Response Group assembled in the wake of Flight 752’s downing. That’ll happen at Canada House, and include reps from Canada, Ukraine, Sweden, Afghanistan and the United Kingdom.

Budget season: Finance Minister Bill Morneau launched his annual pre-budget consultations yesterday at Ryerson University. Morneau gave a brief lesson in economics to the students in the room. The feds have to rely more on fiscal policy (how much they tax and spend) because the Bank of Canada has few levers to pull on monetary policy (because interest rates are already so low). Thanks for the 4-1-1, Minister.

That was the official launch of these consultations, but of course lobbyists didn’t wait for Jan. 13 to make their case to government. Federal records show 41 meetings on the subject so far dating to the end of the last election—including three such meetings just the day after the election (here’s to you, Canadian Wildlife Federation and Nature Canada). The Toronto Financial Services Alliance—is it merely coincidence the group’s abbreviation is TFSA?—is the most recent listing.

Tell Ottawa what you think about assisted dying: Justice Minister David Lametti launched a two-week consultation on how to change the federal assisted dying law to comply with a court ruling. Lametti has a deadline. Last September, a Quebec Superior Court judge called the law too restrictive—and gave the feds six months to fix it. If the Liberals can’t pass amendments, part of the law will be suspended in Quebec. Mark your calendars for March 11. [CBC News]

Karina Gould, the minister for international development, left yesterday on a five-day trip to Congo and the Democratic Republic of the Congo. Gould, who last week gave a spirited defence of Pierre Trudeau’s legacy at a University of Toronto conference, will meet with the region’s major players. Global Affairs Canada tells Maclean’s the minister has meetings planned with Congolese president Denis Sassou-Nguesso and DRC president Félix Antoine Tshisekedi Tshilombo. She’ll also sit down with top UN officials.

Truth, reconciliation and compensation: Yesterday, Ottawa announced that Indigenous people who attended Federal Indian Day Schools—survivors who were left out of residential school settlements—were eligible to apply for a minimum compensation of $10,000, and could receive up to $200,000. The announcement comes more than a decade after Garry McLean launched a multi-billion dollar class-action lawsuit. [APTN News]