'I'm mildly curious about my future' 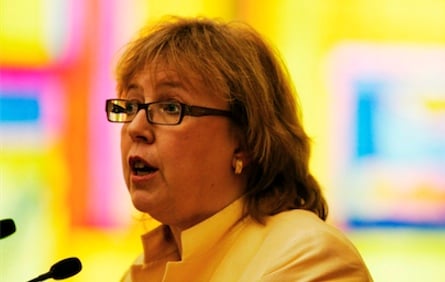 The phone rings 10 minutes past the allotted time and Elizabeth May apologizes. Seems she lost track of time after getting in late the night before after a weekend in Whitehorse. There she delivered a speech—to an overflow crowd, she says—and signed copies of her new book, Losing Confidence: Power, Politics and the Crisis in Canadian Democracy. She met with Yukon native leaders and took part in a fundraising dinner of Jamaican cuisine. And she held a press conference and conducted a workshop with young people on “water issues” and visited a community BBQ and invited locals to meet her for coffee at a bakery. “And I got to church,” she says.

And, in case you were wondering, carbon offsets were purchased—twice the necessary amount in fact—to counter any damage to the environment resulting from her travel.

She was calling from Vancouver, where there was more to do. After that she was to visit the riding of Saanich-Gulf Islands, where, perhaps ultimately, the tirelessly effusive leader of the Green party may yet meet her Waterloo. “I’m mildly curious about my future,” she says later, pressed to speculate about what may come whenever the next election is called. “My grandmother’s sister had this great expression, ‘Life has far more imagination than you or I.’ And I’m very confident that I have an interesting life. I have loads of interests. In or out of politics I have a lot of ways in which I think I can help my community and make a difference and I’ve done that since I was in my teens, I’ve been involved in trying to contribute something.”

For now though, she is in politics. And the goal remains the same as it has been for three years: winning a seat in Parliament.

In 2006, she ran in a by-election in London, Ontario, winning 9,845 votes, but finishing more than 3,000 behind Liberal Glen Pearson. Then she overreached—taking aim at Nova Scotia’s Central Nova riding, a Conservative stronghold mostly occupied by one member or another of the MacKay family since 1971. Stephane Dion, the sympathetic, if ill-fated, Liberal leader, agreed not to run a candidate against May. Exiled Liberal MP Blair Wilson momentarily made himself a Green, giving the party its first MP. And with Dion supporting her inclusion, May talked herself into the televised leaders debates and held her own. She talked of an upset in Central Nova and on election night, she won 12,620 votes. Unfortunately for her, Peter MacKay claimed more than 18,000.

Doubt and recrimination followed—up to and including discussion of her teenage daughter’s involvement in the campaign—but May stayed on and new emphasis was put on finding her a riding she could win. If the Green party was to move forward, it needed an MP. And if the Greens were to ever have an MP, the obvious candidate was May. All of which brings May now to Saanich-Gulf Islands, just north of Victoria. As was officially announced today, that’s where May will make her third, and possibly final, attempt to win a seat on the floor of the House of Commons—a cherished spot 20 feet down from the seat in the first row of the visitors’ gallery she occupies most afternoons in the spring and fall.

“This seems,” May said some weeks ago, “the logical decision.”

There are those who would quibble with May’s choice of adjective. Saanich-Gulf Islands has been held by the Reform, Canadian Alliance or Conservative parties since 1993. Gary Lunn, the minister of state for sport, has occupied the seat since 1997. Last fall, with the Liberals running well-known environmentalist Briony Penn and the NDP’s candidate having to withdraw after disclosure of a past incident of public nudity, Lunn was thought to be vulnerable, but still managed to win with nearly 28,000 votes. Penn finished second, just 2,500 votes behind. Another 6,700 votes went to Green candidate Andrew Lewis while the departed NDP candidate, whose name remained on the ballot, managed to win 3,700.

Penn is now supporting Renee Hetherington, another noted environmentalist, for the Liberal nomination. The NDP believes they have a couple of strong possibilities themselves. And with May inevitably boosting the Green vote, Lunn would seem once again set to benefit from division. “I think all of us would love to see Elizabeth in Parliament, just to shake the bloody place up because she’s excellent at what she does. But the numbers don’t add up. I know this riding,” says Penn, who knows and generally seems supportive of May. “If there’s two strong women candidates running on basically the same platform, Gary Lunn’s going to laugh all the way to Ottawa again. And it’s a tragedy.”

In the meantime, May will be challenged first for the Green nomination. In an online submission posted last weekend, Stuart Herzog, an environmental activist and former Green candidate on the provincial level, stepped forward to take issue with May’s mission. “Federal council has defined its goal for the coming election as to get just one Green MP elected, namely Elizabeth May, the current leader,” he wrote. “They believe that the Green Party won’t be effective until it can belly up to the negotiating table and become part of the anti-democratic, secret deal-making process. I believe that they are wrong.”

May is typically undaunted. Herzog’s challenge, she says, proves only the contrary—that the Greens are committed to fundamental democracy. And whatever the results of the last election, she argues, there is the reality now. “It’s unfortunate that it comes out with a focus on what the Greens see in the riding,” she says. “I think it’s the other way around. I think it’s what people in Saanich-Gulf Islands seek from their elected representative. And right now I see a big disconnect, and I hear a big disconnect from people in the riding, about their representative.”

Indeed, though pressed several times, May categorically rejects any attempt to apply back-of-the-napkin calculations to her candidacy. “It’s not an analytical crunching of numbers,” she says. “We’re looking at where is there a real appetite for change and a willingness to be a historical first, sending a Green to the House of Commons.”

Camille Labchuk, May’s former press secretary and now a member of the party’s federal council, is slightly less esoteric. Presented with the conventional wisdom that a riding such as Guelph, Ont., where Green support has improved over the last three votes, might make more sense, she undoes the notion with logic of her own. “In the last election, the Liberals ran the worst campaign ever in the history of the Liberal party, but Guelph still sent a rookie Liberal MP to parliament by a decent margin,” she notes. “Saanich, on the other hand, the Conservatives ran arguably their best campaign ever, and probably the best campaign they ever will run under Stephen Harper … yet Gary Lunn barely managed to hold on to his seat. There was a very strong anti-Lunn campaign, it just didn’t quite manage to crystallize enough around one candidate.” Both May and Labchuk arrive at approximately the same conclusion. “When you introduce someone like Elizabeth May into the equation, now you’ve got a rallying point,” says Labchuk.

All of which may actually come to pass. Or it may not. And therein lies what may be the final wager of May’s political career.

The party’s deputy leader, Adriane Carr, was recently quoted as saying that “for the first time ever, the Green party of Canada has written a campaign plan that is fully detailed.” May assures this was not an exaggeration—that the party was preoccupied with a set of by-elections last fall and wrong-footed when the Prime Minister launched a full election. And though she can no longer claim a sitting MP and nor count on the support of another party leader, she still believes she will be there when the leaders gather around a table and debate for the cameras.

On this, she takes comfort in recent polls. The Green party continues to win the theoretical allegiance of about 10 per cent of Canadians and, according to one recent survey, 41 per cent say they would like to see her win a seat in Parliament. That, she argues, demonstrates public interest, which justifies her presence.

Of course, when Canadians were last asked to confirm their support on paper, just seven per cent were so supportive of May’s side. And it is that conflict between perception and reality, hope and practicality, that continues to make May’s story so harrowing. All the more so now. The primary question—can she win?—remains. But it’s matched now with a more daunting follow-up—if not, what then? “Honestly, the thing that I fear most, and this is what I’ve said to Elizabeth, if she is declaring that this is the greenest riding in Canada … and she doesn’t win, what are we left with?” Penn says. “Her career is over. And I don’t want to see Elizabeth lost off the scene.”

May shoos away any talk of pressure. “I don’t even think about things like that,” she says. “The pressure I feel is around the Copenhagen summit coming up in December. The fact that we are running out of time to respond to the climate crisis. I don’t find politics particularly compelling as opposed to real life … My political fortunes are, honestly, in terms of my concerns, completely irrelevant.”

Discussion turns to other matters—how, for instance, the Greens would cut income taxes and employer contributions to employment insurance—then May is asked again to account for herself. For all the work she’s done, the effort put forth, and the possibility that it will all be for naught. May restates her thesis. “I think about the future quite a lot,” she says. “I think I think long term about the future more than other politicians, but unlike other politicians I don’t think the future is all about me.” Of course, she’s right. Except that it’s still her name on the ballot.