Calgarians are self-confident enough not to worry that the NHL would abandon them. And unlike Edmonton, the city doesn't need an arena to revitalize its downtown core 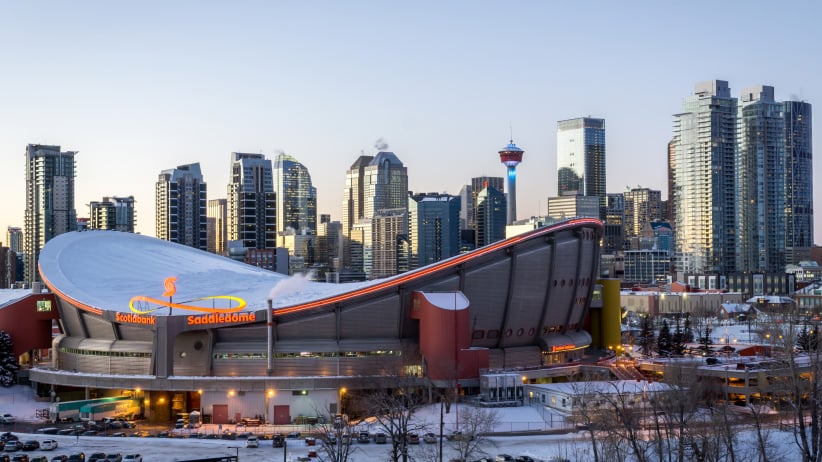 A lot of Calgarians would prefer watching hockey at the 34-year-old Scotiabank Saddledome to turning over tax dollars to NHL owners. (Darko Photography/Shutterstock)

What’s surprising isn’t that the Calgary Flames ownership walked away from the arena negotiations table, with an unsubtle wink-wink that maybe (just maybe! But we don’t want to! But you know …!) they’ll move the hockey team to another city. What’s surprising is that club CEO Ken King played that card now, when talks are at such an early stage, and the public mood in an economically hurting city couldn’t be more averse to sending truckloads of taxpayer dollars going anywhere, let alone to billionaire owners and their wish to bring the goal-scoring joy of Johnny Gaudreau and Lady Gaga gigs to locals who can afford the tickets.

King and lead owner Murray Edwards also thought, for whatever reason, that it raised stakes in their favour to have NHL commissioner Gary Bettman on hand Tuesday as their enforcer  to stick it to Mayor Naheed Nenshi and city council, to reinforce the old negotiating tactic of insisting negotiations are dead. “It will play out the way it plays out,” Bettman told reporters after King’s relative good-cop routine. “In the short term, nobody should doubt the Flames’ or their ownership’s commitment to this community, but at some point I envision without a new building there will be consequences that everybody’s going to have to deal with.” Oh, the ominous “but at some point,” and the vague “consequences”—those old canards. This came on the same day that Seattle announced its privately financed arena project, and after the Edmonton Oilers’ own dalliance with the same city during their arena debate. Seattle fans must be weary of seeing their city’s name in cut-out magazine letters on ransom notes.

This comes five weeks before civic elections and Nenshi’s bid for a third term, and Bettman urges concerned Calgarians to pressure politicians to salvage the team’s Saddledome replacement plans. It’s folly for the hockey executives to assume this pits Flames fans against Nenshi. King’s message will only appeal to that subset who believe (a) a real threat exists that the Flames will leave this lucrative Canadian market (b) that civic taxpayers aren’t doing enough to offer nearly $200 million toward a pro sports arena.

Nenshi’s council has reportedly offered to pay roughly one-third of the arena’s costs, with another third coming from a ticket surcharge and the rest from the Flames organization. The Flames refused, in part because King reasons that proceeds from a ticket surtax should be considered part of the owners’ contribution. In the club’s offer, the owner contribution and user fee would come closer to half the total cost, and public funds would cover the rest. This ratio resembles what the team pitched for a Flames arena and Stampeders football stadium megaproject two years ago, on a patch of contaminated soil near downtown that council was disinclined to swiftly scrub clean for sports’ sake. That bid was dead on arrival, leading to the current impasse regarding a lot adjacent to the 34-year-old Saddledome, on Calgary Stampede grounds. (Here, the two sides even differ on the size of the pie to carve up: city hall sources say the Flames’ roughly $500 million estimate overlooks a few infrastructure projects needed to make it viable.

At least in the Flames’ previous stadium-arena package offer, unappealing as it was, the city got something out of the deal: an amateur sports fieldhouse nested within the stadium. In Plan B, there’s nothing enticing the city to cough up more money.

Flames owners have unfortunately thought of this as part of the Battle of Alberta, that old hockey rivalry that tends to spill over into civic one-upmanship. “If we can beat the guys up north—apparently we can’t beat them on the building front, but maybe we can beat them on the ice,” Ken King said. Oilers owner Daryl Katz opened his shimmering new Rogers Place last year, while his fellow billionaire to the south, the oilman Edwards, has spent 10 years trying to make something work. Flames brass keep insisting on similar financing terms to what Katz secured in Edmonton.

But what Edwards, King and Bettman overlook is that Edmontonians didn’t just get an arena. They got the promise of downtown revitalization, a long-elusive spark to help replace those expanses of surface parking lots that spanned much of its stagnant core. Calgary, by contrast, already has its arena downtown, and if anything now suffers from overdevelopment in the core, with a 27.7 per cent downtown office vacancy rate. In Quebec City and Winnipeg, taxpayers were willing to cough up money as a way to lure back NHL teams, with mixed results (Quebec remains out in the cold). Even in Ottawa, where the city will soon reveal how willing it is to pitch in for a new arena west of downtown, the plan has the added appeal of redeveloping LeBreton Flats and liberating the Senators from their current Kanata highway exit hinterlands.

There’s no similar intangible to appeal to Nenshi’s council; just the arena’s 40-some annual NHL games, some other Flames-owned sport teams and big-arena concerts, the likes of which tend to skip Calgary and the frailties of its saddle-shaped roof. Calgarians are self-confident enough not to worry that the NHL would abandon this market.

One of Nenshi’s big perceived negatives is his arrogance, but King and Bettman have clearly outdone him on that score this week. And it’s not as though a conservative challenger to Nenshi will suddenly promise greater sums on behalf of taxpayers for an arena, and somehow get a better shot at winning that way.

A large portion of the Calgary populace will view ceding the arena-building race to Edmonton not as a loss, but as a win: that Cowtown didn’t acquiesce to its hockey barons’ demands. Until the Flames owners can appreciate that, they’ll be stuck in their current saddle.